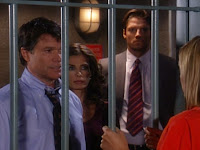 Welcome to your Wednesday morning television briefing. I had a lovely day yesterday sorting through the many, many comments left by readers about this week's episode of Chuck and settled in for an evening that included a well lush episode of Gavin & Stacey and a brand-new episode of Fringe.

NBC has renewed soap Days of Our Lives for an additional 18 months, a significantly shortened renewal when the previous deal had the Peacock picking up the long-running skein for five years. The new pact will keep Days on the air until September 2010 but there is a clause in the deal for an additional year-long extension if certain terms are met. (Variety)

E's Kristin has a new 15-second promo spot for the upcoming fifth season of Lost with some new footage, including a shot of Locke seemingly with a compass embedded in his hand. Just what does it mean? Who knows but I'm happy to see some new shots in the mix. (E! Online's Watch with Kristin)

Dexter's Desmond Harrington will appear in a multiple-episode story arc on CW's Gossip Girl, where he will play the younger brother of Bart Bass, which would make him Chuck's very young uncle. My prediction: look for Mr. Bass to get romantically entangled with Chuck's ex Blair, making for some very awkward family dinners. Harrington's first appearance is slated for early 2009. (Entertainment Weekly's Ausiello Files)

HBO has given a pilot order to Game of Thrones, based the "Songs of Ice and Fire" series of novels by George R.R. Martin, that it has had in development for two years. The pilot script was written by David Benioff (X-Men Origins: Wolverine) and D.B. Weiss (Kashmir) and follows a power struggle in a violent fantasy kingdom. Move marks a rare foray into fantasy for HBO. (Variety)

HBO is also developing period comedy The Review, about the staffers of an NYC literary magazine in 1987 immediately after Black Monday and a man who leaves the world of banking to take a position at the magazine, just as its very future is in jeopardy. Pilot script was written by Andy Bellin, who will executive produce with Scott Aversano. (Hollywood Reporter)

In other news at the pay cabler, HBO is developing Scar Tissue, based on the "unconventional, rock 'n' roll childhood" of Red Hot Chili Peppers' Anthony Kiedis and his relationship with his father Spider, who sold drugs and mingled with the rock elite on the Sunset Strip in the hopes of breaking into show business. Keidis will executive produce the project with Marc Abrams and Michael Benson. No writer is currently attached. (Variety)

Dave Grohl will make a guest appearance on the current season of Bravo's Top Chef an a November 26th episode entitled "Foo Fighters' Thanksgiving," where the contestants will try to impress the band during a tour stop in Rochester, New York. (Entertainment Weekly's Hollywood Insider)

AMC is developing legal drama Rectify, starring Walton Goggins (The Shield) as a man who is exonerated by DNA evidence after serving a lengthy prison term for a crime he didn't commit. Project is written and executive produced by Ray McKinnon; also on board to executive produc: Mark Johnson, Stephen Kay, and Goggins. (Variety)

FOX has signed a first-look deal with Ritchie Keen and Heath Corson for single-camera comedy pilot Living With Abandon, about the members of an abandonment support group who are foced to band together when their therapist commits suicide. Project, which was independently financed, has already been shot with cast members s Todd Grinnell, Ed Quinn, Melissa Peterman, Rachel Specter, and Nick Dodani. (Hollywood Reporter)

Sky1's Richard Woolfe has announced that he is leaving the digital channel to take up a position as channel controller at terrestrial Five. (Digital Spy)

Anonymous said…
Oooh. Great new Lost footage. I feel like it's been ages since it's been on! (Oh, wait, it has been ages.) At least now we have a start date and, hopefully, they'll be some more spooky new promos too!
11/12/2008