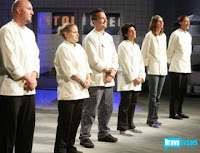 I have no love lost for Jill, who couldn't even properly defend herself or her dish at judging table, yet I have to say: Ariane should have gone home.

I'm speaking, of course, about last night's episode of Top Chef ("Show Your Craft"), which had the cheftestants preparing their own hot dogs as part of the Quickfire Challenge and then devising a New American lunch menu for Tom Colicchio's flagship restaurant Craft in New York. (FYI, the Los Angeles outpost is one of my favorite restaurants, full stop.)

While the chefs clearly brought the razzle dazzle last week and managed to impress Tom with their creativity and flair, this week was an entirely different story as the chefs' overall performance was really pretty shabby, if I'm being honest. Yes, they had a lot of pressure placed on them by having to work in Tom's kitchen at Craft and the expectations were high (not to mention that NYC chefs who failed to get on Top Chef aren't the kindest of critics), but most of the dishes were flawed in the conceptual stage rather than in the execution. And I was shocked and hugly disappointed by some of the decisions the chefs made... like Hosea using canned crab meat for his salad or Jill fixating on the ostrich egg and then wasting its potential by turning it into a gluey quiche. Disappointing, to say the least.

Yes, there were some stand-out dishes that towered above the others. Jamie's cold corn soup was a unanimous hit and she perfectly understood the New American brief: simple, modern, and elegant with clean flavor profiles and top-quality produce; I was pleased to see that she added her own signature twists--a julienne of mint leaves and some chili oil--that brought a freshness to this classic dish. Well done, Jamie.

And as much as Fabio drives me up the wall, he did turn out a fantastic dish of beef carpaccio with parmesan, roasted tomatoes, aged Balsamic vinegar, and "spherical olives." The dish itself was beautifully prepared and again used high-grade ingredients but he managed to impress (and surprise) the judges with his use of molecular gastronomy in creating those spherical olives. A nice touch that brought the dish into the 21st century and gave the judges some real talking points.

I wasn't all that impressed with Carla's rustic apple tart but it was easily the very best of the desserts category, which--as usual on Top Chef--was pretty damn lackluster. (Why is it that these incredible chefs don't learn a few desserts by memory before going into the competition?) While the crust was flaky and delicious, I did take exception (as did the judges) to her "deli-style" placement of a triangle of cheddar on the plate when that cheese should have been better incorporated into the dish. Why not use it in the crust itself? Still, marks for at least creating an appetizing and tasty dessert.

I knew Hosea was on the chopping block the second he decided to use that tinned crab meat instead of scrapping his dish for something else entirely. Yes, the dish sounded great with its vanilla-citrus sauce, crab salad, and mango but the overwhelming metallic taste of the crab (and its innate underseasoning) trumped everything else. A bad, bad decision in a competition and a restaurant that stands for high-quality, fresh ingredients. If there was no fresh Dungeness crab available, don't do the dish. The fact that Hosea thought he was called into judges' table because he had WON the challenge was shocking, as was the fact that he admitted this to the judges, after such a sub-par dish. Humility will get you much further in this competition, dude. Just look at Fabio's fumbling explanation for a dish that the judges actually DID love.

And then there were Jill and Ariane. In the two episodes that have aired to date, Ariane has found herself in the bottom two twice. That should tell the judges something right there. Adding to that fact, Ariane's saccarine dessert--a lemon meringue martini with a cherry surprise at the bottom--not only sounded ghastly but it actually caused Padma to spit it out into a napkin, possibly a Top Chef first. While Ariane admitted that the dessert was overly sweet, that's a bad reaction to ever get from a judge on the series and it must have been mouth-burningly sugary to get that sort of violent response from Padma.

As for Jill, her quiche was not only gluey and tasted poorly, but she (A) completely misunderstood the New American brief and offered up a boring, 1980s answer to that type of cuisine, (B) wanted to wow the judges with her use of an exotic ingredient (the ostrich egg) but failed to do so in any creative or original way (quirkiness for quirkiness' sake doesn't get you any points), and (C) couldn't articulate defend herself, her dish, or her reason for wanting to stay in the competition. Did nerves get the better or her? Possibly, but that didn't excuse her terrible performance in the Quickfire (she used a store-bought hot dog and created hot dog "sushi," which she thought would be original) or the lack of passion or vision in her dishes or her answers.

I was really hoping Ariane would go but after hearing Jill speak, I knew that she was a goner. You have to be able to defend yourself--sometimes tooth and nail--in front of the judges and Jill couldn't offer up an explanation about anything to save herself. And that is a real travesty when you look at the passion and drive that the other chefs have. Should Ariane--who burst into tears upon hearing the news--still be there? Hell, no. But I have no doubt that the timer will soon be buzzing for her to leave before long.

Next week on Top Chef ("Foo Fighters Thanksgiving"), the chefs have to impress Dave Grohl and the Foo Fighters as they join the band for a tour stop in Syracuse, N.Y. and battle the elements and each other.

Anonymous said…
The dishes this week were pretty dismal and I was glad that the contestants got a stern lecture from Tom.

I cannot understand why these chefs would not learn a decent dessert or two before the competition. It's not rocket science. And while I understand that dessert is not the main focus, it always comes up in challenges and the contestants always produce something mediocre or just horrible.

And I would have been happy to see both Jill and Ariane go. It's clear that Ariane does not have the skills needed for a Top Chef and Jill did not seem to understand that it doesn't matter how "unique" your food is if it doesn't taste good.
11/20/2008

rockauteur said…
Ariane needs to go! She sucks! I didn't like Jill anyway but Ariane deserved to go... at least three undeserving chefs got the boot..
11/20/2008

Anonymous said…
Even though Jill couldn't put two words together I would have booted Ariane just because her dishes have been awful. That thing she made last night sounded disgusting and I would have spit it out too. Who mixes meringue, cherries, cookies, and lemon together in a cocktail glass and calls it dessert? Why did she volunteer for dessert if she couldn't do anything good?
11/20/2008