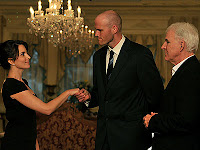 With some of my favorite series being canceled left and right (and others seemingly getting worse and worse), it's at least heartening to know that 30 Rock is still dependably great and consistently funny week to week.

This week's installment of 30 Rock ("Gavin Volure") was no exception and offered up a winning guest turn by Steve Martin--Tina Fey's co-star in this year's Baby Mama--as reclusive (or so it seemed) and eccentric millionaire Gavin Volure. Adding to the humor, of course, is the fact that "voleur" is French for "thief" so Liz and Jack really should have been on their toes a bit more going into their embezzlement/MTV Canada-fueled encounters with Gavin.

The opening scene at Volure's dinner party was priceless, especially as Jack and Liz were for once the most normal people in the room, given the outright creepiness of the other guests, including the scary old society dame and John McEnroe. Loved that Jack is actually the author of some historical fiction novels, including one that looks at what would have happened if Germany had won WWII.

So what worked for me this week? The ongoing gag with the Tracy Jordan Japanese Sex Doll as Tracy believed his kids were looking to murder him now that he's a huge, rich success story after seeing a report on the Menendez Brothers; Liz knowing the location of every good cupcake place in Manhattan; Gavin's odd eccentricities such as spending the day napping, looking at celebrity news on the Internet, and watching TV and the fact that it was all the things that Liz craved, including not having to have sex; Jack's realization that he has a "black thing" for men such as Taye Diggs, Denzel Washington, and Michael Jordan; Kenneth keeping his earnings--including Confederate money--in an old coffee can and looking away from the t-shirt containing the "off-color slogan" of California. (Ha!)

What else? Well, the little things like Pete's huge head not fitting into the helmet for the floor emergency marshal who will combat "fires, terrorist attacks, Cloverfield monsters"; Jack explaining the "weird turn" that Jet magazine, formerly about aviation ownership, took back in the day; Liz's Sunday Styles photo ("I only wore that because the fire alarm went off when I was getting a hair cut"); Gavin treating his jailer Carl as one might an indentured manservant; Gavin proving he went to Canada by offering Liz some Canadian cholesterol medication and a direct-to-DVD Paris Hilton movie; Liz telling Jack that she thought she was helping treat Gavin's agora- and germaphobia by letting him touch her boob during Top Chef. Classic.

But it was that ridiculous and utterly hilarious Sunstream commercial (which made absolutely no sense) that had me rolling on the floor with laughter. It was a cutaway gag that would have worked perfectly on Arrested Development and reminded me just why I love 30 Rock so much.

Is it absurd to think that a convicted racketeer (whatever that may be as Jack and Liz don't seem to know) could masquerade as an agoraphobic millionaire in Connecticut and get away with it as long as Gavin did? You bet, but in the heightened reality of 30 Rock, it's moments like these that make sense AND allow for some nifty guest casting like Steve Martin. I did hope that Martin would have stuck around for a bit just because I would have loved to seen Liz sample high society a little more and find someone just as idiosyncratic as herself. After all, he admits that he would be lying if he said he "never danced with a broom," and she admits that she often calls credit card companies to dispute charges so as not to feel so lonely during dinner. A match made in heaven? Or, as Liz might say, "What the what?"

Best line of the evening: "How can I loosen up? I’m in Connecticut, I haven’t eaten, and I’m stressed about an away toilet situation." - Liz

What did you think of last night's episode? Talk back here.

In two weeks on 30 Rock ("Reunion"), Liz is tormented by the idea of attending her high school reunion but Jack convinces her to go; Don Geiss (guest star Rip Torn) wakes up from his coma but surprises Jack with his declaration about who will be the new CEO; a shaken Jack tags along with Liz to her reunion.

Anonymous said…
I had such high expectations for this episode and I was not let down one bit. Steve Martin and Tina Fey are a match made in comedy heaven. I laughed more in the opening bit (when Liz was eating the potpourri/not chips) then I did in the entire episode of The Office. I'm already looking forward to watching the episode again! And the PSA with Tracy Jordan and his sex doll at the end was just icing on the cake.
11/21/2008

Danielle C.F. Maris said…
This was one of my favorite episodes yet. I needed a pick-me-up after learning that Pushing Daisies had been canceled and this did the trick. Steve Martin is brilliant and I hope that, somehow (jail break?), Gavin Volure will return!
11/21/2008

Anonymous said…
I didn't even pick up on the Volure/voleur reference. Good call, Jace! Another great ep from 30 Rock and I also hope that Steve Martin will turn up again!
11/24/2008

TVBlogster said…
Being an "Office" fanatic, which is becoming a chore since the show has given me heartached and a bad case of nerves each week, there is nothing like settling into an episode of "30 Rock" which is fun, consistently hilarious and stress/angst free. The episode with Martin was no exception. I bellyached on my blog that stunt casting is no necessary for Fey's baby, but I have to admit, using his comedic chops was welcomed. I can't even begin to mention how much I relate to Liz. Weekend of television, internet, food? Sign me up.
11/24/2008

Anonymous said…
For me, definitely the best episode of the season so far...