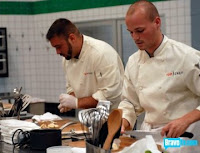 Despite watching the premiere of Top Chef: New York last week (and offering up my advance review of the episode yesterday morning), I couldn't help but tune in again last night to watch things heat up in the kitchen on my favorite culinary competition series.

But let's talk about the food. I'm hoping that others are with me in my decision to root for former dishwasher Eugene; despite having no formal training, this guy is a brilliant chef and shows innate ability and potential. Landing the unfamiliar assignment of Indian food, Eugene still managed to dazzle with a dish of Masala-rubbed lamb rack with basmati and macadamia nut tzatziki whereas his competitor Alex offered grilled lamb chops with spicy ragout and basmati rice. Padma praised Eugene's dish as "one of the most classic dishes that any South Indian household has which is curds and rice." Well done, Eugene.

It was hardly a surprise that Stefan, despite having immunity gained from the Quickfire Challenge, quickly trumped Ariane; his dish--an elegant pairing of lamb chops with lemony tabouli salad and cinnamon beef-onion skewers. Ariane's dish, a couscous and gremolata-crusted rack of lamb with farro risotto and dried dates with chickpeas, didn't quite hit the mark; the farro risotto was woefully undercooked and I tend to associate both farro AND risotto more with Italy than I do Middle Eastern cuisine. (Although, yes, farro--or emmer--was used in ancient times throughout Asia and Europe.) The fact that Ariane told Tom that she would look in a book if she needed to cook a Middle Eastern meal was inexcusable. I have a feeling that she won't be long for this competition.

Richard and Jamie had to tackle Greek cuisine and Richard offered up a lamb slider with orzo-feta pasta salad. Jamie deconstructed the classic Greek salad, offering up a charred eggplant puree and seared bass with a wild arugula salad with cucumbers, cherry tomatoes, feta, and a Kalamata and Greek honey vinaigrette. No surprise who won that round, especially as Richard's sliders were way too dry and overcooked. (Hint: lamb is always better when it's on the rare side than well-done.)

Radhika and Jill landed Jamaican. Jill prepared macadamia-crusted plantain fritters and Jerk-spiced scallops and three sauces. (My mouth literally watered when I saw her dish, which sounded absolutely divine and perfectly used the influence--and Rastafarian colors--of the cuisine she was assigned, even if the scallop was slightly overcooked.) Radhika was less successful, however; her dish--Jerk-rubbed halibut on three bean rice with a mango salad--and her dish suffered from a lack of textural distinction between the fish and the beans.

Fabio's Latin-inspired dish--a sous-vide pork chop with a mango and jalapeno demi-glace, served with a mushroom and avocado salad--seemed confused and cluttered and didn't quite capture the spirit of Latin cooking. Jeff, meanwhile, constructed a poorly plated dish of Cuban coffee-seared pork tenderloin and puree of smoked plantain with black beans, corn, and rice. A messy, messy dish but the flavors definitely surpassed that of Fabio's dish.

Then there was Carla and Hosea, who went to Russian neighborhood Brighton Beach; Hosea prepared a gorgeous smoked fish trio with caviar, creme fraiche, and apple chutney that beautifully managed to capture the Russian influence and looked gorgeous and sophisticated. (He also wisely asked the fishmonger for smoked filets.) Less so was Carla's dish of smoked trout and salmon cakes over potato latkes (why serve a fish cake on a potato cake?) and caviar, which looked greasy and unappetizing.

Leah and Melissa landed the plum gig of Little Italy. Leah cooked up a farro risotto (or "farotto") with seared red snapper and mushrooms, an elegantly constructed dish that screamed modern Italian cuisine. Unfortunately, Melissa offered a messier dish that wasn't nearly as refined or modern (it upset me that a chef of her age doesn't have a grasp on Italian cuisine as a whole) consisting of a seared rib eye steak, arugula salad, fried mushrooms, and tomato sauce. Plus, it was underseasoned. No contest there.

Lastly, there was Daniel's Chinatown-inspired poached chicken salad with bok choy, shitake mushrooms, and fried wontons and a honey-Sriracha foam and Patrick's seared salmon with bok choy and scallion with black rice noodles. Both of them really just depressed me as neither one was particularly inspired at all. Seriously, you guys land Chinatown and can't come up with anything more interesting or provocative than these two dishes. The judges are right, Daniel, Wolfgang Puck has been making that salad for over 20 years now and one only need to step into any Chinese restaurant anywhere in LA and ask for Chinese Chicken Salad to get one. (My favorite, I'll admit, is from Chin Chin.) As for Patrick, the dish was so textbook and lifeless that it was hardly a surprise that you lost this round; plus, I don't know why you would EVER work with an unfamiliar ingredient in a competition, especially this early in the game. Foolhardy, to say the least and not a surprise that, in the end, he was told to pack his knives and go.

But I am curious to know what you thought about last night's season opener. Were you just as captivated by this season's cast? Did you want to smack Stefan during his argument with Daniel over whether vinaigrette was in fact an emulsion? Did you want to tell Jeff to put down the hair styling products and focus on plating the food and watching the clock instead? And was last night's installment more exciting than the entire last season of Project Runway? Talk back here.

Next week on Top Chef ("Show Your Craft"), the cheftestants must prepare and serve lunch at judge Tom Colicchio's flagship restaurant Craft (one of my favorite restaurants) and are judged by New York City chefs who auditioned for the series and didn't make the cut. And Padma encounters some food she can't swallow. Ouch.

Anonymous said…
I've already been totally sucked in and I thought that, for the most part, the dishes in this episode were very impressive. I look forward to seeing what these chefs will do!
11/13/2008

Danielle C.F. Maris said…
I appreciate how Top Chef, unlike most reality shows, keeps contestants based on their skills and not their personal issues. For example, the first person eliminated had an interesting story (her husband being in Iraq). Most shows would have kept her around just for that reason but not so on Top Chef. She didn't have the skills necessary and was sent packing.

In fact, we don't ever really know that much about the personal lives of the Top Chef contestants and I find that really refreshing after seeing too many people cough up their entire life story in front of the cameras or use their personal issues as an excuse for their behavior (Kenley, cough, cough). On Top Chef it really is about the skills and I respect the show, and the contestants, more for that.
11/13/2008