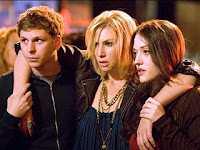 Happy Thanksgiving and welcome to your Thursday morning television briefing.

While there's not much television-related news today (this being a national holiday and all), I did want to just share a few tidbits that are floating out there.

Ari Graynor (Nick & Norah's Infinite Playlist) has been cast in a multiple-episode story arc on FOX's Fringe, where she will play the younger sister of Agent Olivia Dunham (Anna Torv) in at least three episodes. Graynor's first appearance is scheduled for early January and she will turn up unannounced in Boston at Olivia's flat with her young daughter in tow, supposedly looking for some place to crash after man troubles. Could it be that Little Sis has an ulterior motive? Hmmm. (Entertainment Weekly's Ausiello Files)

James Hibberd talks to The Mentalist creator Bruno Heller about the hit CBS freshman procedural drama. Among the topics under discussion: where the idea for The Mentalist came from, when to expect a resolution to the Red John storyline (hint: the series finale), and the danger in turning Jane into too much of a superhero. (Hollywood Reporter)

ABC is said to be focus group-testing that romance between Grey's Anatomy's Izzie and her dead boyfriend Denny. However, the good news, according to EW is that "Rhimes hasn’t given up on girl-on-girl love, as bisexual Callie is about to start canoodling with new intern Sadie (Melissa George). McSteamy (Eric Dane) may end up doing the dirty with little Grey, Lexie, played by Chyler Leigh (anything’s better than watching her pine over the oblivious George), and fan favorite Addison Montgomery (Kate Walsh) will show up for a special crossover episode with Private Practice in February. The bad news is that Jeffrey Dean Morgan is slated to appear at least through February." (Entertainment Weekly's Hollywood Insider)

Tyler Perry has settled his contract dispute with the WGA and writers on his TBS series House of Payne. (Variety)

Anonymous said…
I can totally see Ari Graynor as Olivia's sister (on Fringe). And I think it will be great to see one of Olivia's family members which will help us get to know her a little more.
11/27/2008