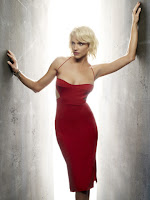 Welcome to your Monday morning television briefing. I had a fantastically relaxing weekend, filled with some holiday-related events and a lovely private screening of the new film Slumdog Millionaire in my own living room. Good times.

Battlestar Galactica fans, hold on your hats. BSG's slinky seductress Six, a.k.a. Tricia Helfer, has signed on to guest star in an upcoming episode of NBC's Chuck, where she will play Special Agent Alex Forrest, a sexy-yet-by-the-book agent who is assigned to guard the Intersect after General Beckman becomes concerned about Sarah's feelings for Chuck. Look for Casey to fall for Alex's charms... and perhaps Chuck himself. Helfer is slated to appear in the 18th episode of the season, scheduled for next spring.

Also appearing this season on Chuck: Jonathan Cake (Six Degrees), who has signed on for a multiple-episode story arc as a "Gerard Butler-esqe British MI6 agent by the name of Cole Barker" who quickly finds himself drawn to Sarah. (Who wouldn't be?) And look for Sports Illustrated cover girl Brooklyn Decker to turn up in Episode 215 as a possible Buy More recruit being interviewed by Jeff and Lester. (Entertainment Weekly's Ausiello Files)

John Simm (Life on Mars) has stated emphatically that he will NOT be taking over from David Tennant as the Doctor on Doctor Who. (Damn it.) "I'm The Master," Simm told The Times. "Simple as that. I don't want to be [the Doctor]. I might be the Master again... I'm not allowed to say." Simm was definitely one of my top contenders in my list of possible replacements for Tennant but I'm hoping at least that he'll turn up again as the Master. (Digital Spy)

NBC has announced that it will move international co-production Crusoe, which has been sinking (heh) in the ratings since it was launched, to television Siberia, namely Saturday evenings. Crusoe, which is being moved so that the Peacock can use its current Friday night timeslot for Lipstick Jungle, will move to Saturdays beginning December 5th. Lipstick Jungle has four remaining episodes that have been scheduled for December 5th and 12th and January 2nd and 9th. (Variety)

Jennifer Westfeldt (Kissing Jessica Stein) is joining the cast of ABC's Grey's Anatomy, where she will play a patient at Seattle Grace in a multiple-episode story arc. (Entertainment Weekly's Ausiello Files)

ABC is now considering pairing its acquired comedy Scrubs with freshman comedy Better Off Ted on Tuesdays in the 9 pm hour. Better Off Ted, which stars Jay Harrington and Portia De Rossi, could debut as early as January... or be held until February or March. (TV Week)

Following the federal mediator's abandonment of efforts to bring SAG and the AMPTP together, SAG has announced its intent to seek a strike authorization from its members. A 75% approval vote is necessary to authorize a work stoppage. "SAG is bizarrely asking its members to bail out the failed negotiating strategy with a strike vote - at a time of historic economic crisis," said the AMPTP in a statement. "The tone deafness of SAG is stunning." I can only hope that the two sides can resolve their contract differences without resorting to a walk-out which would only further damage the already weakened television and film industry. (Variety)

NBC.com will offer an extended "producer's cut" version of last week's episode of The Office beginning tomorrow. This online-exclusive will offer additional scenes and footage not seen in Thursday's telecast. (Hollywood Reporter)

Los Angeles Times' How I Made It profiles Universal Media Studios topper Katherine Pope, whose contract expires in June. Pope, who had a hand in developing such NBC series as Heroes and Friday Night Lights, said, "This isn't an easy job, but I absolutely love the work. And I'm not finished doing it." (Los Angeles Times)

In other NBC news, the Peacock is said to be developing a series with self-help guru Tony Robbins and has handed out a pilot presentation order for a reality series that is said to be a "transformational-style show in the same vein as NBC’s hit The Biggest Loser.” Producers are currently looking to cast contestants who have had their lives derailed by tragedy and can't recover or who are "paralyzed by fears or anger." (TV Week)

Californication's Pamela Adlon talks about her career as both a live-action actress and a voice actor (Adlon is the voice of Bobby and others on King of the Hill), her "husky" voice, and Lucky Louie. (New York Times)

Josh Cooke (Big Day) has been cast opposite Katee Sackhoff and Brian Dennehy in drama pilot Lost & Found; he'll play Max, a psychiatrist friend of Tessa's (Sackhoff) who had a crush on her when they were in school together. The pilot will be directed by Michael Engler (Privileged). Elsewhere, Jessica St. Clair (Worst Week) will star in ABC's midseason comedy series In the Motherhood, where she will play the younger sister of Cheryl Hines' character, who lets her children run wild. (Hollywood Reporter)

BBC has opted not to commission another series of archeological drama Bonekickers, which aired six episodes earlier this year and lost nearly half of its viewers by the end of its run. "Ashley Pharoah and Matthew Graham have decided to concentrate on new projects," said a BBC spokesperson. (C21)

Tyra Banks' talk show will move to the CW for a fifth season next fall after concluding its current fourth season through syndication. Moving The Tyra Banks Show to the netlet will allow for more "cohesive marketing spin across the net's affils as well as cross-promo with Top Model." (Variety)

Endemol has signed a two-year overall deal with unscripted producer R. Greg Johnson, a former MTV executive who developed The Osbournes and Newlyweds: Nick & Jessica. Under the deal, he will create and executive produce new unscripted series. (Hollywood Reporter)

A&E has ordered reality series Steven Seagal: Lawman, which will follow the former action star as a fully commissioned deputy in the Jefferson Parish County Sheriff's Office in New Orleans and as a musician and philanthropist. (Variety)

Old Darth said…
Agreed. Chuck has done an awesome job with their casting this season.
11/24/2008