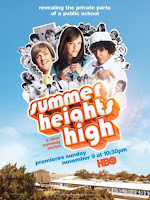 I don't often urge you to tune in to a particular series unless I feel it's in your best interests to do so, that your lives will be improved by watching a certain series or that it will open you up to new outlooks or perspectives. That time has rolled by again as HBO prepares to launch Australian comedy series Summer Heights High on Sunday evening.

Back in March, when HBO announced that they had acquired the mockumentary series--created, written by, and starring the incomparable Chris Lilley (We Could Be Heroes)--I jumped with joy as I had had the opportunity to watch the entire eight-episode run of Summer Heights High last year, shortly after it aired in Australia... and I urged each and every one of you to tune in when the series aired in the States.

Cut to today, two mere days before HBO bows the very first episode of Summer Heights High. Trust me when I say that your lives will never be the same after watching Lilley tackle three disparate characters: bitchy private school girl Ja'mie King, Pacific Islander/troublemaker Jonah Takalua, and fey drama teacher Greg Gregson (a.k.a. Mr.G), prone to putting on wow-factor shows like "IKEA: The Musical," "Tsunamarama," a story about the Tsunami set to the music of Bananarama, or "Bubble Wrap," in which a young Mr. G and other boys emerged from various forms of packing supplies.

While you don't have to know anything going into Summer Heights High, I do want to fill in a few blanks. For one, Summer Heights High is shot in a faux-documentary style a la The Office and follows the lives of the students and staff of public school Summer Heights High over the course of a year. It's a story that begins with the arrival of exchange student Ja'mie King, former nominee for Australian of the Year and a Svengali-like master manipulator who quickly plots to take over SSH's social scene.

While Lilley plays Ja'mie with all of the mean girl cunning and backhanded compliments of a spoilt rich girl, it's worth noting that the other teens (and many of the teachers) whom Ja'mie, Jonah, and Mr. G come in contact with are in fact actual real-life students and staff of the school where the series takes place. Some of the students are so hyper-real, that it's actually shocking to learn that they are not professional actors. (School principal Ms. Murray is in fact a real-life high school principal.)

The humor is along the lines of 30 Rock, Arrested Development, Flight of the Conchords, or the original UK version of The Office: that is to say, it's at times hysterically inappropriate (a rape joke in the premiere episode comes to mind) or painfully, squirm-inducing funny (Mr. G demonstrating the correct and incorrect way to touch a student with Down's Syndrome or telling a girl in a wheelchair that she's disappointed him for not getting on the floor during a dance lesson). But along with the humor, there's an equal amount of genuine emotion at work in Summer Heights High and while egocentric characters like Ja'mie and Mr. G don't learn from their mistakes or grow as human beings throughout the series (nor should they), it is absolutely amazing and heartbreaking to watch as Lilley shows the slow evolution and dawning realization going on behind Jonah's tough-guy facade.

Ultimately, Summer Heights High is a wickedly funny comedy series that will make you laugh until your sides hurt and also offer an unsettling view of life in an average high school, one rife with bullying, racism, homophobia, and eating disorders. In other words, it's a through the looking glass glimpse at the seedy underbelly of high school life, told with the sharp sting of a satirist and the wigs of a master impersonator.

The CineManiac said…
Thanks for the suggestion, I look forward to checking it out!
11/07/2008

Anonymous said…
I saw an ad for this the other day but wasn't sure what it was exactly. Thanks for the tip and I will definitely check it out on Sunday!
11/07/2008

Anonymous said…
This show is hysterical. The style and humor are very similar to Waiting for Guffman or Best in Show. (Mr. G could have been a drama student of Corky St. Clair's.) But the character or Jonah is truly original and his storyline is both hilarious and painful. I'm thrilled to see this fabulous show coming to HBO!
11/07/2008

qooza said…
It warms my heart when fine Aussie comedy is appreciated overseas. We have so little of it...
11/07/2008

eAi said…
Well, I saw the whole series via the internet and it's certainly good. It makes you cringe though! Some of it's too close to reality though...

Unknown said…
thanks for the tip. i will definitely be checking it out, especially considering your comparison to all my fav shows.