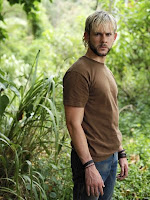 Welcome to your Tuesday morning television briefing. Just a few headlines to get through on this unprecedented and hopeful inauguration day.

Danny Glover (Brothers & Sisters) will guest star later this season on NBC comedy My Name is Earl, where he will play Crab Man's lost-lost father Thomas in a storyline that reveals why Darnell has been in hiding all of these years. (TV Guide)

Smallville showrunners Darren Swimmer and Todd Slavkin are said to be in talks with CW brass about overseeing the pilot remake of Melrose Place, following the departure of One Tree Hill executive producer Mark Schwahn from the project when CBS Paramount Network Television couldn't close a deal with Schwahn due to his commitment to Warner Bros., the studio behind One Tree Hill. Should Smallville be renewed for a ninth season, it's thought that Kelly Souders and Brian Peterson would take over showrunning duties on the series. (Entertainment Weekly's Ausiello Files)

FOX has ordered four comedy pilots and three drama pilots, in addition to the orders already handed out for comedy Boldly Going Nowhere (which is being redeveloped and reshot) and Kevin Falls drama Eva Adams. The new pilot pickups include: Walorsky, comedy about a former cop who now oversees a Buffalo shopping mall and is paired with a rookie partner from writer/executive producers Brian Gatewood and Alessandro Tanaka, EXPs Ravi Nandan and Scot Armstrong, and 20th Century Fox Television; Sons of Tucson, comedy from writer/executive producers Tommy Dewey and Greg Bratman and 20th Century Fox Television, about a con man hired by three brothers to pretend to be their father; Mike Binder's comedy Two Dollar Beer, about a Detroit couple and their friends and family; and comedy The Station, from writer/executive producer Kevin Napier and EXPs Ben Stiller, Stuart Cornfeld, and Jeremy Kramer, about a "covert CIA office in South America, where the team must install a new dictator." On the drama side, there's Human Target, from McG and Warner Bros. Television, based on a DC comic about a shady security expert who goes undercover to protect clients; medical drama Maggie Hill, from writer/executive producer Ian Biederman, EXPs Brian Grazer and David Nevins, 20th Century Fox TV, and Imagine, about a female cardiac surgeon battling schizophrenia; and an untitled reincarnation drama from writer/EXP David Hudgins about investigators who attempt to resolve clients' current problems by solving mysteries from their previous lives. (Variety, Hollywood Reporter)

Kurt Fuller (Desperate Housewives) has been cast in NBC legal dramedy pilot Legally Mad, opposite Charity Wakefield, Hugh Bonneville, and Kristin Chenoweth. Fuller will play Lou Peable, an attorney at the family-run law firm who is undergoing a mid-life crisis. He'll also appear in a three-episode story arc on CW's Supernatural, where he will play an exec with "supernatural authority." (Hollywood Reporter)

Sci Fi will bid good-bye to Battlestar Galactica on March 20th with a two-hour finale; prior to the event, the cabler will air a Battlestar Galactica Finale Special on March 16th at 10 pm, which will be repeated (along with the prior episode and the two-hour series finale) as a four-hour event on March 20th. The cabler will launch WCG Ultimate Gamer (formerly known as GameQuest) on March 10th, the fifth season of Ghost Hunters on March 11th, and Stargate: Ark of Truth on March 27th. (Futon Critic)

Assaf Cohen (Flightplan) has been cast in USA's 90-minute drama pilot Operating Instructions, where he will play "eager staff anesthesiologist Eli Funston, who alternately is frustrated by and in awe of Rachel (Emily Rose)." (Hollywood Reporter)

Anonymous said…
I'm very excited to see Dominic Monaghan on Chuck! I really miss him (or Charlie, anyway) on Lost! Do you think he'll play one of Drive Shaft's old hits?
1/20/2009