"Prison Break" to End and Other News from FOX's TCA Panel 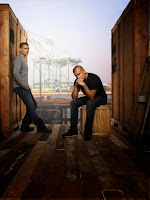 Yesterday's FOX panel at the Television Critics Association Winter Press Tour wasn't filled with too many surprises (did we really need to find out what Kiefer Sutherland's exercise regimen entails?) but there were a few revelations in store for attendees, most of which came from FOX entertainment president Kevin Reilly.

Chief among the revelations: Reilly claiming that the network would "let [Dollhouse] play out for 13 episodes" and that FOX would end Prison Break at the end of this season.

"Creatively, the show is just played out," said Reilly. "Creatively, everybody feels enough stories were told. We want it to finish strong and not just gimp out next season."

Currently, Prison Break has four additional episodes yet to air and these new installments are slated to return on April 17th. However, an undisclosed number of additional episodes are currently under discussion which could neatly tie up some dangling storylines and act as a series ender.

"We've got our remaining batch of four episodes," said Reilly, "and then there are a couple more we're contemplating."

Reilly discussed FOX's decision to slot Joss Whedon's Dollhouse on Friday nights "Joss Whedon does a certain kind of show," said Reilly. "He’s right in the zone again on that. It's the kind of show that we know has a core passionate audience. In some other scheduling scenarios, there could be enormous pressure on it but there could be an upside. We have a very compatible lead in with Sarah Connor."

Still, slotting the series elsewhere on the schedule would have put a lot of pressure on Whedon to perform at higher expectations which could have led FOX to "yank it from the schedule."

"We’re going to let the show play out for 13 episodes and hopefully it will catch on," continued Reilly. "If we can do some business there, that would be a great thing for the future."

Meanwhile, don't look for Fringe to fade off of the schedule. "I already know Fringe is a keeper," said Reilly. "The show's been a bear creatively because it's been very ambitious. They've really found the storytelling model now. What you're going to see in the second half in the year, if you follow the serialized story you will not be disappointed, yet the stories really do reset themselves each week. I would not expect it to take off after Idol, but I do think it will tick up another level," he says.

(We picked up review copies of next week's episode of Fringe, the first of 2009, so look for a review next week.)

Reilly hopes to keep Bones--which has moved around the schedule more than any other FOX series, I believe--sitting tight in the future. "I'd like to stop moving it around," said Reilly. "If it does what we think it's going to do on Thursdays, we will glue it there."

And FOX is committing itself to comedy development, despite the network's current "low pulse on live-action" comedy, although Reilly admitted that it's possible no new live-action comedies may appear on the schedule this fall. He said that the network doesn't want to just launch something blindly (as, perhaps it did with last fall's Do Not Disturb?)

Despite plans to pick up five drama pilots and five comedy pilots in the next few weeks, Reilly indicated that they may not launch another live-action comedy until they have a series "that can fire up time period" or they find a series that "can be compatible behind Idol" or can be launched in their Sunday night animated block and moved elsewhere.

Ultimately they want comedy series that are "bold and have a view."

Regarding FOX's surprising recent decision to renew lackluster comedy 'Til Death for another season, Reilly said simply: "We want to keep original programming on the air."

More Secret Millionaire could be on tap.

Scarily, FOX has an entirely unseen season of 22 episodes of reality series Moment of Truth on the shelf and could roll it out later this year. "Fortunately, we have other options," said Reilly. "And I don't mean that pejoratively to that show. We have it as a tool when we need it over the summer or to fill a time period. We have a season of them on the shelf... I think it will come back on the air at some point."

And then there was that winning bit about NBC, Reilly's former home, which he described as "the crazy ex-wife that I can't get away from." (FYI, the crowd erupted into laughter with that one.)

Of the Peacock's decision to fill its 10 pm hour with a Jay Leno talk show, Reilly said: "I was surprised to see that. I think it's the a smart strategic move in a very, very troubled place. Just looking at the facts, the network historically has struggled to establish scripted shows at 8 pm. You have to go back to Fresh Prince to find a self-starting scripted hit. It's been historically a challenge for NBC even at their height. So if 8 pm is a place they're going to struggle with scripted shows, if they don't program Friday, Saturday or Sunday for half the year with scripted show, on a historic level you look and say for the network that was the premiere brand for scripted television, 'that's a sad statement.' Whether they make it go at a business level, we'll see."

Danielle C.F. Maris said…
I appreciate Reilly's frank comments and think his comparison of NBC to a "crazy ex-wife" is spot on. I just hope Fox really commits to developing comedy series that are, as he said, "bold and have a view" because bringing back 'Til Death seems like a step in the wrong direction.
1/14/2009