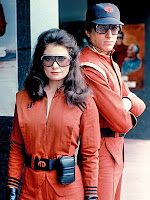 ABC has ordered a pilot for a modern day remake of seminal 1980s mini-series V, to be written/executive produced by Scott Peters (The 4400). Updated V, from Warner Bros. Television, will focus on a female Homeland Security agent. Elsewhere, NBC has removed the contingency from period comedy pilot Lost in the '80s, from Sony Pictures Television and Tantamount, which will be directed by P.J. Hogan (Shopaholic). (Hollywood Reporter)

Former Doctor Who co-star Freema Agyeman will reportedly reprise her role as Martha Jones in one of the four Doctor Who specials planned for 2009, despite some rumors of bad blood between her and outbound head writer/executive producer Russell T. Davies, said to originate when she accepted a role on ITV's Law & Order: London rather than star in a new season of Torchwood. “Freema’s on board," said an unnamd source. "It’s early days so it’s unclear what exactly Martha will be up to in the new show. Whatever happens it’s good news for Freema and shows that whatever friction there was between her and Who bosses has gone.” (The Sun)

It's looking increasingly likely that 24's Day Eight will be the last for Kiefer Sutherland. "Whether Season Eight is the end or not, I don't know," said Sutherland. "I love making the show, so I'm leaving my options open. And in all fairness, I think the audience will dictate that more than anybody." (Entertainment Weekly's Ausiello Files)

ABC has shifted a comedy block of Samantha Who? and new series In the Motherhood to Thursday nights at 8 pm, a timeslot traditionally held by Ugly Betty, which will go on hiatus until the two series wrap their runs. Additionally, Scrubs will be paired on Wednesdays with new comedy Better Off Ted in an 8 pm timeslot. But don't count Betty out just yet; ABC said that the struggling series would have been airing repeats during that time anyway. (Variety)

More info about Scott Bakula's multiple-episode story arc on Chuck from NBC: "In the storyline, Chuck made a promise to his sister, Ellie that he was going to find their dad in time for her wedding. But when he does find him, Chuck discovers that his dad is not necessarily a guy who wants to be found. He's living in a trailer, he's disheveled, he's paranoid and he's claiming constantly that Ted Roark (guest star Chevy Chase) -- who he used to work with -- stole all his ideas from him. In addition, Ted Roark has now become a super-successful software billionaire while Chuck's dad has become an eccentric, living in the shadows." (press release)

Jon Hamm is set to appear in three episodes of 30 Rock starting next week but you can get a sneak peek at footage of him as Dr. Drew Baird on the NBC comedy right now. (Chicago Tribune's The Watcher)

Among the teams racing for the million-dollar prize on the next season of CBS' The Amazing Race: screenwriter Mike White (best known for Freaks & Geeks, Pasadena, and Chuck & Buck, among many others) and his father, a gay-rights activist and former speechwriter for Pat Robertson and Billy Graham, and a 22-year-old deaf student and his mother. (Associated Press)

Producers of FOX's House are said to be in talks with Anne Dudek about reprising her role as Amber, Wilson's, er, dead girlfriend, later this season. Just don't look for her to return as a ghost like Grey's Anatomy's Denny. "If we could figure out a way to bring her back that is not a ghost sex plot," said executive producer Katie Jacobs, "we'd be thrilled to do it and have her back." (Entertainment Weekly's Ausiello Files)

Doug Allen has been fired as national executive director and chief negotiator for SAG in a move that also replaced the SAG negotiating committee, which is being viewed as a sign that the guild may soon sign a feature-primetime deal. "I'm sure it was a difficult decision to replace SAG's negotiators, but if the other entertainment unions can make a deal their members can live with, SAG can too," said Sally Field, who has audibly opposed Allen this past year, "and now I feel certain that will happen, quickly and productively." (Variety)

MTV has renewed The City and Daddy's Girls for second seasons as well as handed out a twenty-episode order for Teen Cribs and another batch of 28 episodes for series Made. (Variety)

TxGowan said…
V is actually at ABC. It was originally on NBC.

I had no idea there was friction with Freema Agyeman. I can see why she'd make the decision though since L&O:London is a full series and Torchwood wasn't going to be. Did anyone see her in the Survivors remake? Was it any good?
1/27/2009

I have a copy of Season One of BBC's Survivors but have yet to watch it, so can't attest to Freema's performance. Yet.
1/27/2009

Anonymous said…
I really would have loved to have seen Freema Agyeman become a full cast member on Torchwood but am happy she'll at least be returning for a Doctor Who special.
1/27/2009

It is so odd that Mike White will be on the Amazing Race and yet I'm tickled pink. He is one of my favorite writers and I loved him as an actor in Chuck & Buck and as Kim Kelly's weirdo brother in Freaks & Geeks. To see him completing Road Blocks and hanging out on the mat with Phil will be hilarious!
1/27/2009

The CineManiac said…
I'm kind of excited about V. I used to watch it with my mom and dad and brother each week when I was a little kid. (Like I was 3 when it aired, but I remember watching it with my parents!)
1/27/2009

Anonymous said…
No, not Martha Jones. I never really liked her. Only four Tennant/Who left. Why put Martha in their. Why can´t she be the one stranded in an alt. dimension?
1/28/2009