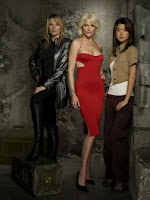 Welcome to your Monday morning television briefing. I'm still recovering from the past week and a half of Television Critics Association Winter Press Tour and Friday night's Battlestar Galactica cast & crew screening, which featured a live rendition by Bear and Brendan McCreary performing the BSG arrangement of "All Along the Watchtower," and a kick-ass afterparty thrown by director Michael Nankin, where much of the cast--including the Fifth Cylon--turned up afterward.

The Chicago Tribune's Maureen Ryan has a fantastic interview with Battlestar Galactica co-creator/executive producer Ronald D. Moore, writers Bradley Thompson and David Weddle, and director David Nankin about "Sometimes a Great Notion," the season premiere for the final run of BSG. Moore dishes about the reasoning behind the Fifth Cylon, Duala's fate, and shooting this episode during the writers strike. (Chicago Tribune's The Watcher)

The Sunday Mirror claims that Michelle Ryan (Bionic Woman, Merlin) has been picked by Doctor Who's Steven Moffat and the other executive producers as the new companion for the Eleventh Doctor, to be played by Matt Smith. According to their source Ryan has "been in secret talks with BBC bosses. They are likely to announce her as Doctor Who's new assistant very soon. She is perfect for the role. She is good looking and the right age to star alongside Matt. Everyone agrees they look great together and reckon fans will think they're the perfect team too." Other actresses linked to the role of late include Carey Mulligan (who played Sally Sparrow in Who's "Blink"), Lily Allen, and Kelly Brook. (N.B.: Ryan previously worked with Moffat on Jekyll, so there could be an ounce of truth to the story and after seeing her in said series, think she could be great on Who.) (Sunday Mirror)

Mad Men creator Matthew Weiner has signed a two-year deal with Lionsgate and AMC following months of negotiations that will keep him executive producing the Emmy and Golden Globe-winning AMC drama. Under the terms of the deal, Weiner will continue on as Mad Men's showrunner for the third season (to air this summer) and a potential fourth season and develop new series projects for the studio, as well as a feature film. "It's been a long road to try to make this deal," said Lionsgate TV president Kevin Beggs, "but between the support of AMC and the creative deal-making of (Lionsgate TV COO) Sandra Stern, we found a way to cobble together a package that was attractive to Matthew and made sense for us." (Variety, Hollywood Reporter)

The New York Times has a profile of Lost's co-producer/script coordinator Gregg Nation, who keeps track of the series' Byzantine plot developments, from the four-toed statue foot to the smoke monster, all while also charting the complicated character arcs and numerous subplots. "Keeping those details straight is likely to be increasingly important as the series speeds toward its climax, jumping both off and back onto the island and among the past, present and future. If Mr. Eko shows up alive or Jack’s chest hair reappears at an inappropriate time, for example, viewers will notice." (The New York Times)

In other Lost-related news, Entertainment Weekly's Doc Jensen has a video interview with Damon Lindelof and Carlton Cuse at the writers' office of Lost, as part of a planned Paley Center tribute to the series as they discuss fans' favorite episodes. (Entertainment Weekly)

And Tom Connolly (Veronica Mars) has been cast in an undisclosed recurring role on Season Five of Lost. (Variety)

Laura Prepon (October Road, That '70s Show) has signed on to appear in five episodes of CBS' How I Met Your Mother, where she'll play a former girlfriend of Ted's, whom he dated in high school and college and who was prone to cheating on him. (Entertainment Weekly's Ausiello Files)

Vanessa Marcil (Lipstick Jungle) has been cast in CBS' Without a Trace as a Manhattan social worker in a multiple-episode story arc. Marcil, whose character is intended to be a potential love interest for Eric Close's Martin, will first appear in the seventeenth episode, scheduled to air in March. (Entertainment Weekly's Ausiello Files)

Matt Letscher (Eli Stone) will join the cast of ABC's Brothers & Sisters in a multiple-episode story arc, where he will play a recent widower and a potential romantic interest for Kitty (Calista Flockhart). His first appearance on the series is slated to air in April. (Entertainment Weekly's Ausiello Files)

Danielle C.F. Maris said…
I am so relieved that Matthew Weiner finally signed his deal with Lionsgate. I was getting concerned that Mad Men would come to a swift end or, even worse, carry on without Weiner's vision and guidance.
1/20/2009

Anonymous said…
I think Michelle Ryan is a great choice for the next companion for the Doctor. Having seen her in Jekyll, I know she has the acting chops and charisma to pull it off. I would also be happy with the luminous Carey Mulligan who was wonderful as Sally Sparrow.
1/20/2009