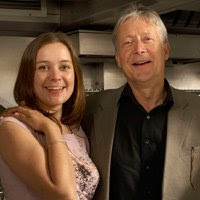 As always, it's early days on the series, so much of the action focused on the couples preparing their signature dishes for Raymond and his inspectors, Sarah Willingham and David Moore, and setting up their new restaurant spaces... just in time for Opening Night. Well, for nearly all of the teams, that is.

You read my advance review of the first three episodes of Last Restaurant Standing, but now that Season Two has launched, let's talk specifics.

First off, I'm really quite surprised and disappointed by the performance of mother-and-daughter team Annette and Kashelle. Kashelle seems like such a natural in the kitchen and we see her in pre-shot segments preparing some truly gorgeous Caribbean food, so why on earth would she opt to prepare a mango whiz, a dish that required no cooking whatsoever? In actuality, the entire dessert took quite literally three minutes to prepare, including the time it took to pour out the tinned mango pulp, mix in some cream, and squeeze in some lime. Did they really think that this was the most indicative of their style of cooking and the strength of their food? Did they play it far too safe?

I knew that they'd be getting cut from the competition as soon as Kashelle opened up that can of mango and I can't say that I'm disappointed, though I did have high hopes for them initially. There was no way that Raymond and the inspectors were going to let a display like that slide by and I knew right away that this couple was sailing off into the sunset before the restaurants even opened.

I'm totally baffled by Laura and Peter's Welsh-Chinese fusion concept (they seem to be equally confused) and I'm not sure why they didn't just name their restaurant after the building's dragon motif. After all, dragons figure prominently in both Welsh and Chinese mythology and there was a bloody dragon on the front door, so wouldn't that have been more indicative of what they're trying to pull off than The Welsh Wok? Just a thought.

I'm also not sure that former British Airways flight attendants Richard and Scott are long for this competition. Their restaurant, Sorbets & Seasons, is woefully mismanaged, Scott has no control over his kitchen (yet again, a sous chef rises to take the reins), and their concept is just odd. I had assumed that, in addition to serving seasonal food, they would treat the sorbets as they are traditionally used in fine dining: as an intermezzo palate refresher between courses. Not as they did by having a pea and mint sorbet shoved onto the menu... and then have no one order it. Sorbets should be light and refreshing, not heavy, creamy, or savory. Color me confused.

I was quite disgusted by watching James sweat into the food and work quite so hard to produce one dish for three people... when the challenge really involves cooking better than that to deliver fine dining for 80 covers. His arrogance is really quite off-putting as is his way of talking to best friend Alasdair, but I will say that I felt sorry for the boys not to get to open their restaurant due to a gas leak. If it had been any fault of theirs, I wouldn't have sympathized but as it was so out of their control, I did feel bad, given the amount of prep work James had done. Can he calm down and lead coolly rather than with an iron fist?

Likewise, I felt really bad for Harriet, who is teamed up with her father Mike, who is running front of house at their Oxford restaurant The Blue Goose. Mike had a good idea in asking diners to pre-book their dinner options but completely screwed up whatever advantage they may have had going into Opening Night by completely mismanaging the front of house, not working out a table plan for the restaurant, and then having the gall to demand payment for drinks from customers who were leaving after waiting several hours for food they had ordered two days earlier. Badly done, Mike.

I thought for sure that they would be sent home after Opening Night but I was glad to see that Raymond had a change of heart and opted to keep them around for another week before putting them into the Challenge. It was Harriet that I really felt for; nothing was said about her cooking or the food at the Blue Goose, because very few people actually got to eat it. I would hate to see them sent home because of Mike's inept front of house.

But I am curious what you all thought of the episode. Were you happy to see Harriet and Mike stick around for another week? Does hyper-arrogant James need to be knocked down a peg or two? Who are you routing for to win their own restaurant? And who do you think should be eliminated straightaway? Talk back here.

Next week on Last Restaurant Standing, the eight remaining couples have another chance to please Raymond and his inspectors and tweak elements that didn't quite work for Opening Night; James and Alasdair have a chance to open their eatery, The Gallery, after the gas leak; three couples are selected to go into Raymond's Challenge.

Anonymous said…
I was utterly gobsmacked by Annette and Kashelle's choice to serve Raymond mango whiz as their signature dish. Even though it was clear that Kashelle had talent as a cook, I'm glad they were sent home because the mango whiz showed some truly poor decision-making on their part and, during judging, they didn't even seem to realize what the problem was!
1/28/2009

Anonymous said…
Yeah, Kashelle and Annette definitely deserved to go home after not cooking anything. I don't get why they would do that when they had a chance to try to wow RB and dropped the ball completely. I like Lindsay and Tim. Richard & Scott are out of their minds with the stupid sorbet. Russell seems on the ball but Michele seems a little wacky to have control of running the front. Felt bad for Harriet. James needs to chill.
1/28/2009

Unknown said…
Yes, I'm glad Raymond and friends are back! I hope this season's winners fare better than Jeremy and Jane, who apparently mangled their chance last season and lost their restaurant after a few months ownership. Jess and Laura would have done much better!

The new judge, David Moore, seems very credible. Raymond Blanc himself doesn't miss a thing. Spring Lamb you tell me? I think not.
1/29/2009

scharabo said…
Just curious why you stopped commenting on the episodes.
3/19/2009

I'm a little confused but what you mean as I've commented on every single episode of Last Restaurant Standing since it started... Every Wednesday morning, there's a new post about the previous night's episode of LRS. Color me confused.
3/19/2009