If You Can't Stand the Heat, Get Out of the Restaurant (Business): An Advance Review of Season Two of "Last Restaurant Standing" 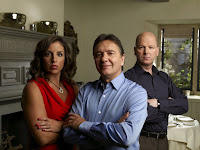 Longtime readers of this site know of my near-obsession with BBC America's addictive culinary competition series Last Restaurant Standing, which returns for a second season of kitchen catastrophes tonight.

As in Season One of Last Restaurant Standing (which airs in the UK as The Restaurant), famed chef and two-Michelin-starred restaurateur Raymond Blanc (of the fantastic Le Manoir aux Quat'Saisons) gives nine couples the dream of a lifetime: the opportunity to open their very own restaurant with him. But before they get to that point, they'll be culled one by one as they are given the keys to individual restaurants and tasked with running them, including everything from devising the menu and preparing food, to training staff and designing the decor.

Assisting Raymond in keeping tabs on the would-be restaurateurs are Raymond's diligent and attentive inspectors, including Season One's Sarah Willingham and newcomer David Moore, the owner of the two-Michelin-starred Pied à Terre in London. Sarah and David are the eyes and ears of Raymond in the field and there's little they don't notice, whether it's a lack of cutlery at a table service, the unhappiness of hungry diners, or chaos in the kitchen.

Think of it as Top Chef's Restaurant Wars challenge every week, albeit on a larger scale and with amateur cooks and novice restaurateurs rather than classically trained chefs. And just like on Top Chef, these competitors quickly feel the heat of the kitchen... and the sharp sting of regret. Every decision they make comes under Raymond's review and every other week, three of the underperforming restaurants will be placed in The Challenge, a last-ditch effort to see if they can sink or swim under Herculean odds... like running a highway rest stop restaurant.

This season's hopefuls are a motley bunch, comprising a mix of styles, attitudes, backgrounds, and skills. There's father-and-daughter team Mike and Harriet, who hope to take over Oxford with their concept for The Blue Goose, their eatery which promises modern remakes of classic dishes... but they quickly run into trouble with front-of-house, overseen by Mike, on their opening night. There's husband and wife team Peter, a Blue Chip company exec, and Laura who manage to confound both Raymond and the locals with their Welsh-Chinese fusion food; sparring best friends Alasdair and James who hope to perfect a fine dining concept but leave doubts in the judges' minds after delivering an awful signature dish; flight attendants Scott and Richard who have a bizarre concept involving seasonal food and sorbets... but fail to deliver on either front (just wait until Episode 3 to see it truly hit the fan).

Who else? Well, there's ex-naval officer Stephen and his wife Helen who offer rustic European fusion-style food in a family restaurant; newlyweds Chris and Caroline who promise a menu of British food made from high-quality ingredients... in a restaurant named after an English version of Raymond himself (Ray White's); dating couple Michele and Russell offer a friendly atmosphere at The Cheerful Soul but leave their customers anything but; and line cook Tom and his HR manager wife Lindsie devise a brasserie focusing on true provenance but don't quite seem to grasp the concept.

Having seen the first three episodes of Season Two (including tonight's two-hour season premiere), I'm once again hooked on Last Restaurant Standing's elegantly simple concept, its blend of winning casting and dramatic, high-pressure stakes, and its fantastically subtle narration (provided, this season, by Cranford's Barbara Flynn). The cast itself is a great mix of heroes, villians, misfits, and hopefuls and it's easy to become invested in their struggles and triumphs. On no other series could one feel bad for an arrogant team when it seems like they'll miss Opening Night because of a gas leak at the restaurant. And yet Last Restaurant Standing accomplishes just that rather effortlessly.

While the pressure is just as intense as it was the first time around, Season Two adds another layer of difficulty for the contestants by including new inspector David Moore, a man who would seemingly rather slap the wannabe restaurateurs than crack a smile. Winning him over is not going to be an easy feat.

Nor will it be to please Moore's teacher himself, Raymond, who remains just as precise and demanding as ever. However, it is nice to see Raymond demonstrate some tasks for the contestants this season, such as when he shows the couples how to elevate a boring bowl of gazpacho into something quite extraordinary and memorable. It's these little touches, the details and extras, that turn a restaurant into something magical and one can't help but feel that, regardless of the outcome, each of these couples is blessed to have been in the presence of a true alchemist.

Anonymous said…
I love Top Chef but Last Restaurant Standing definitely rivals it as my favorite foodie reality show. Like Top Chef, it's much more classy than most reality fare and has a great cast of characters who you really do get to know and cheer for. And Raymond is, of course, the perfect host. I'm just so thrilled that we get to see the second season!
1/27/2009

Anonymous said…
I love this show! I didn't know if there was going to be a second season and am so happy it's back. Thanks for the good news!
1/27/2009