Taunting Jughead: An Advance Look at Episode 503 of "Lost" 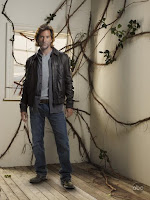 I wasn't going to post anything about the third episode of Lost's fifth season, but after watching it on Friday in a packed room filled with television journalists at the Television Critics Association Winter Press Tour, I figured I at least had to allude to it.

After all, it's not everyday that you get to watch a brand-new episode of Lost on the big screen, much less one as completely overflowing with neck-snapping plot twists as this one.

Damon Lindelof and Carlton Cuse asked us to respectfully not reveal spoilers about this episode of Lost, entitled "Jughead," especially as the season doesn't kick off until Wednesday evening. So while I won't be spelling anything out for you Lost junkies out there, I will be teasing some details about the shape of things to come.

Let's discuss what you can expect to find in "Jughead."

As much as I thoroughly enjoyed the first two episodes of this season, "Jughead," the third episode completely wiped the floor with me. I was alternately stunned, teary, shocked, and dismayed over the course of the forty-odd minutes that this episode ran. To say that this is a game-changing episode is a bit of an understatement, though not in the way that the flash-forwards or the rescue were. It's more the fact that this single installment answers so many of the underlying mini-mysteries that have kept us wondering for quite a while.

And none of them are spelled out for the audience, either. It's really only after viewing the episode that you'll begin to pull together the puzzle pieces splayed out here to assemble a view on the how's and why's. These mysteries are smaller but crucial elements to understanding some of the characters' motivations and go a long way to seeing where they are right now... and why.

Specifically, the episode deals not with the Oceanic Six (don't expect to see Jack, Kate, Ben, or the others for the duration) but with the characters left behind on the island and the power couple of Penny and Desmond, who makes some interesting discoveries on a life-and-death mission he's been tasked with performing. And we gain a surprising (and poignant) realization about a life-altering event in Desmond's own past.

What else can I hint at about this installment?
And, oh, I have a theory that I am just itching to explain to you all but can't until "Jughead" airs next week but suffice it say that it's eating me up inside not to be able to spill my theory, which deals with a new character on the series whom we'll call Blondie for now, though her name is given in the episode. As for what that theory is, you'll have to come back next week but I'm 99 percent certain that I've figured it out.

Ultimately, "Jughead" will answer some long-standing questions while--in true Lost fashion--pose a host of new ones but it's also an episode that testifies to the fact that Damon Lindelof and Carlton Cuse won't be pacing themselves to a crawl to the finale but actually sprinting at full blast. Trust me, you do not want to miss this episode.

Lost's fifth season launches Wednesday night at 8 pm ET/PT with a special three-hour event, including a one-hour retrospective and the two-hour premiere at 9 pm ET/PT.

I will leave one last thing for Lost fans. While you might not be able to wait till Wednesday, the wait will be well worth it. It's too bad that I now have to wait two weeks for another new episode.
1/19/2009

Anonymous said…
Once again you've managed to leave me going crazy for the next ep. Thanks for writing another review that hints rather than spoils the ep and for sharing your thoughts with us. I can't wait for Wed for Lost to begin and from the sound of this review the 3rd ep will be even better!
1/19/2009

Mazza said…
Sounds awesome. I'm jealous that you get to see these before everyone else but glad that you don't keep the clues to yourself either. I'm trying to figure out what your theory is based on this review and the last one but can't come up with anything. Can you give us a clue?
1/19/2009

Anonymous said…
I'm really excited that Penny and Desmond will be taking a front seat in episode three and will hopefully play a big role in the entire season. I love Desmond's storyline and look forward to learning more about Penny and seeing the two of them together at last!
1/19/2009

That sounds about right. In order of preference and just mind-blowing content: Episode Three, Episode One, and Episode Two. You can see why perhaps ABC chose to run the first two episodes back-to-back rather than space them out and get to the third installment as quickly as possible.
1/19/2009

Anonymous said…
Great to hear! One more day to go.

I'm jealous and sad for your early viewers. Jealous because you've seen the first three episodes. Sad because you can't share in our anticipation of seeing these episodes for the first time.
1/20/2009

Unknown said…
Ipsa scientia protestas est IS to declare herself in public is knowledge. So, I am thinking this is in reference to Charlotte and since you mentioned nosebleeds are in this episode, I guess I believe that in tonight's episode we get to know much more about who she is possibly from her own admission, where she came from and why is she. on the island. This could be one of the mini-mysteries you say are touched on tonight or even answered. I have not really placed much thought on who she for there are other issues that nag at me more enthusiastically. Of all the questions and logic defying realities that this show has given us, the only thins I know for sure is that "Lost" is one of the greatest, most original, fascinating, thought-provoking television shows in history. I would rank it in the Top 5 dramas of all time. There is no particular season that disappointed me. If viewers left during season 2 (considered the worst by many), then they weren't fans anyway or they were just too dumb to comprehend the philosophical dilemmas and questions that the show presented and could not just love the show for the fresh, 3-dimensional characterizations and plot points that were being created. Too bad for them because those who are intelligent enough to appreciate the show for all of what it contains have been highly rewarded by last season and so far, this one (those first 2 eps were brilliant). The second season was about slow development and story beats, some of which, have not even been dealt with yet but I trust and know they will be. There will no dangling chads when the show is over and done with. I am also fascinated by Hurley so far this season and his state of mind right now. Thank you ABC for green-lighting this strange, whimsical, wonderful, genius piece of art and putting on it's network for us to enjoy, think about and obsess over!
1/28/2009

Interesting theories. However, that's not quite the right translation of "Ipsa scientia potestas est." Will be interested to see what you think after tonight.
1/28/2009

Anonymous said…
I feel like there are so many themes in season 5 its going to be great! Has anyone heard of Al Trautwig - the Knicks/Rangers commentator..well he's also a HUGE LOST FAN and started a weekly video blog where he shares his LOST theories. I watched it and it's really interesting..He brings up some good points about time travel and how he thinks Miles is Dr. Marvin's son! watch it here: Lost
1/28/2009