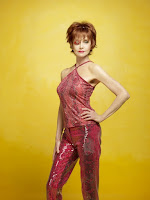 Welcome to your Monday morning television briefing. It's been a busy few days, between the ongoing Television Critics Association Winter Press Tour and the Golden Globes, so let's dive right into today's headlines.

Pushing Daisies might (sadly) be canceled but working relationship between creator Bryan Fuller and former co-star Swoosie Kurtz looks to continue. Kurtz has signed on to appear in at least one episode of Heroes, where she will play Millie, a society friend of Cristine Rose's Angela Petrelli. Kurtz's episode, written by Fuller, is slated to air in April and there is the potential that her character could be recurring next season. (Entertainment Weekly's Ausiello Files)

Buffy the Vampire Slayer's Amber Benson will guest star on ABC's Private Practice, where she will play a young woman who "in the aftermath of being brutally attacked seeks not just medical care ... but perhaps something more." Benson will appear in the series' 18th episode this season, currently scheduled for mid-March. (TV Guide)

Faye Dunaway is scrubbing in on Grey's Anatomy. Dunaway, who hasn't appeared on the small screen since a 2006 guest appearance on CSI, will appear in at least one episode of the ABC drama, where she will play a renowned doctor at Seattle Grace who "crosses paths with the Chief, Cristina, and Owen." (Entertainment Weekly's Ausiello Files)

BBC America could be airing Torchwood: Children of Earth, the series' truncated five-episode third season, as early as this summer and will be following the same air pattern as BBC One (five episodes over five nights), possibly even airing installments on the very same day they air in the UK. The digital cabler, however, wouldn't say just when the third season would appear--July or August is thought likely, as it is waiting for the Beeb to schedule first. (After Elton)

NBC has handed out a script order for comedy Barely Legal, based on the true story of an 18-year-old who successfully passed the notoriously difficult California bar to become a lawyer. Hilary Duff has been cast as the series' lead, under the terms of her talent deal with NBC and Universal Media Studios. Elisa Bell (Little Black Book) will write the script, which will be executive produced by Rob Morrow. (Hollywood Reporter)

Talk about back from the brink. In an unexpected twist, FOX has renewed comedy 'Til Death--which has been off the air since October--for a fourth season of 22 episodes. The network still has 15 unaired episodes from the Sony Pictures Television-produced series' current third season and the series is missing from FOX's current schedule, although the network could slate back-to-back originals of 'Til Death later this season. (Variety)

Shiri Appleby (Roswell), Kristoffer Polaha (Miss Guided), and Kerr Smith (My Bloody Valentine 3-D) have been cast in the CW's drama pilot Light Years, written by Liz Tigelarr and to be directed by Gary Fleder, about a 16-year-old girl who "tracks down her slacker biological father, bar owner Nick "Baze" Basile (Polaha), and her mother, morning radio host Cate Campbell (Appleby), who haven't spoken since high school when their one-night stand resulted in pregnancy." Smith, meanwhile, will play Cate's boyfriend, her co-host on the radio show. (Hollywood Reporter)

NBC will launch culinary competition series Chopping Block on March 4th. Series, which follows couples facing off in the opportunity to own their own restaurant, will air Wednesdays at 8 pm, where it replaces Knight Rider. Look for more info about Chopping Block, Kings, ER, and Police later this week when NBC discusses its midseason plans at the TCA Winter Press Tour. (Futon Critic)

HBO has quietly renewed animated comedy The Life and Times of Tim for a second season and will launch Will Ferrell and Adam McKay-executive produced comedy Eastbound and Down, starring Danny McBride, on February 15th. (Variety)

Fans of HBO's Flight of the Conchords will be able to download new songs from the series' second season from iTunes the morning after each episode airs. The band's next (currently untitled) album, featuring ten songs from the season, as well as five new tracks, will be released on April 14th. (Hollywood Reporter)

ABC is said to be mulling a return of Who Wants to Be a Millionaire this summer. The highly successful reality franchise could return this August as a multi-night event strung out over one or two weeks and would likely feature Regis Philbin as a host. (TV Week)

Don't look for Tony Shalhoub to continue playing Monk's Adrian Monk for much longer. "It's a great job, and I work with great people, and I really enjoy doing the character, but I think eight years is enough," said Shalhoub in an interview with the Associated Press. "I think we've kind of explored all the avenues we could possibly cover, and as much as I like the show and working on it, I really do want to think about moving onto whatever the next chapter might be." (Associated Press)

Diablo Cody, creator/executive producer of Showtime's new dark comedy United States of Tara, talks to the New York Times about making the series, which stars Toni Colette as a suburban mom with dissociative identity disorder. “I was nervous at the outset,” said Cody. “The pilot couldn’t be ‘sitcomy’ but, at the same time, it had to be funny. It was a big challenge to find the humor in everyday life and not poke fun at the disorder. And I wanted to be as sensitive as possible.” (New York Times)

Sci Fi has ordered a third season of reality series Destination Truth,which follows Josh Gates as he travels the world in search on unexplained mysteries. Nine episodes of the series, which will track Gates as he investigates bizarre phenomena in Alaska, Florida, Chernobyl, Turkey, the Bermuda Triangle, and the Himalayas, are slated to air this fall. (Hollywood Reporter)

Anonymous said…
I would be thrilled if we got episodes of Torchwood the same day (or at least soon after) they air in the UK. I hate having to wait months, or even years, to see great material from across the pond.
1/12/2009

joy said…
Agreed. Bring on the Torchwood, when it airs, please.

Do not, however, bring on that series with Shiri, Kerr and Kris old enough to have a teen. Eeeep. Though, it's very CW'esque, I suppose.

Oh, and when it airs, I may be the only one still watching PP, but I might tune out from Amber Benson. (Sorry, but count me in the minority of never liking Tara, and wanting Willow to be with Oz, and barring that, then with a witch of Willow's caliber. Tara was too doldrummy.)
1/12/2009

Anonymous said…
I *almost* believe that Kris Polaha is old enough to have a 16 year old. I don't believe for a second that Shiri is. Head scratching casting, for sure.
1/12/2009