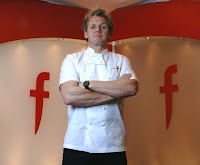 Those of us addicted to BBC America's culinary competition/chat/how-to/trend, well, everything series Gordon Ramsay's F Word would do well to set their TiVos BEFORE leaving for work today.

The third season of the culinary program, which airs on Channel 4 in the UK, launches this afternoon in a 3 pm ET/PT timeslot, rather than in the early Sunday evening slot the series previously occupied. While the scheduling reflects part of an overall daytime programming strategy for the channel, it leaves those of us who loved to wrap up our weekends with Ramsay out in the cold.

But do yourself a favor and set your TiVo to record this fantastic and engaging program. I'm absolutely chuffed to have F Word back on BBC America, regardless of the timeslot. I had the opportunity earlier this week to watch the first few episodes of the third season and have to say that Ramsay is in fine form.

In the first episode alone, Ramsay tasks a group of former Eton students to cook in the F Word kitchen, proves to a group of night shift nurses that cooking a fresh meal from scratch takes as much time as buying junk food from the local garage, goes ice diving to capture some live giant king crab (which can grow to up to six feet across), and makes out with comedian Dawn French, while Janice Street-Porter proves that Prince Charles' organic luxury food line Duchy's Originals is just as bad for you as McDonald's.

Even if you don't cook, it's impossible not to get caught up in the excitement (and stress) that Ramsay brings to the (dining) table and F Word is the perfect vehicle for Ramsay to channel his passion for food and conversation. Not to mention a stray f-word or two (thousand).

Anonymous said…
I'm happy that this is back as it's much, much more interesting and entertaining than Hell's Kitchen. But I am sad to see that BBC America is sticking it on in the afternoon. Kind of seems like a waste. Thank goodness for TiVo!
1/14/2009