Channel Surfing: "Gossip Girl" Spinoff Back to the 1980s, Chevy Chase to Torment "Chuck," Idris Elba Heads to "The Office," and More 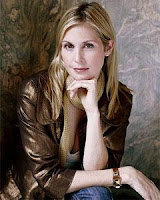 Looks like Ashes to Ashes isn't the only series heading back to the 1980s (well, except for Mitch Hurwitz's Lost in the '80s, that is): Josh Schwartz and Stephanie Savage have announced that the untitled spinoff of CW's Gossip Girl will focus on a teenage Lily Rhodes van der Woodsen Bass (played in the original by Kelly Rutherford) as a wild child in 1980s Los Angeles who moves in with her sister in San Fernando Valley after a falling out with her parents and must adjust to life at a Valley public school and a nightlife on the Sunset Strip in Hollywood. Spinoff will be produced as a backdoor pilot that will air May 11th as part of Gossip Girl's current season. (Variety)

Chevy Chase has been cast in a three-episode story arc on NBC's Chuck, where he will play Ted Roark, the billionaire technology mogul and owner of Roark Instruments, a company that Chuck Bartowski has always dreamed of working for. But Roark is accused of stealing Chuck's father's ideas and the company may not be as squeaky clean as it originally seems. (press release, Hollywood Reporter)

Holy Stringer Bell! British actor Idris Elba (The Wire) has been cast in six episodes of NBC's The Office, where he will play an uptight executive at Dunder Mifflin's corporate office who creates, shall we say, some major problems for Michael Scott. (press release, Variety)

Aubrey Plaza of the Upright Citizens Brigade has joined the cast of the untitled Amy Poehler/Greg Daniels/Mike Schur comedy pilot, which is to be set in the office of Amy (Poehler,) the deputy chairman of the parks and recreations department in Pawnee, Indiana. Plaza will co-star as April, an intern who shadows Amy. (Hollywood Reporter)

Kings is moving to Sundays at 8 pm, as a lead-in to Celebrity Apprentice. Could it be that NBC machinery didn't think the allegorical series had enough staying power to warrant a 10 pm weeknight time slot? Meanwhile, look for John Wells' new cop drama Southland (formerly known as Police and even more formerly known as LAPD) to take over the Thursdays at 10 pm timeslot once ER wraps up its run. (The Peacock recently ordered three additional episodes of ER.) (Hollywood Reporter)

Mark Cherry and the cast discuss the 100th episode of ABC's Desperate Housewives, slated to air on Sunday, which will feature flashbacks--revealing just why each woman turned out the the way they did--that are linked by appearances by handyman Eli Scruggs (Beau Bridges). (USA Today)

CBS has officially swung the axe: Swingtown is no more. CBS president Nina Tassler confirmed the cancellation speaking at yesterday's CBS panel at the Television Critics Association Winter Press Tour. "We're not going back to Swingtown," said Tassler. "At the end of the day the show was well executed, it was well received, the performances were great, the writing was great. It was a risk, we took it, and we're proud of it." Meanwhile, look for CBS to order an additional episode of The Mentalist and for the untitled NCIS spin-off cast to appear in an upcoming episode of NCIS. (Entertainment Weekly's Ausiello Files)

Diablo Cody will play herself in an upcoming episode of the CW's 90210, the series' nineteenth episode, which will also feature the first appearance of Tori Spelling's Donna Martin. "Donna Martin is still in the fashion business, and it may be that she may be called upon by Diablo Cody to create something for some event," said executive producer Rebecca Rand Kirschner. "That may be the beginning of their friendship.” (iF Magazine)

CBS is developing an untitled variety/sketch comedy pilot with musician John Mayer, which it plans to air later this year. If successfully, the pilot could spawn a series of specials. (Los Angeles Times' Show Tracker)

Universal Media Studios has signed a two-year, first-look deal with Don Cheadle's Crescendo Prods., under which Crescendo will develop series projects for the studio. Company is run by Cheadle along with producing partners Kay Liberman and Lenore Zerman. (Hollywood Reporter)

Anonymous said…
I think it's a smart move on NBC's part to put Kings on Sundays at 8pm. No serious competition at that hour.
1/15/2009

Anonymous said…
Don't forget Robert Picardo has also been cast for a multi-episode too.
1/15/2009

Any thoughts on CHUCK's likelihood of being renewed? The NBC brass sent some mixed signals recently; I assume they were just being prudent and hedging their bets.
1/17/2009