An Hour of Comedy Laughs (For a Change) 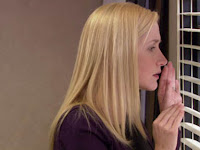 Every now and then you do get a perfect hour of comedy on Thursday night.

I haven't exactly been shy about my feelings about the post-Amy Ryan season of The Office so far this year, so I am always pleasantly surprised when an episode comes along that manages to make me remember why I once loved this series.

That said, I'd be happy if co-executive producer Jennifer Celotta would write every episode of the NBC comedy; I can always tell when an episode is written by Celotta: the characters seem more grounded, more realistic, and the pacing is swift and deliberate. Last night's episode of The Office ("Duel") featured the wrap up of the season-long storyline involving the love triangle between Dwight, Angela, and Andy and had Michael heading to New York to take a meeting with David Wallace, leaving Jim in charge of the office.

Perhaps proving that he is one of the most oblivious characters on television today, Andy still doesn't know that Angela has been sleeping with Dwight seventeen days after everyone in the office learned about Dwight and Angela's tryst. When Michael finally does tell him (following the most painfully drawn-out confession scene ever), Andy doesn't freak out and punch holes in the walls (as I thought maybe he would) but quietly asks Angela to talk in the conference room. Character growth, perhaps?

Meanwhile, I was completely surprised when Andy attempted to run Dwight over in the parking lot (loved the fact that he set him by leaving a "From the desk of Andy Bernard" note for Dwight to find) and loved the little moments: Dwight throwing out the bobblehead after learning that Angela had lied to him about sleeping with Andy, Andy sadly calling to cancel the wedding cake. (I also laughed my butt off when Kelly said simply of the duel, "I guess people have fewer choices as they get older.")

It's the smaller moments that serve the series' original purpose: to find humor in the most mundane of office-based situations. Is a weapons-driven duel between romantic rivals in the office parking lot realistic? Hell no. But the heightened reality of the situation is alleviated by the emotional truths on display here. Seeing Angela's face as she slowly realizes that she's lost both Dwight and Andy was absolutely heartbreaking.

A half-hour later, 30 Rock ("Flu Shot") once again proved why it's the very best comedy on television with an absurd storyline featuring flu shots, zombies, Liz's ideal vacation on St. Bartleby (which just happened to include an island lover, a sandwich turtle, and the French fashion of wearing dark socks with sandals on the beach), and Dr. Spaceman. Bliss, really.

I think "Mr. Templeton" might just be my favorite new song and I loved the montage of Jack and Elisa taking her nursing charge on their dates around town... and Mr. Templeton's explanations to his son about the strange goings-on of late, including "a giraffe with a man's legs" and a man who "was in prison, but now he owns a railroad!" (Ahem, Monopoly.) I'm really enjoying Salma Hayek on the series and, while I know that Elisa won't be sticking around for too long, I think she's a positive influence on Jack. Now if only we'd get a scene between Hayek's Elisa and Elaine Stritch's Colleen, I'd be set. That's one showdown I'm itching to see.

The sickies/zombie aside was absolutely hilarious and I love that it ended with Liz smashing a picture frame over Pete's head... and then being forced to perform a dance for Dr. Spaceman in order to get that flu shot. (For those of you who watch Gavin & Stacey, this dance topped Pamela's robot with Smithy as my favorite television dance move in recent memory.)

What else did I love? The ongoing discussions about whether it was okay to refer to Elisa as a "Puerto Rican"; Liz telling a feverish Kenneth that he's dreaming, they're speaking in French, and she's his mother; Dr. Spaceman making Jack drop his pants to give him a flu shot in his arm and later confessing to Liz that he's cheating on his wife; Jack getting freaked out by what appeared to be a beak in Mr. Templeton's foot; Cerie texting "UR V8K8SH1 iz baqon" to Liz; the general non-sequiturs from Dr. Spaceman ("When is modern science going to find a cure for a woman’s mouth?"); Tracy telling Liz that she looks like Tootsie; Liz admitting that she saw the trailer for Michael Moore's Sicko when she went to see Alvin and the Chipmunks; Liz telling Jenna to skip the shopping montage; the meat plate; Liz asking Elisa at her old job at Dunkin Donuts what time they throw out the old doughnuts. (I can go on and on.)

Best line of the evening: "It’s called a tankort, Cerie. You might have seen it in Us Weekly, worn by Dame Judi Dench...’s mother." - Liz

Next week on 30 Rock ("Retreat to Move Forward"), Jack asks Liz to accompany him to the corporate retreat; Jenna turns to Frank for help when she decides to use Method acting to prepare for her role as Janis Joplin; Kenneth tries to convince Tracy that his diabetes is affected by his diet. And on The Office ("Prince Family Paper"), Michael and Dwight decide to go undercover in order to gather information about a competitor; the other employees hold a debate to decide whether a certain actress is hot.

Unknown said…
I even sympathized (a little) with Dwight as he learned Angela "cheated" on him, too.

But, more importantly, when did The Office become a drama? I'd like to get back to the funny and not so much pathos.
1/16/2009

Anonymous said…
skst - I actually thought that last night's episode of The Office was much, much funnier than it has been in a long time. Sure, there were some dramatic beats but those have always existed in the best Office eps. and in the brilliant original series. Last night's ep had the perfect balance of intelligent humor, physical comedy, and heart (and not the sickly sweet Jim + Pam variety).
1/16/2009

Danielle C.F. Maris said…
Liz's awkward "dance" for Dr. Spaceman even rivaled Elaine's terrifying moves on Seinfeld. Genius! I also loved Tracy and Jenna's conversation with Kenneth about getting soup for the crew (Kenneth may as well have been speaking French) and that they forgot and went shopping instead. And that Tracy commended Jenna for not becoming sexually attracted to him during their outing. I could go on and on...
1/16/2009

Anonymous said…
I really love how 30 Rock has created this hilarious dynamic between Jenna and Tracy. I remember that when the show started, they were basically rivals, but it is much funnier to see them as silly partners-in-crime.

Unknown said…
@Bella Spruce: I appreciate what you're saying. In my opinion though, the drama in this episode was more than just a "dramatic beat." Cheating on your spouse, having the whole office know, and then being outted is more like L.A. Law drama. :-)