All This Has Happened Before: Universal Developing "Battlestar Galactica" Feature with Glen A. Larson 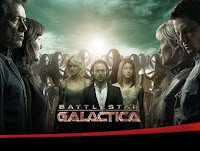 I am really, really disheartened by the recent news that Universal is developing a feature film version of Battlestar Galactica.

What's that you say? Shouldn't I be chuffed that Battlestar Galactica is heading to the big screen? Well, I would be if the version of BSG that was being developed as a feature was the current Sci Fi drama (which wraps its final season next month), executive produced by Ronald D. Moore and David Eick, rather than the original, less dark 1970s version created by Glen A. Larson (Magnum, P.I.). (You know, the one in which Starbuck was a, well, man.)

And yet that's just what Universal is doing. According to the Hollywood Reporter, Universal has "quietly entered into negotiations with Glen A. Larson to write and produce a big-screen version of the property he created."

The original Battlestar Galactica series shares a similar premise with the current series: the human race, existing in a settlement of Twelve Colonies, is all but wiped out by an attack from robotic Cylons and embark on a quest to find a new home on Earth.

Of course, Moore and Eick updated this concept and gave it the feel of post-9/11 zeitgeist. Their Battlestar Galactica was a much darker and morally complex entity than the original inspiration and they layered the tale of human survival through the elaborate use of extended metaphors for the war in Iraq, Guantanamo, the use of torture, sleeper agents, religious extremism, free will, and the fear of the Other. They also introduced the notion of the humanoid Cylon models ("skinjobs") who looked like humans (and had infiltrated the human governmental structure) but were cut from the same robotic cloth as their Centurion brethren.

This feature film version of Battlestar Galactica would have zero influence from the award- winning Sci Fi series overseen by Moore and Eick: "The movie effort would have no connection to the series and would relaunch the story in a new medium," writes the Hollywood Reporter's Borys Kit. "However, staples such as the characters Adama, Starbuck, and Baltar will remain."

Which leads me to question: why?

With Battlestar Galactica coming to an end in March, why would Universal seek to relaunch the franchise as a feature film but with different actors replacing Edward James Olmos, Katee Sackhoff, and James Callis... and a very different approach to the underlying material that has brought in a new legion of fans to the BSG mythos?

I understand that many fans of the original 1970s series were upset by some of the changes that Eick and Moore made, such as transforming Starbuck into a female character played by Sackhoff and making the franchise a very different beast, tonally, than it was originally. I wasn't a fan of the original series but I found Moore and Eick's reinvention of the franchise to be compelling, engaging, and wholly modern.

But to seemingly reboot Battlestar Galactica with Larson writing a new take on his original 1978 series seems to undo all of the successes of the current BSG series, which held up a dark mirror to our own society. My worry is that such a move will only dilute the Battlestar Galactica brand itself by offering up a throwback to a series that was a distinct indicator of its own time, just as Moore and Eick's Battlestar is a product of the post-9/11 era.

So where does that leave us? Moore and Eick's Battlestar Galactica is wrapping up next month and Sci Fi is readying another direct-to-DVD/telepic movie event based on the franchise entitled "The Plan," written by Jane Espenson and directed by Edward James Olmos; it's going to be set in the past so don't look for "The Plan" to reveal any further developments not covered in the series finale.

Is it that Universal wishes to play in the Battlestar sandbox but doesn't want to disturb the ending that Moore and Eick have established for the series? Or that they want to keep the franchise alive, even if it means offering up a take on the series that's a throwback to an earlier era?

At the end of the day, however, which version will fans spark to? Will they be willing to shell out money to see a film that features actors other than the ones they've grown accustomed to seeing in these roles? That's the real question, as audiences, even those obsessed with Cylons and Viper pilots, vote with their wallets.

What do you think of the news? Would you be interested in seeing a feature film based on Battlestar Galactica written by Glen A. Larson? Or does this news make you as unhappy as Laura Roslin facing down mutineers aboard Galactica? Discuss.

Asta said…
I was six when the original BSG debuted and, as a six year old, I enjoyed it. Especially hot on the heals of 'Star Wars'. When I caught one of the episodes of the original series recently, I cringed. That's not to say a believe a feature film wouldn't be better than the original series, but as good as the current Ron Moore incarnation? Frak No!

I was disheartened to hear the news that Universal was trying to relaunch the property yet again (and who reimagines a property before the last episode of the current reimagining has yet to air?), but not surprised. I know Larson owns the theatrical rights to the franchise, but the man hasn't been a force in the industry since the 80's and the only thing he seems to have produced in this decade is the abysmal 'Knight Rider' relaunch...which NBC/Universal quickly cancelled. My only hope is the script is as awful as I believe it will be and it goes no further. But if there is a BSG film without Jamie Bamber, Katee Sackhoff, James Callis, Mary McDonnell, and the rest I will not be seeing it.
2/23/2009

Danielle C.F. Maris said…
Why indeed? This makes no sense to me from a creative or business standpoint. Ronald Moore has done such a brilliant job breathing new life into this story...why would you then go backwards? Hopefully, it will never make it to the big screen.
2/23/2009

RenatoP said…
Definitely not a good idea. The only remote chance to get my interest in this project is if they're planning to have tons of space battles. That's because, in terms of drama and storyline, RDM's version said it all.
And please, keep at least the current BSG design. It's so much more a battlestar than the old design.
2/23/2009

CaraBee said…
I just don't understand this move by Universal. I will not see a Larson version movie.
2/24/2009

Unknown said…
It doesn't bother me anymore than any of the other dreck in theaters. RenatoP's got the idea. It'll be a huge action/adventure effort with special effects and explosions and lots of robots killing humans and someone destroying the robot queen at the end. It'll either go straight to DVD or spend about two weeks in theaters.
2/24/2009

Anonymous said…
I would like to see what GL does with this property on the big screen. People forget the limitations placed upon TV in the 70's. This was before cable, only TV was the big 3 networks..

I've always liked the basic Battlestar story (and I was an adult when it originally aired) and would like to see what GL would do unfettered by the restrictions of TV in that era.
3/07/2009