Channel Surfing: Kristin Bell to "Party Down" with Rob Thomas, Lindsay Duncan to Travel with the Doctor, "Project Runway" Wraps Season, and More 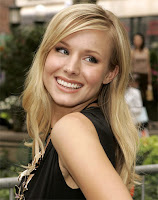 Welcome to your Thursday morning television briefing. Just a few quick headlines to get through today on this rather quiet programming-news-related morning.

Looking for one more reason to turn into Starz's upcoming comedy series Party Down, from co-creator Rob Thomas (Veronica Mars)? Turns out that Veronica herself--Kristin Bell--will be appearing on the series, according to Kristin Dos Santos. "I'm about to guest star on Rob Thomas' new show, called Party Down," Bell told Dos Santos. "It's on Starz...a lot of old Veronica Mars people are on it and some really cool comedians like Adam Scott." Starz has confirmed the casting coup saying, "Kristen Bell will be appearing in our new original comedy series, Party Down, premiering on Friday, March 20." Bell's episode, the season finale, is slated to air May 22nd and it's thought that Bell will play Veronica Moon, a rival caterer. (E! Online's Watch with Kristin)

Rome's Lindsay Duncan will guest star in this year's second Doctor Who special, where she will play a new companion for the Doctor (David Tennant) named Adelaide, described as one of the most strong-willed and intelligent companion the Doctor has had to date. The as-yet-untitled special will be filmed this spring and will later later this year on BBC One. (BBC News)

Project Runway will tape its season finale tomorrow at New York's Fashion Week... but it's still anybody's guess whether viewers will see the series' sixth season, currently the subject of a lawsuit between Bravo parent company NBC Universal and producer The Weinstein Company. NBC Universal successfully lobbied for an injunction which has prevented new network Lifetime from airing the series. "It's an absolutely fantastic season," said Tim Gunn. "There are opportunities located [in L.A.] that we don't have in New York. Here we have the Hudson River, there they have the Pacific Ocean... And nowhere has the red-carpet opportunities that L.A. has. I can't wait for you to see the show and see what we have." (Washington Post)

NBC's sci-fi pilot Day One, from Heroes writer/producer Jesse Alexander, is being rewritten as a two-hour pilot, according to Alexander, who is currently involved in casting sessions for the project. (via twitter)

Comedy Central has ordered seven half-hour episodes of sketch comedy series Michael and Michael Have Issues from creator/stars Michael Ian Black and Michael Showalter, which will offer a mix of comic sketches starring the duo and a "behind-the-scenes cinema verite drama." Black and Showalter will executive produce with Jim Biederman and Lou Wallach. The cabler plans to launch the series in July. (Variety)

The Paley Center for Media has announced its lineup for PaleyFest09 and will host panels for such series as 90210, Battlestar Galactica and Caprica, The Big Bang Theory, Big Love, Desperate Housewives, Dollhouse, Dr. Horrible’s Sing-Along Blog, Fringe, The Hills, It’s Always Sunny in Philadelphia, The Mentalist, Swingtown, and True Blood. (Televisionary)

Producers of NBC's reality competition series The Biggest Loser have decided to return to a single-contestant format this fall and will cast contestants from cities that top a recent "Fattest Cities in America" list. The new season will explore just why these cities' populations are battling obesity in such large numbers and will empower competitors to return home and improve their cities. (Hollywood Reporter)

SAG and the AMPTP met again yesterday in renewed talks that went late into the night. The two sides are scheduled to meet again today at 1 pm. (Hollywood Reporter)

Anonymous said…
RE: Lindsay Duncan - does that mean that Michelle Ryan won't stick around to become the Doctor's official companion then?
2/19/2009