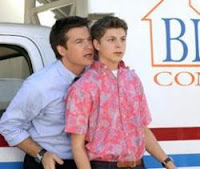 Now the story of a wealthy family who lost everything and the one actor who had no choice but to keep them all together. It's Arrested Development.

Yep, Michael Cera has finally signed on to the big screen version of Arrested Development, according to E! Online's Watch with Kristin, and will reprise his role as George Michael Bluth. (Not to be confused with the singer-songwriter.)

E! Online is reporting that cast holdout Cera will join Jason Bateman, Portia de Rossi, Will Arnett, Tony Hale, Jessica Walter, Jeffrey Tambor, and David Cross in the feature version of Arrested Development, which is reportedly going to be written by series creator Mitch Hurwitz and directed by Ron Howard.

Looking for details about a potential storyline for the Arrested film? You're sadly out of luck. Hurwitz, Howard, and the cast are said to be extremely tight-lipped about any plot points for the feature film, which will be produced by Fox Searchlight and may be filmed as early as this year.

What do you think of the news? Are you thrilled that Cera signed on? And are you ecstatic about the news that the Bluths will reunite for a feature film? Discuss.

Danielle C.F. Maris said…
I AM thrilled that Cera has signed on as it wouldn't be a proper Bluth reunion without him. As for the film storyline, I'm not too worried because this cast is so funny and fantastic that I would be entertained watching them read the phone book.
2/24/2009

Anonymous said…
"Now the story of a wealthy family who lost everything and the one actor who had no choice but to keep them all together. It's Arrested Development."

Anonymous said…
It's about time Cera woke up and realized that this movie will be pure gold. We have a very vibrant "Addicted to Arrested Development" community on Facebook and the results of a recent poll were unanimous - 94% of users are already counting the days to the movies release.

Anonymous said…
You know, I'm glad to hear it, but I don't see this making ANY money at the box office.