The Price of Loyalty: Sacrifice and Steadfastness on "Damages" 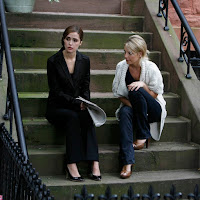 Wow. If there was one thing I didn't expect it was that ending.

I've wondered about shady Uncle Pete since the pilot and last night's episode of Damages ("New York Sucks") filled in the backstory on Uncle Pete (Tom Aldredge) and fleshed out his criminal past, his personal life, and his relationship to Patty.

For such a minor character, Pete McKee has maintained a pivotal role in the Damages mythos: never questioning Patty's judgment, carrying out her dirty work, operating behind the scenes to keep her interests safe and secure. For all of her armor, Pete is the only person to truly be connected with Patty as he literally knows where all of the bodies are buried. And yet, despite their shared history and the many secrets they shared, I never, ever saw THAT coming.

Pete. If only Pete hadn't been caught by Ellen snooping around on her computer after hours, he would likely still be carrying out Patty's more underhanded dealings. But in that moment, Ellen knew that Pete could be flipped and used to take down Patty. But she didn't quite count on the depths of his loyalty or just how far he would take things in order to protect his niece. I love that we learned that Uncle Pete actually IS Patty's uncle Pete and that he has a long criminal history dating back 50-odd years. He gave the order to have Ellen killed that night yet he's also as gentle as can be with his dying wife Stefania (Sex and the City's Lynn Cohen), who only has a few months to live.

It seems the Feds are as ruthless as Patty herself: they know how to find Pete's weakness and exploit it, pressuring him into flipping against Patty in order to see out his wife's final days by her side. Yet Uncle Pete has clearly learned a lot from Patty herself as he play the game using the feds' rules. In exchange for evidence that will "put Patty away," he will not go to jail for racketeering charges. So off they go to the trunk in the storage locker... which turns out to be as empty as Uncle Pete's promises. Seems as though Pete is so loyal to Patty, so willing to die in order to protect her, that he overdoses himself on his wife's medication rather than speak against his niece, without whom he would be "a bum on the street." I actually surprised myself as I assumed, wrongly, that Pete would turn state's evidence against Patty in exchange for his freedom. Pete proved me wrong: like a faithful retainer, he is willing to go quietly into the night just so he won't betray Patty. If that's not loyalty, not love, I don't know what is.

So is Uncle Pete dead? Answer: it doesn't appear to be that way just yet but, from the look of the scenes for next week's episode, it seems as though Pete is clinging to life. But will Patty return his favor by silencing him forever? We'll have to wait to find out.

Kendrick. I'm still not entirely sure what Kendrick's plan is but it now appears to involve a cocaine and hooker-fueled Wall Street trader named Finn Garrety (Kevin Corrigan) who uses the GPS coordinators provided by Kendrick--and entered by The Deacon--in order to receive a code of some kind. A code which instructs him to make a trade at 2 pm in the afternoon. Just what this trade is remains to be seen but it involves the energy industry and will inflate the value of Kendrick's stock... and it was important enough for Kendrick to pull some strings and get Garrety's name removed from that police report and have Claire Maddox degrade herself by representing that hooker in court for cocaine possession.

Which is worrisome to me as Kendrick is either slipping (why not have another trustworthy lawyer rep the pro other than his extremely visible chief counsel?) or he wanted Patty to find out about the girl and Garrety. I'm leaning more towards the former rather than the latter, though I am surprised that Dave Pell would allow him to make such a fool-headed blunder. Luckily, Tom happens to be in court that day and sees the whole thing play out... and then manages to discover Garrety's name.

Katie. I'm glad that Katie is back in play again this season. Ellen needs an ally against Patty and Frobisher and, for all of her mistakes, Katie needs Ellen as much as Ellen needs her. I was glad to see the two of them reach a rapprochement on the stairs and share information about the security firm that Frobisher uses whom Katie's cop was moonlighting for. I'm hoping Katie sticks around as I'm still convinced that she has more dirt on Frobisher than she realizes and perhaps can even connect him to Lieutenant Messer as well. Is that why Messer is so concerned now that Katie has returned to Manhattan and become enmeshed in Ellen's orbit? Still, I am worried now that Wes has set his sights on Katie as Ellen brushed off his advances this week. Katie is very susceptible to the wrong kind of man, after all.

Patty. I was surprised that Patty would go along with Frobisher's plan and even use his words (building, not tearing down) in that speech. After all, given the zeal with which she went after Frobisher last season, doesn't she come off looking less than credible now that she's hosting a press conference and proclaiming what a great friend and humanitarian Arthur Frobisher us now? How does that help her reputation? Unless, she's willing to sacrifice it in order to use Frobisher to go after Kendrick and Ultima National Resources? Or was it all a ploy to find a way to investigate Frobisher's financials and discover a lead for Ellen? Could Patty be attempting to find a way to divert Ellen away from coming after her by giving her a juicy target in Frobisher and proving her own supposed loyalty to Ellen by providing her with the first credible lead she's gotten so far on a silver platter?

What did you think of this week's episode? Just why is Messer so concerned about Katie Connor? Were you as shocked as I was by Pete's decision to kill himself instead of betray Patty? Will Frobisher be Patty's coup de grace or her downfall? Discuss.

Next week on Damages ("They Had to Tweaze That Out of My Kidney"), Patty deals with the discovery that the feds had Pete in their grasp and must weigh her next move as pressure mounts against her; Patty begins to unravel Kendrick's energy scheme; Frobisher's past comes back to haunt him.

Anonymous said…
I realize that Kendrick is a bigger fish to fry than Frobisher but I am still surprised that Patty is in cahoots with Fro...even if she is just using him. It just seems a little odd to be singing the praises (even falsely) of a man you invested so much time and energy into bringing down.
2/19/2009

Anonymous said…
Is there a problem with this Damages link? I go to read the full article but nothing comes up.
2/20/2009

Unknown said…
It looked to me as if Pete also doomed Stefania by throwing away her meds. (I don't think he ODd on her inhaler, which was in the trash.) My interpretation is that Pete didn't want Stefania to die alone, so he chucked her meds. The "I'm sorry" was meant as an "I'm sorry I had to kill us."

Why does Kendrick have to use Garrety at all? Any schmuck can use E-trade to make a trade at 2pm. And his use of his general counsel in a criminal hearing was absurd. Any attorney could've made that argument.
2/20/2009