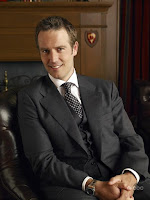 Welcome to your Tuesday morning television briefing. I hope everyone had a very happy three-day weekend. (I know I did.) A few headlines on yet another rain-soaked day in Los Angeles...

Former Alias star Michael Vartan has joined the cast of TNT drama series Time Heals, where he will replace Jeffrey Nordling in the role of Tom Wakefield, the director of medicine at the hospital where Christina Hawthorne (Jada Pinkett Smith) is the director of nursing. Nordling played the part in the series' original pilot. Move marks Vartan's return to series television since he last starred in ABC's short-lived drama Big Shots. (Hollywood Reporter)

TV Guide's Mickey O'Connor offers up some solutions to save CW's Gossip Girl, which he believes is creatively "starting to stink like so much day-old smoked salmon." Among the series' problems that O'Connor points out needs addressing: Serena and Dan's on-again-off-again relationship, the under-utilization of Zuzanna Szadkowski's Dorota, Chuck being portrayed as a "38-year-old lothario celebrating his latest divorce," Chace Crawford's snooze-inducing performance as Nate, a lack of focus on Jenny, and too much meanness towards Brooklyn. Do you agree? (TV Guide)

Geoff Stults (October Road) has been cast in ABC drama pilot Happy Town, from creators Josh Appelbaum, Andre Nemec, and Scott Rosenberg, where he will play Tommy, Haplin's newly appointed sheriff who has to solve a grisly murder case, the town's first such crime in seven years, after his father is removed from office. Elsewhere at ABC, Kiwi actor Martin Henderson (Smokin' Aces) has been the first actor cast in Shonda Rhimes' drama pilot Inside the Box, about reporters at a Washington news bureau who "[pursue] 'the story' at all costs while juggling their personal animosities and crises of conscience." Henderson will play Jake, the right-hand man to Catherine, an ultra-ambitious news producer, with whom he shares more than a little bit of chemistry. (Hollywood Reporter)

Late Night with Jimmy Fallon, which launches in less than a month, has hired A.D. Miles to serve as its head writer. Miles will work closely with executive producer Lorne Michaels and showrunner Michael Shoemaker. (Variety)

CBS has ordered a pilot presentation for unscripted series Thunder Road, in which two teams must drive a racing course filled with obstacles a la ABC's Wipeout. Project, from Warner Horizon and Wonderland, is executive produced by McG, Scott Messick, and Justin Hochberg. (Hollywood Reporter)

Cartoon Network has ordered 26 episodes of animated series Marvel Super Hero Squad, in which heroes Captain America, Hulk, Wolverine, Iron Man and Silver Surfer team up to battle crime. Series, executive produced by Alan Fine, Simon Phillips, and Eric S. Rollman, will debut in late 2009 on the cabler. (Meanwhile, I can't help but think that it's not quite The Avengers but not quite The Defenders?) (Variety)

SCI FI Wire talks to Fringe's Joshua Jackson about what to expect when the series returns in April with new episodes as Peter struggles with his relationship with his father and Olivia discovers some long-buried secrets about The Pattern. (SCI FI Wire)

The CineManiac said…
The Rhimes show sounds a lot like the show she was supposedly preping for Jeffrey Dean "Denny" Morgan a few years back.
Is it in fact that same show, and if so will Morgan be involved?
2/17/2009

Anonymous said…
RE: Mickey O'Connor's thoughts about Gossip Girl, I definitely agree that the Serena/Dan relationship has become tedious and that Nate is a bore. However, as much as I love Dorota, I think that they are already pushing the limit with her character. She is brilliant in small doses but I think that too much Dorota would just be over the top (and not in a good way).
2/17/2009