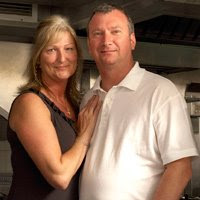 If you're not watching the series, you're missing out on what must be one of the very best food-themed series on the air today (yes, I'd definitely place it squarely alongside Bravo's Top Chef) but also one of the most tense and revealing hours on television, as everyday couples (spouses, friends, fathers and daughters) are pushed to their limit when they open their own eateries. I like to think of it as Top Chef meets The Amazing Race, only without the Pit Stops and frequent flier miles.

This week's episode ("Pay What It Is Worth") had the eight remaining teams asking their customers to only pay what they believed their meal was worth. For one team--Alasdair and James--it was the first time on the series that they got to open their restaurant (if you remember, they missed Opening Night due to a gas leak) and for others it was an opportunity to push themselves to do better than they had the week before.

So which teams impressed me and which ones astounded me? Let's discuss.

I have to say that if I was going to choose one restaurant to eat in out of the teams' eateries so far, I'd have to say that James and Alasdair's The Gallery would be it. Despite some teething problems on their Opening Night--the lack of cutlery presented to inspector Sarah Willingham, the maddeningly reductive menu, the squabbling over the arrangement of the bread--The Gallery so far seems the most like a professionally-run establishment. While Alasdair definitely needs to fine-tune his lacking attention to detail in the front-of-house, James definitely wowed me (and Sarah) with his cooking, a full head and shoulders above the mess he served Raymond in the first episode. The salad of scallops and beetroot looked exquisite as did the sea breem but James definitely needs to get his head around the notion of adding value. Yes, guests would be surprised by just how lavish their dishes were compared to the sparse descriptions but his menu offerings were so blase that it would be hard to get the punters in in the first place.

Stephen and Helen clearly have something going for them at Nel's and it made sense that, given the number of covers they did, Raymond would award them Restaurant of the Week. Still, Helen now needs to elevate the look and presentation of her food, which is far too messy and housewifey and doesn't immediately scream restaurant-level cuisine. Stephen is a superb front-of-house manager and their restaurant was buzzy, filled to the brim, and convivial. It's just the food that needs some work. Pleasing the kids is a good thing but it's the parents, after all, who have to pay and this duo will have to work a little harder to make them happy.

I was shocked that, when faced with dwindling supplies, Tim would start cutting portions of food in half (or into increasingly smaller fractions) rather than tell customers that they had run out of specific dishes. This was especially a problem when he would send over vastly different portion sizes to the same table, as he did with the summer pudding or the gateaux (which was cut from the US telecast). I'm glad Lindsie finally put her foot down and told him to stop doing it; sadly, however, it's clear that her head is not in the game. This experience seems to be Tim's dream rather than a shared one and it shows in her lack of knowledge about the food. Yes, she is missing their child but I wonder if Tim should have gone on the series with a different partner.

Richard and Scott are not long for this competition. I just don't understand their Sorbets & Seasons concept as they are not cooking seasonally nor are they showcasing sorbets, despite being told by Raymond that they better get sorbets on the menu fast. I don't understand why they would not follow Raymond's advice and changed their ghastly sorbet to a soup at the last minute... but didn't update the menu. They've now had multiple opportunity to refine their concept (or throw it out the window) but haven't. And they still don't seem to understand what most people enjoy about sorbet in the first place. An avocado mousse on top of a crab salad does not a sorbet make.

Mike and Harriet once again played it way too safe and tried to overthink things by only serving 13 people in their restaurant... on purpose. I get that they are trying to refine before building, but this was beyond ridiculous. They need to step it up and fast and Mike has got to learn to be more polished and less confrontational towards the guests. His impulse to demand payment for drinks after making people wait two hours for food (after they prebooked their requests days earlier) was unforgivable.

Still not understanding Laura and Peter's Welsh-Chinese concept and clearly they aren't either. But the woefully overcooked rice (sticky and crunchy) that Peter served was inexcusable. They really need to sit down and rethink what they're trying to accomplish at the Welsh Wok.

We didn't really see enough of Michele and Russell to see just why Raymond put them in the challenge but she seems destined for a minor breakdown as she overbooked their restaurant, The Cheerful Soul, and couldn't get a handle on running the front of house.

Who are you rooting for so far? Who do you think will sent home next week after Raymond's first Challenge? And who can go all the way to get their very own restaurant? Discuss.

Next week on Last Restaurant Standing ("Motorway Service"), Raymond challenges three teams to set up shop at a motorway service station and convince hungry travelers to eat at their food bars.

Anonymous said…
I agree with you about The Gallery. Even though James can be difficult, the food they served on opening night looked wonderful and I think they have a lot of promise.

As for who will go home next week - I hope it's not Mike and Harriet. I still don't know what Harriet can do and feel that her father keeps mucking things up. I'd be happy if Richard and Scott lost the challenge because I don't think they have a clue about their restaurant concept. I loved how Sarah couldn't help but laugh when they were trying to explain to Raymond how they didn't have any sorbets on their menu except for one which had actually been changed to a soup!
2/04/2009

Anonymous said…
I love how Sarah has lightened up this season. Last season she was too serious all the time. she seems to be laughing more and making jokes about the restaurants. Everything feels much more awesome this season
2/04/2009

I definitely agree that Sarah is much looser and more light-hearted than she was in the first season. I also think it helps as David Moore seems at times so dour and serious that having Sarah crack a joke or look at the camera as though to say, "WTF?" definitely helps.
2/04/2009

Anonymous said…
I was in the UK this fall and saw the entire season. It's simply sublime and, to my embarrassment, it became appointment television. (Since it was on BBC2 instead of a cable channel, there were no replays.) Sarah Willingham will continue to be amazing. I only wish I had BBC America now that I'm back in the US so I could watch the season again.
2/04/2009

Thanks for the suggestion - I am really enjoying the show. Watching it back-to-back with Top Chef makes for a great 2 hours of food-watching tv.

Are you bored with Top Chef this year? I noticed the recaps have stopped. Being from New York, I am bothered Top Chef has not incorporated the city of New York into the challenges.
2/04/2009

Anonymous said…
I agree that Sarah is much looser and more light-hearted than she was in the first season.I loved how Sarah couldn't help but laugh when they were trying to explain to Raymond how they didn't have any sorbets on their menu.