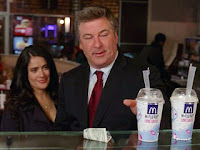 30 Rock creator/star/writer/executive producer Tina Fey has set the record straight about the series' alleged product placement in last week's episode, in which Jack and Elisa (Salma Hayek) declared their love for McDonald's McFlurry as "the best dessert in the world." Fey says that the segment was NOT an example of product placement.

“It gives me great pleasure to inform you that the references to McDonald's in last night's episode of 30 Rock were in no way product placement. (Nor were they an attempt at product placement that fell through.)" said Fey in a statement. "We received no money from the McDonald's Corporation. We were actually a little worried they might sue us. That's just the kind of revenue-generating masterminds we are. Also, the upcoming story line where Liz Lemon starts dating Grimace is just based on a recurring dream I have. Seriously, though, it's not product placement. Also, whoever is writing my Twitter account is pretty funny, but it's not me.” (Entertainment Weekly's Hollywood Insider)

Alexis Dziena (Invasion) will join the cast of HBO's Entourage, where she'll play "Ashley, a beautiful, funny, smart, grounded, self-assured, non-Hollywood-type who, to everyone's great surprise, develops an interest in Eric." But there's allegedly a catch and/or a twist to this relationship. Any theories? (Entertainment Weekly's Ausiello Files)

ABC has given a director-contingent pilot order to comedy Funny in Farsi, based on Firoozeh Dumas' novel about growing up as an Iranian immigrant in 1970s Orange County. Project, from ABC Studios, will be written/executive produced by Nastaran Dibai and Jeffrey Hodes. (Variety)

Dollhouse fans were likely not too pleased by the low ratings for the series' premiere on Friday night on FOX, which lured only 4.7 million viewers. While some were quick to yell "doomed," others, like Entertainment Weekly's Lynette Rice, had an alternate take on the news. "What does this mean for Dollhouse's long-term prospects?" asked Rice. "Although 4.7 million isn't that great -- Fox typically averages 5.5 million on Fridays -- the Whedon drama has a better chance of making it over the long haul if it stays put on the night. In fact, network insiders have long cautioned that if the series were scheduled earlier in the week and ended up attracting these kind of (low) viewership levels, it would have been axed by its second or third airing. So relax, Whedonites -- Dushku and Co. appear safe for now." (Entertainment Weekly's Hollywood Insider)

Anonymous said…
It's even worse that the McFlurry references were not product placement since that's how it came across. (I loved the episode other than that.)

But I think Fey's comment about Twitter is particularly funny as it's clearly someone else using her name (and trying very hard to be clever).
2/17/2009