Getting Animated with "Wolverine and the X-Men" and "Batman: The Brave and the Bold" 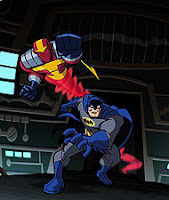 Most people don't realize that I am a sucker for a good cartoon, especially if it's based on a well-known superhero comic property. I still put on my DVDs of Batman: The Animated Series when I need a little pick-me-up and I thought X-Men: Evolution was canceled way before its time.

So imagine my surprise when I learned that not one but two fantastic new superhero-based animated series are currently running on Friday nights and they couldn't be more different from one another.

Nicktoons recently launched a third animated iteration of the X-Men franchise, this time entitled Wolverine and the X-Men, focusing on Marvel's band of misunderstood mutants with Wolverine front and center. (It makes sense, given the forthcoming release of feature film X-Men Origins: Wolverine starring Hugh Jackman as the adamantium-clawed mutant.)

And Cartoon Network late last year launched Batman: The Brave and the Bold, which features the Dark Knight teaming up with various other superheroes--ranging from Blue Beetle and Green Arrow to Plastic Man and Red Tornado--to fight crime. It couldn't be more different, in terms of tone and visual style, than the previous animated Batman series, The Batman.

I'll admit that I had pretty low expectations for Wolverine and the X-Men going in. After all, Wolverine has a major tendency for overexposure and I couldn't quite put my finger on why him leading the X-Men just felt so... off. However, any trepidation I had about the plot twist was erased when I saw just how intrinsic the series' writers--once again Craig Kyle and Greg Johnson--made him to the overarching story.

Rather than serve up yet another origin story for the group sworn to protect those who fear and hate them, Kyle and Johnson concoct an intriguing plot that involves an attack on the Xavier Institute that destroys the school and results in telepaths Charles Xavier and Jean Grey vanishing. A year later, a solo Wolverine attempts to track down Charles and Jean and unmask the villain responsible for the attack, putting together a new team that reunites him with some of his former teammates including Beast, Shadowcat, Iceman, and Forge. They're joined by icy telepath Emma Frost and the mansion is rebuilt by the benevolence of former teammate Warren Worthington (a.k.a. Angel).

It's a convincing set-up for a series and gives the team a clear purpose and throughline: they have to try and save Xavier and Jean, battle a slew of evil mutants (including the mutant terrorist group The Brotherhood of Mutants), fight tyrrany and prejudice in the form of Senator Kelly's Mutant Response Division, which is detaining mutants, and prevent a dystopic future from coming to pass.

It's definitely a darker version of an animated X-Men cartoon than the relatively sunny 1990's animated mainstay or the more recent teen-oriented retelling of the X-Men story (X-Men: Evolution), which recast many of the familiar characters as teenagers at Xavier's school under the tutelage of more mature professors.

Wolverine and the X-Men definitely stands in its own category, aided by a gorgeous mix of 2D and 3D animation styles, fantastic voicework from the actors, and a story that features a wide array of characters in addition to the core cast (including lesser-known characters like Domino, Spiral, Polaris and Squidboy). While the story tends to lag a bit when it focuses too heavily on Wolverine as a solo character, the episodes that truly shine are those in which the full team plays a large role in the mission or those that focus on a supporting character, such as Storm or Nightcrawler.

Whereas Wolverine and the X-Men takes a darker approach to telling a superhero-based story, Cartoon Network's Batman: The Brave and the Bold takes a vastly different tack, injecting the story of the World's Best Detective with a vintage retro feel that seems a throwback to a simpler time. It features Batman teaming up with an array of characters that are somewhat lesser known than his comperes in the Justice League. Don't look for Superman or Wonder Woman to turn up any time soon; instead, Batman often foils evil with the help of such superheroes as Green Lantern, Plastic Man, Blue Beetle, or Wildcat.

Batman: The Brave and the Bold has a delicious wink, wink, nudge, nudge kitschiness and seems to relish offering a witty and sly take on the Batman mythos, often depicting characters in fun and intriguing ways. (The series' take on the buffoonish and self-absorbed Aquaman often has me roaring with laughter.)

Unlike Wolverine and the X-Men's sophisticated mix of animation techniques, Batman: The Brave and the Bold has a distinct visual style that seems to recall the designs of 1940s and 1950s comic book artists like Jack Kirby: Batman is all square jaw and All-American brawn; there's none of the darkness that pervaded his character in the 1980s and later.

Both series are inherently fun while offering very different spins on some much beloved characters and both couldn't make me happier or more nostalgic for those old days reading a pile of comics as a kid.

Anonymous said…
Jace - thanks for the great animation review! I love "Batman: The Brave and the Bold." It's definitely kitschy but in a good way and the humor is top notch (I love their version of the bloated-ego Aquaman).

ticknart said…
Just to throw it out there for those who are interested, Dick Sprang's art on Batman from the 40s and 50s was the design inspiration for Batman: Brave and the Bold, and the dark knight has rarely look better.
2/24/2009

Anonymous said…
The animation in Brave and the Bold is fantastic and it really is a fun and witty incarnation of Batman.

I also enjoy Wolverine and the X-Men and think the story and voice work are solid (although I agree with you that, sometimes, the story can feel a little slow when it just focuses on Wolverine). The last episode with Nightcrawler was great.
2/24/2009