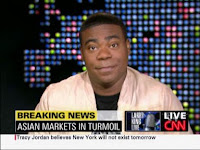 I may have to take the X train to Zorgonia Avenue Station.

Just a few quick thoughts the morning after the latest episode of 30 Rock ("Jalisa"), previously known as "Larry King," in which Liz and Kenneth attempt to retrieve her lost mobile phone (with a saucy "adult" photo of Liz on it) from a cab driver in Queens, Jack and Elisa try to take their relationship to the next level, and Tracy causes pandemonium in Manhattan when he speaks about the Asian market crash on Larry King's eponymous CNN talk show.

While this week's episode didn't feature any of Jon Hamm's Drew Baird, he was an integral part of the plot nonetheless as the "boobies picture" he snapped of our Liz Lemon on her phone lead to a standoff with a extortion-ready Queens cab driver who didn't quite understand the point of "opposite day." I loved the fact that only Kenneth was willing to accompany her to Queens but wanted her to actually call him her "friend" out loud as traveling outside of Manhattan on official page business was verboten... and Liz returned the favor by lying to Kenneth about the real reason she wanted the phone back, making up an elaborate story about Nana Lemon, Nena's "99 Luftballons," and her birthday.

What else did I love? Kenneth getting tagged; Liz getting her purse snatched by a gang of unruly pre-schoolers; the guys tearing up the TGS offices looking for Tracy's secret treasure... and Kenneth realizing that he is the answer to Tracy's riddle; Pete getting confused for Peter Frampton; Jonathan's video of himself bare-chested and playing the flute; Don Geiss' prescient warning to "avoid the noid" on his video to GE executives; the return of Jorgensen; Elisa's present of a caricature of herself on a skateboard to Jack; Kenneth inviting Liz to an "asbestos removal" party at his apartment; Geiss having a "manstress" as well as a mistress; Tracy recounting the entire plot of Teen Wolf to an incredulous Larry King; his recounting of his casting in Rush Hour and how he was replaced by Jackie Chan; his warning about how "your Lexus is going to turn back into a pile of hot rats fighting over a human finger." Basically anything involving Tracy this week, really.

Best lines of the evening:

"Adult? You mean like you’re driving a car or wearing a suit?" - Kenneth to Liz, attempting to define "adult picture."

"Capitalism is ending. Either because of the Soviets or something crazy like a woman president." - Don Geiss

Next week on 30 Rock ("Goodbye, My Friend"), Liz befriends a pregnant teenage doughnut shop employee, in an effort to adopt her baby; Jenna demands more attention from the TGS staff as her birthday approaches; Jack bonds with Frank over their shared issues with their fathers on a night out with the guys.

Anonymous said…
I actually wasn't that crazy about this episode, although it did have some great one-liners (Kenneth's definition of an "adult picture" was my favorite too). I just thought that the Liz/cell phone storyline was ho-hum. I really enjoy Liz/Jack storylines and the two of them haven't shared many scenes together since Elisa came into the picture.
2/27/2009