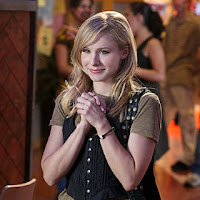 That noise you hear is the fanboy inside me jumping up and down over the news that the much-anticipated Veronica Mars feature film had inched ever closer to becoming a reality.

Sure, there are no guarantees that said feature will ever materialize but the fact that creator Rob Thomas is preparing to pitch the project to studio execs--and has an outline for the majority of the feature film script in place--does bode well. For one, it proves that Thomas is definitely working on the project, despite having a number of other projects in the works, like Starz comedy Party Down, which launches in March, and ABC's Cupid. (Though Cupid did recently have its episode order cut down, so Thomas does have a bit more time on his hands.) Furthermore, it points to the fact that Thomas believes a Veronica Mars feature film has legs.

"I'm preparing the pitch now -- literally now," Thomas told Entertainment Weekly's Michael Ausiello. "I hope to go in and talk to [executive producer] Joel Silver and [Warner Bros.] in the next week or two to see if they're interested."

Thomas is still said to be hashing out details of the feature film script's plot, which follows intrepid sleuth Veronica Mars (Kristen Bell) as she solves a crime on her college campus, though he hasn't quite cracked the script's final act. "I haven't figured it out yet," said Thomas. "That's what I'm working on now. It's close. A few key details left to solve."

But before fans start lining up outside theatres in order to get their first glimpse at Neptune since the CW/UPN series came to an end in 2007, there are a few things that need to happen first. Like a studio greenlight.

"I have some fear that Veronica Mars fans believe that the chief hurdle in getting the movie made is my writing it," Thomas told Ausiello. "Unfortunately, that's only one of several hurdles. I'm going to give it my best shot and let the chips fall where they may. "It's entirely possible I won't have an answer at the end of the pitch. They will want to consider [the pitch], look at some numbers -- whatever it is people on the business side do -- and then they'll give me some sort of response. Then, if they want to move forward, there's the deal-making that'll need to go on."

While on the one hand I'm pleased as punch that a Veronica Mars feature may indeed get off the ground (should it successfully secure studio financing), I'm a little concerned that, given the current state of the economy, such a thing will never happen. After all, Veronica Mars had a fiercely loyal fanbase... but that devoted audience was particularly small, compared to the larger, mainstream audience a film would need in order to make financial sense to the studio.

Do you think Veronica will make it to the big screen to solve crime another day? Or will this big-screen version of the much missed series get stuck in development hell? Discuss.

Anonymous said…
I heart Veronica Mars as much as any loyal fan but I'm still not sure how I feel about a Veronica Mars movie. I just think the story worked best for television and it's a huge shame that the network didn't allow the show to continue. Plus, after months of VM withdrawal, I finally have found closure and am content to re-watch this brilliant series on DVD. Again, and again, and again...
2/09/2009

Anonymous said…
I hope this gets the financing it needs. But if it does, there's no reason it couldn't be a success in theaters. Firstly, I don't see why it would need a huge budget. Secondly, as long as the trailers didn't mention the TV show it could easily draw in new people who've never even heard of the show.

Anonymous said…
From previous reports it sounded like some private funding for the movie production was going to be on the table. With the current economic climate in mind and Kristen Bell as a rising star this project could be attractive oppose to something that is not a previously tried concept that would come with a built-in audience.