Missing "Chuck" This Week? Take a Sneak Peek at "Chuck Versus the Suburbs" 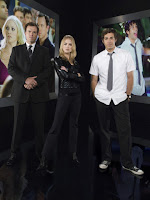 And, oh, guest stars Andy Richter and Jenny McCarthy drop by to lend a not-so-neighborly hand to our would-be lovebirds.

(And those of you anxious to know what happened to "Chuck Versus the Best Friend," which was slated to air on Monday can rest assured: it's going to air on Monday, February 23rd.)

"Chuck (Zachary Levi) and Sarah’s (Yvonne Strahovski) latest assignment forces them to pose as a happily married couple living in the suburbs. They meet some interesting characters including Brad (guest star Andy Richter), a cheerful next-door neighbor in the stationary business, and Sylvia (guest star Jenny McCarthy), a seductive and attractive woman who lives across the street and has her eye on Chuck. Meanwhile, Big Mike (Mark Christopher Lawrence) is on a work rampage after his wife files for divorce, so the Buy More gang sets him up on a dating website to keep him distracted. Joshua Gomez, Sarah Lancaster, Scott Krinsky and Vik Sahay also star."

And if that's not enough Chuck goodness for you, go behind the scenes with this NBC video about the episode, featuring Zachary Levi, Jenny McCarthy, Andy Richter, and Yvonne Strahovski.

"Chuck Versus the Suburbs" airs Monday night at 8 pm ET/PT on NBC.

Anonymous said…
Ha! This looks like a really fun episode. Thanks for the preview, Jace!
2/11/2009

Looking forward to this episode!

The CineManiac said…
You had me at Richter, then doubley had me at McCarthy (Rowr!)
Of course this being Chuck I'd have been watching regardless.
But I'm a bit disappointed that our new Pres kept me from my weekly Chuck goodness.
2/11/2009