Less Love for "Cupid" at ABC? 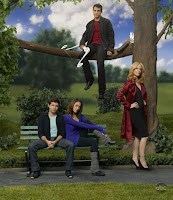 It definitely seems as though there are some problems with ABC's relaunch of romantic drama Cupid and not of the romantic kind.

The series, which stars Bobby Cannavale, Sarah Paulson, Rick Gomez, and Camille Guaty, was originally slated to air this spring with 13 episodes. Back in December, it was widely reported that ABC slashed Cupid's episodic order to nine episodes, including the pilot, and announced that the series would premiere on Tuesday, March 24th.

Today, ABC indicated that it would bump Cupid's premiere back a week to Tuesday, March 31st. However, that's not the only news for the Rob Thomas-executive produced series.

A source within ABC Studios, speaking on condition of anonymity, has told me that ABC has once again cut Cupid's order, this time to seven episodes, including the pilot.

The reason behind the reduced order? That old standby: creative differences, according to my source, who tells me that Cupid's writers had sent the network story beats for the last two installments of the original nine-episode order. The network was said to be displeased and asked the writers to submit outlines for the two episodes. After allegedly being unhappy with the outlines, ABC then informed the production that they were cutting the order back by two episode due to creative differences.

ABC, however, maintains that the reduced order they handed out in December had been for eight episodes including Cupid's pilot, rather than the widely reported nine installments, though they did acknowledge that they had now slashed the order to seven episodes.

Furthermore, ABC states that the decision to reduce Cupid's order was based on scheduling rather than creative concerns. Once the premiere date was shifted, that eighth episode was no longer needed.

Is it possible then that creative concerns allowed ABC to cut the order once more, bringing Cupid's episodic total to nearly half of its original order, thus enabling the network to cut costs in the process and free up another week in the schedule? Perhaps.

However, regardless of the cause, the end result remains the same: this Cupid will only be firing seven arrows this season.

Anonymous said…
I was worried when ABC originally cut the episodes back but this does not sound good at all. The network can spin it however they want but it doesn't scream confidence in the series.
2/03/2009

Anonymous said…
Ouch. Does not bode well for the show getting picked up beyond those eps.
2/03/2009

Anonymous said…
Even though I'm not THAT excited for this show or anything, this is disappointing stuff to here. If it means more time for Rob to write his Veronica Mars movie, fine. But still, this show has promise and I think ABC should have kept it's 13-episode order (same for The Unusuals and Castle).
2/04/2009

Anonymous said…
Yikes. Not a good sign at all. If only they'd let Thomas continue with Veronica Mars. Sigh.
2/04/2009

The CineManiac said…
Why did ABC even order Cupid back to series if they are just going to run it into the ground and cancel it?
For awhile I was really excited about ABC with it ending Lost as the creators wanted, bringing us shows like Pushing Daises and Eli Stone and reordering Cupid.
But since then they've canceled PD & ES and screwed up Cupid.
To say I've lost confidence in the network would be an understatement.
2/04/2009

Anonymous said…
I hate when the networks do that, well if it doesn't work out; the best they could do is Send Bobby back to the show " Cold Case", and let him return to play that lovely Narcatics guy.
2/04/2009

Anonymous said…
Me thinks the writers wanted to throw in some sort of GLBT storyline for an episode or two, ABC's standard and practices objected because they obviously think homosexuality is an abomination and decided that straighty sexuality is fine, but if two guys or two girls kiss and talk about their sex lives as if it was okay because they weren't gay than that's crossing a line. This may be the case, may likely not be the case, but since ABC started de-gaying the network by firing significant writers and actors, and obviously toning back scenes depicting homosexuality in some of their most prominent shows, ABC's become the homophobic network.

It makes some sort of sense considering the dramatic possibilities such storylines would bring to the show, ten years later after the taboo has been lifted from decent minded masses.
2/04/2009

Anonymous said…
I guess every 10 years ABC needs it's "Love Boat" and "Cupid" fits the bill for 2009. Sorry to hear about the episode tweeks but this show just doesn't interest me.
2/04/2009

rockauteur said…
This show looks terrible. I understand remakes are all the rage, but seeing the track record, why would anyone think redoing a brilliant show that was also on not too long ago, would be a good idea. ABC should just put this show out of its misery before audiences do and let Rob Thomas focus on getting the rumored Veronica Mars movie made (and his Starz channel comedy series).
2/04/2009