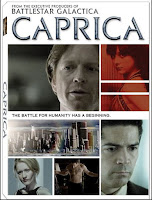 Universal City, Calif. - Caprica, the highly anticipated prequel to Battlestar Galactica, will enjoy its world premiere exclusively on DVD on April 21, 2009 from Universal Studios Home Entertainment. In a groundbreaking move sure to delight fans of the long-running television phenomenon, the feature-length prequel will be available on DVD as a limited-edition uncut and unrated version before the series’ broadcast premiere on the SCI FI Channel in 2010. Caprica is executive produced by Ronald D. Moore and David Eick (Battlestar Galactica) and Remi Aubuchon (24). Exclusive bonus features that take viewers behind the scenes of the creation of Caprica make this DVD a landmark event for any fan of Battlestar Galactica. The film will also be available at selected online destinations for digital download transactions.

As Battlestar Galactica wraps its gripping final season on SCI FI on March 20, 2009, Caprica begins a brand new epic saga that continues the franchise’s commitment to thought-provoking storytelling and extraordinary characters. Set over 50 years before the events of Battlestar Galactica, Caprica is a world at the peak of its power, grappling with new science and technologies and the issues they create. The series will star Golden Globe nominee Eric Stoltz (Mask, Pulp Fiction), Esai Morales (Jericho, NYPD Blue), Paula Malcomson (Deadwood, ER) and Golden Globe® nominee Polly Walker (Cane, Rome) in a story laced with passion, intrigue and family conflict.

“We are thrilled to take the groundbreaking step of offering the world-premiere of the Caprica feature-length extended pilot episode on DVD prior to the new series’ television debut,” said Hilary Hoffman, Senior Vice President, Brand and Digital Marketing for Universal Studios Home Entertainment. “This innovative distribution model will serve to satisfy Battlestar Galactica fans’ appetites for a new content while building excitement for the franchise’s next great adventure."

“Ever since fans first caught wind of the Battlestar Galactica prequel Caprica, they have been eagerly following its development,” said Mark Stern, Executive Vice President, Original Programming for SCI FI & Co-Head Original Content, Universal Cable Productions. “We wanted to give them a chance to see the pilot in its original form and experience the prequel to the BSG story while that series’ finale was still ringing in their ears. It also affords the creative team an unprecedented chance to get viewers feedback before production on the Caprica series begins this summer.”

“Part sweeping soap, part meditation on the dangerous moral ramifications of artificial intelligence, this is a truly unique opportunity to continue telling stories which will be as daring and shocking as the best of Galactica -- and yet will be altogether different from Galactica,” said David Eick, Executive Producer.

Universal Cable Productions will begin production on the Caprica series in the summer of 2009 in Vancouver for a 2010 television premiere on the SciFi Channel. The DVD of Caprica is priced at $26.98 S.R.P. Preorder close is March 3, 2009.

Technical specs for the DVD release can be found below.

Set 50 years before Battlestar Galactica, Caprica follows two rival families and their patriarchs – Daniel Graystone (Eric Stoltz) and Joseph Adama (Esai Morales) – as they compete and thrive in the vibrant world of the 12 Colonies, a society recognizably close to our own. Enmeshed in the burgeoning technology of artificial intelligence and robotics that will eventually lead to the creation of the Cylons, the two houses go toe-to-toe blending action with corporate conspiracy and sexual politics.