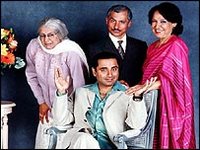 I am not usually a talk show kind of guy. While I get the appeal of Conan, Leno, and Letterman, I usually find the entire format a bit rigid and more than a little overly PR-ified (for lack of a better word). Celebrity comes on, promotes latest film/TV series/diet pill/exercise regimen, the host cracks a few jokes, and everyone is on their merry way.

So it's a pleasure then to spend a Friday evening with The Kumars at No. 42, a hybridization of the sitcom/talk show format, with some improvisational comedy thrown in for some extra spice. This series is unlike any talk show that I've ever seen, blending together the comic highs of the sitcom, with the interactivity of a talk show. Plus, the "Kumars" themselves are hilarious, portraying deliciously funny characters that instantly disarm the celebrity they're interviewing and usually wind up sending them into paroxysms of laughter. It's a novel conceit that has no real corollary here. (The closest thing I could think of would be The Daily Show with Jon Stewart, but even that's not even close.)

Here's the setup: In North London, the Indian Kumar family has turned their back garden into a studio to indulge their terribly spoiled adult son Sanjeev (Sanjeev Bhaskar of Goodness Gracious Me) who has dreams of being a successful talk show host. Each week, they invite a celebrity guest round to their house for some nibbles and an improvised chat before moving into the studio, where Sanjeev interviews their guest before a live studio audience. But the arrogant Sanjeev's family just keep interjecting with their own thoughts/questions/random comments, all of which add up to the most hilarious celebrities interviews I've ever seen.

The Kumars are a notoriously wacky bunch: Sanjeev's mother Madhuri (Indira Joshi) is the superlative hostess who can make the best samosas, his father Ashwin (Vincent Ebrahim) is a gruff businessman given to asking financial questions, and Ummi, his grandmother Sushila (in reality, the much younger Meera Syal), is a mischievous pixie whose questions are often inappropriate. And Sanjeev himself is a self-entitled cad, too egocentric to remember to thank his mum for bulldozing her beloved garden to build the glorious studio that they're in.

Producer Gavin Polone (Curb Your Enthusiasm) tried to import the series a few years ago and developed an American version of The Kumars at No. 42 with Fox about a Mexican-American family led by Cheech Marin. The series, called The Ortegas, actually filmed a number of episodes before getting shelved by the network and has never seen the light of day.

I'm not quite sure that the Kumars' particular brand of humor would have translated all that well to an American audience, but at least we've got the opportunity to catch the original series, which premieres its sixth season tonight on BBC America. Heat up some samosas, sit back, and join The Kumars at No. 42 as they dish some dirt, prod some celebrities, and collectively gang up on poor Sanjeev.

The semi-improvised sitcom/talk show hybrid returns with a new season of celebrity interviews. In the studio tonight: Harry Potter's Zoe Wanamaker and David Hasselhoff talking about, well, himself. Hmmm... I wonder if KITT will make an appearance and talk some trash about Michael Knight. (Not to be confused the Project Runway contestant of the same name.)

If you missed this outrageous sketch comedy's third season, here's your chance to catch it from the beginning. At the health spa, Bubbles runs into her ex-husband, while Dudley's Thai bride arrives. It's crass, it's offensive, and it's hysterical.

Vance said…
I love seeing the celebrities' reactions to the Kumars. Even when they know its coming, they always seemed surprised by how far the questions go (yet they still all seem to be having a good time). Love how grandma always gets hot for whatever handsome guest they have at the time. Hilarious!
8/11/2006

Scott said…
That is some funny, funny shit. And clever assimilation satire. I liked the precursor show, "Goodness Gracious Me," too. "We love all your English gods." :) :)
8/13/2006

Anonymous said…
Great characters. Great comedy. What more could you ask for?
8/14/2006