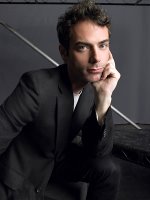 And then there were ten...

My instincts told me that the Project Runway evictee would be menswear designer Keith, a man as renowned for his innate abilities (that halter dress from episode 1 was stunning) as much as his constant "bending" of the rules (to wit: getting the Mood fabric store employees to give him a discount on materials). And while I'm glad that the reason he was booted by the series' producers had nothing to do with that scandal involving his design portfolio, I was surprised that Keith would actually keep fashion "how to" books laying around the flat, along with those damning pattern books. Especially if even being in possession of those verboten items is enough to get you dismissed from the show.

Guru Tim Gunn is right; a show like Project Runway lives and dies by its reputation. Without its integrity, Runway would be another vapid reality show and the show can't be seen allowing one designer to have a major advantage over the other contestants. Even if Keith claims that he never used the pattern books, the mere fact that he brought them into the competition shows that he had a real disinterest in adhering to the rules of the series. And what was with Keith's disappearance to use the internet, another Runway no-no, all about? While Tim said that the incident happened off-camera (though really, it's a reality show; when are cameras ever not rolling?), I am very curious to know what he used the internet for exactly. Something tells me that Keith wasn't checking his email...

I'm still flabbergasted by the fact that Angela actually won a challenge, but I'm going to assume that it was because she had the uber-talented Michael (a real dark horse at this point) and Laura on her team. And because she didn't put those damned twee rosettes of hers all over the outfit. (In Angela's case, less is always more.) The outfit itself, designed for INC, was actually really stylish, a wearably sleek ensemble that could be sold as separates or worn together. But I was actually rooting for Allison and tattoo-clad Jeffrey to win the challenge, especially as they were dealt a severe blow by losing their team leader on this challenge and had to work twice as hard to finish his design. (Not that Keith seemed to do much work when he was there, as shots kept showing him laying on the table "supervising" Allison and Jeffrey.)

There was no doubt in my mind that it would be poor Bonnie who would be auf wiedersehen'd. The girl finally came into her own in this episode (I've forgotten she's existed in the last few episodes altogether), only to get the boot in the end. But her design was so atrocious and lacking in any redeeming qualities that it was an easy decision for the judges to make. Thank god Uli had immunity. I don't want her going anywhere.

Was it was right that Keith was kicked off the show and made a "laughingstock to all [his] friends"? Was Kayne right in being the one to swing the axe? And better still: where the hell is Runway's third permanent judge, Michael Kors? He appeared in the very first episode of the season and his seat has been filled by others since then. (Not that Vera Wang isn't a welcome addition.) To me, Kors' continued truancy is the real mystery of Project Runway... That and whether Bradley is really, really odd, or just really, really stoned all the time.

But that's a discussion for another day.

On tonight's repeat episode ("Barn Burner"), Earl makes up for burning down a barn as a child by building a pen for the Right Choice Ranch's new ostrich. Heh, ostrich.

On a repeat of The Office ("Valentine's Day"), Michael visits Dunder-Mifflin corporate headquarters in Manhattan and inadvertently blabs about his "relationship" with Jan to everyone there. (As if you thought he wouldn't.) But that elevator kiss between Michael and Jan? Priceless.

Two back-to-back episodes of this wacky 2004 British import, which purports to show a failed 1980s horror/sitcom set in a hospital. It's Kingdom Hospital meets... Little Britain. In tonight's first episode ("Hell Hath Fury"), the hospital chief is savagely beaten with a ladle and, while everyone's thoughts turn to an escaped mental patient, objects begin to move around of their own accord. (Spooky!) On tonight's second episode ("Skipper the Eye Child"), a long dead something from the past is reborn in the hospital. All this and "interviews" with series creator/star Garth Marenghi and producer/co-star Dean Learner. Hilarious.

Anonymous said…
Here's my dedication to this show. Somehow, and I am not naming names, someone in my household accidentally canceled my to-do recording of PR. By the time we got home at 10:45, it was too late to catch the rebroadcast (at 10). Luckily it was also on at 1am. So I got up at 7 this morning to watch. AND, I am wearing an INC shirt this morning (total coincidence - didn't notice till I put the shirt on)

I am SO happy he is gone. So happy. What an idiot. I loved Angela's outfit. I liked Bonnie, and honestly didn't dislike her outfit as much as I disliked Robert's.

Anonymous said…
I think Bradley is probably just stoned. When he makes those odd comments ("Maybe it's my beard. She doesn't like my beard."), he always looks on the verge of cracking up. He made me laugh out loud a few times last night. I'll definitely miss him when he is booted.
8/03/2006

Anonymous said…
I am glad that the "Angela" team won but definitely think it was due to the skills of Laura and Michael (who deserves more recognition). I loved all of the drama with Keith. He was actually a pretty good designer but major attitude.
8/03/2006