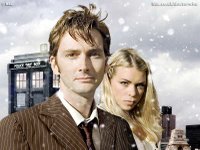 Ending weeks of speculation (and frustration), cabler Sci Fi has officially announced that it has picked up the second season of the new Doctor Who series and plans to launch the sophomore season next month.

The second season of Doctor Who, starring David Tennant (taking over the role from Christopher Eccleston) and Billie Piper, will premiere on September 28th with a two-hour episode, that will include the Doctor Who Christmas Special that introduced Tennant as the latest incarnation of the Doctor. (It had previously been rumored that Sci Fi would not be airing the special.)

The following week sees the premiere of Season Three of Battlestar Galactica and parent company NBC U is producing a one-hour recap special called Battlestar Galactica: The Story So Far, which will incorporate footage from the original mini-series and the first two seasons of the drama.

The recap special, narrated by cast member Mary McDonnell, will be made available on all of NBC U's platforms, including NBC (where West Coast viewers can catch the special this Sunday at 10 pm), USA, Bravo, Sleuth, Universal HD, and on SciFi.com's Pulse. It will also be made available via on demand beginning August 28th, as well as on iTunes and XBox Live, the first piece of content to be offered this way. Best Buy stores will also offer the special as a bonus DVD with the Battlestar Galactica Season 2.5 DVD set.