"If I Was Any Happier, I'd Need a Personal Assistant": The Searing Finale of "Hell's Kitchen" 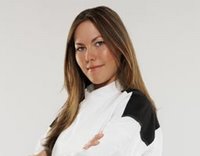 In life, there are many apt metaphors that relate both to food and losing. That's how the cookie crumbles... No use crying over spilt milk... If you can't stand the heat, get out of the -- Okay, viewers of FOX's Hell's Kitchen get that last one better than anyone, especially after last night's performance from Virginia and Co.

It was obvious from the start that Heather, even after a few gaffes, would make it to the final rounds but I am still stunned that her competitor for an executive chef gig at the "billion dollar" Red Rocks Casino in Las Vegas was the flirtatious Virginia. It came down to a battle of wills between sous chef Heather, my personal fave during the entire competition, and salad chef Virginia, whose gift-from-the-gods palate didn't quite match up to her weak kitchen skills or lack of leadership. You couldn't have chosen two more disparate individuals, as evidenced from the menus, decor, and attitude of their individual Hell's Kitchen "restaurants." (And if I ever have to see another chicken roulade, I think I'll scream. Quite loudly.)

Virginia's whole attitude was wrong. From her selection of kitchen workers (Keith? Tom? Giacomo?) to her opening remarks to them about them being "weak" (why on earth would you tell the people you're relying on that they're "weak"?) to her being bullied into agreeing to pay them each $1000 if she won. (Better not spend that dough, boys.) Virginia had first pick of the less-than-the-cream-of-the-crop crew and still ended up with hands-down the worst competitors in Hell's Kitchen. And sure enough, they failed her at every turn: Keith constantly eating instead of helping out; Tom cutting his finger and wandering around (too bewildered to have to work for a woman, apparently); Giacomo again as slow as molasses. To say that Virginia was hobbled to begin with would have been a compliment to their talents.

Heather on the other hand was cool and collected, told her team that they were exactly who she would have wanted there, and inspired them to work their butts off for her. There was no doubt in my mind that Rachel would do *anything* for Heather and that Sara would probably come around. Plus, she and Garrett worked well together and I am sure he was just pleased as punch that Keith didn't make it to the finals. (As for K-Grease, I was surprised that Gordon Ramsay seemed to bear him no ill will, even after the astounding slight he received last week. Surprising.)

While I was initially concerned that Heather would get flustered and start to make mistakes, she was remarkably level-headed and set out to fix any quality control issues while still getting orders out quickly and efficiently. Virginia, on the other hand, got so sidetracked with plating each dish individually herself, that orders began to back up on the hot plate and her team kept faltering. While Virginia might be blessed with a superlative palate, she's no chef and can't motivate or lead anyone in the kitchen. Her voice falters, her concentration breaks, and she just can't foster any confidence in her teammates. Poor Virginia is just so inarticulate that half the fun of the show has been waiting to see what comes out of Virginia's mouth next, whether they be amusing mixed metaphors or stream of consciousness non-sequiturs. I still can't help but chuckle at her baffling announcement, "If I was any happier, I'd need a personal assistant," uttered at the totally staged "press conference" to announce the finalists of Hell's Kitchen. (I especially loved how the only "journalist" to be introduced was the guy from the Fox Reality Channel. Pulitzer-winning moments, these.)

Once again, we were treated to that hokey "one of these keys opens up the door to your new restaurant" routine that was nauseating the first time round. (I had hoped that in a year, the producers had come up with a better reveal that was less on the nose.) It was only fitting that it was workhorse Heather's key that unlocked the opportunity to have her own restaurant (or at least serve as the exec chef in someone else's restaurant). But I was surprised that Gordon didn't offer one or both of them the opportunity to train in one of his many restaurants, like he did Michael, last year's winner. I think that, given the proper guidance, Heather will hopefully be a culinary force to be reckoned with and I hope that she uses this opportunity to push her career further.

As for me, my final thought on Hell's Kitchen is this: I've had the appetizer, so I'm hungry for my main course. Bring on Bravo's Top Chef 2 already... Then I might be so happy that, like Virginia, I might very well need a personal assistant.

The whimsical new sci-fi drama that's more Northern Exposure than Stargate. On tonight's episode ("Invincible"), Stark's obsession with the alien artifact hidden in Section 5 is intensified when a researcher is able to tap into its awesome power. Ohhhh, that can't be good.

The whimsical British romantic drama, starring Black Books' Tamsin Greig and Lois & Clark's Michael Landes and written by Jonathan Creek creator David Renwick, returns with another new installment tonight. In tonight's episode ("The Reflecting Pool"), Alice is forced to share a room with a gorgeous colleague whilst away at a conference, while Gil brings his latest flame, a former Hell's Angel biker, to a pool party in the country.

Jace Lacob said…
That's an excellent question as I miss "Spaced" terribly too! Unfortunately, BBC America hasn't yet announced any plans to air Season Two. :( But it's only a matter of time, I hope.
8/15/2006

Anonymous said…
Don't forget Virginia's other line when she told them she wanted he waiters to be like ghosts....um, ok.
Gordon's sign off last night was the best....especially with that little chuckle.
8/15/2006

Anonymous said…
After seeing "Top Chef," this season of "Hell's Kitchen" seemed somewhat underwhelming. While I adore Gordon Ramsay, I felt that there was little talent (aside from Heather) in the pool of contestants and it was hard to find anyone to root for. I'm glad that Heather won but think that "Top Chef's" Harold or Lee Anne would have kicked some serious butt in Ramsay's kitchen. I mean, space case Virginia in the the final two? Now that's true culinary hell.
8/15/2006

Brock said…
You should note that the "reporter" for FOX Reality Channel was none other than MARK, the MTV veteran of Road Rules season 1 and recent retiree from the endless Real World/Road Rules Challenge that he was both a cast member and host of (Battle of the Sexes 1).
8/16/2006