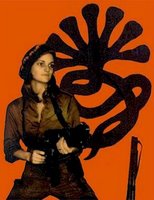 Call it a case of Stockholm, er, Neptune Syndrome.

Heiress and former kidnapping victim Patty Hearst (granddaughter of magnate William Randolph Hearst) is set to guest star in a November sweeps episode of Veronica Mars, portraying, coincidentally, the granddaughter of the founder of the show's fictional university, the conveniently named Hearst College, who vanishes the night before an important Board of Trustees vote regarding the school's future. No word on whether the Symbionese Liberation Army is involved in the heiress' disappearance this time...

Veronica Mars returns to the airwaves this fall on the CW with the premiere of Season Three scheduled for October 3rd. The episode featuring Patty Hearst is slated to air November 21st.

(Ten points to the first person who first correctly identifies the musical reference in this posts title. Starting... now.)

Tidmore said…
And it's genius like this that keeps bringing me back to VM week after week (although the beautiful Kristen Bell doesn't hurt a bit)
Can't wait for season 3 luckily I have the new Season 2 DVD to tide me over.
8/26/2006