Channel Surfing: Brian Austen Green Heads to "Hill," "Who" is Getting Married, Famke Janssen Returns to "Nip/Tuck," and More 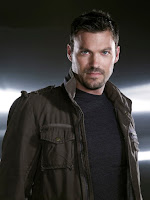 Entertainment Weekly's Michael Ausiello is reporting that Terminator: The Sarah Connor Chronicles' Brian Austen Green is said to be in "advance talks" to join the cast of the CW's One Tree Hill next season. Should the deal close, he'll be playing Clayton, a Jerry Maguire-esque sports agent representing Nathan (James Laferty) on Season Seven of One Tree Hill. "They're ironing out a few issues," an unnamed insider told Ausiello, "but it's pretty much a done deal." The Hollywood Reporter describes the character as "a brash sports agent who represents Nathan Scott's (James Lafferty) basketball interests and has become a close friend, ally, business partner and advisor to him while also enjoying the spoils that come from being a wealthy, handsome single guy." (Entertainment Weekly's Ausiello Files)

SPOILER! According to a report in Britain's paper The Sun, the final David Tennant Doctor Who special will feature three weddings, with Rose Tyler (Billie Piper), Martha Jones (Freema Agyeman), and Sarah Jane Smith (Elisabeth Sladen) all set to marry. According to unconfirmed reports, Rose would be wedding the half-human duplicate of the Doctor in a parallel universe and Martha would be marrying Rose's former sidekick Mickey Smith (Noel Clarke). As previously reported, Tennant will be dropping by spin-off The Sarah Jane Adventures on the eve of Sarah Jane's own wedding. True? Or just wishful thinking? Stay tuned. (The Sun)

Famke Janssen will return to FX drama Nip/Tuck for its seventh and final season. Series creator Ryan Murphy announced that Janssen would reprise her role as transsexual Ava Moore via the series' fan forum. "Just finished the last [Nip/Tuck] script today -- the 100th episode," wrote Murphy in a post to the forum. "The end. Very strange. But I thought I would confirm something here on the forum, since you've all been so great and loyal: Ava Moore (Famke!) returns for the final two episodes." Janssen was last seen on the series in Season Two. (Entertainment Weekly's Ausiello Files)

The Primetime Emmy Awards will shift one week earlier this year, to September 13th. The move comes after CBS announced that they will air an NFL doubleheader that afternoon, which could have affected the start time of the Emmys telecast. Instead, CBS opted not to take a chance and moved the Emmys one week earlier. (Variety's Award Central)

CBS Television Studios has signed a two-year overall deal with Carol Barbee (Jericho, Swingtown), under which she will remain on board as an executive producer/showrunner on CBS' upcoming medical drama Three Rivers. She also executive produced the CW drama The Beautiful Life but will be handing over showrunner reins on that drama to Mike Kelley. (Hollywood Reporter)

Disney Channel has ordered a fourth season of Hannah Montana and renewed Sonny With a Chance for a second season. Production on Season Four of Hannah Montana, which stars Miley Cyrus, is slated for early 2010. (Variety)

Discovery Channel has revived reality franchise Monster Garage and ordered a new Detroit-set series MG: Motor City, the pilot of which "will feature the team taking a Ford Model T and transforming it into a dragster." A deal for a host has yet to be closed. (Broadcasting & Cable)

Just days before the launch of Season Three of Burn Notice, cabler USA has promoted Alex Sepiol to VP of original scripted series programming. Sepiol, who reports to Jackie de Crinis, had overseen production on both Burn Notice and In Plain Sight. (Variety)

Broadcasting & Cable's Claire Atkinson talks with writer/executive producer Ray Romano about his new TNT dramedy Men of a Certain Age, which will launch in December. "We have more freedom with language and content, but there's not a lot of difference really," said Romano about the move to cable. "It's important to keep these guys as real as possible. There's a little less censorship, and you have fewer people with their hands in the mix, which is also good. It's similar except for my salary and the budgets. That's fine, though; I'm not doing it for the money. I don't want to tell them that." (Broadcasting & Cable)

Asta said…
I have to admit my 'Who' knowledge isn't as extensive as that of other series, but wasn't Martha engaged to a fellow doctor? And was someone inspired by 'Three Weddings and a Funeral'? Accept we'll be getting a regeneration instead of a funeral.
6/02/2009

Bella Spruce said…
I hope we do get to see Rose and the "half-human" Doctor again and that they finally get their happy ending!
6/02/2009

Erica said…
i have to disagree with bella. half-a-doctor was a cheap contrivance to give rose fans a feel-good happy ending, at the expense of plot. i will NOT be happy to see him again.
6/02/2009