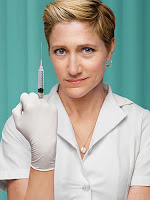 It's as simple as drawing blood.

Just a day after airing the season premiere of new comedy Nurse Jackie, pay cabler Showtime has renewed the Edie Falco-led series for a second season.

The news about the second season pickup of the series, produced by Lionsgate Television, was broken by TVWeek.com's Josef Adalian, who reported that "Jackie earned the best premiere ratings for any Showtime debut since 2004, when Nielsen changed the way it computed premium cable average. The Falco comedy attracted 1.35 million viewers in its two combined Monday runs, according to the ratings company."

In other words: wowsers.

If you couldn't tell from my glowing reviews of Nurse Jackie (and, oh, here), I'm already madly in love with this beautiful and hysterical series and am pleased as punch that Showtime would give the series such a ringing endorsement by picking it up for a second year so soon after launching it. Something very happily tells me we'll be hanging out with Jackie Peyton for many, many years to come.

AskRachel said…
That is so cool! I've had the opportunity to see the first few episodes and the show is incredible. I also think it has longevity which is why I'm thrilled that they've already locked in season 2. Smart move!
6/09/2009

ecrunner said…
I watched the show and after seeing it am not surprised to see that it already got a second season. There is a lot that can develop within two seasons and should make for an interesting look into a nurse's lifestyle.
6/10/2009