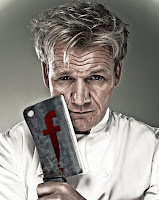 I'm a huge admirer of Gordon Ramsay's F Word, the kitchen-based series from the foul-mouthed Gordon Ramsay, who has become has much a reality TV staple here in the States as he is in the UK.

I'm even more pleased that BBC America, which will launch the fourth season of F Word tonight, is returning this provocative and compelling series to primetime, where it ought to be after stripping the third season weekdays in daytime. Unlike, say, Hell's Kitchen, which is really more about showmanship and contestant humiliation than, say, culinary matters, the emphasis here is firmly on food. After all, that's the f-word of the title.

I had the chance to watch the first three episodes of Season Four of F Word and was once again completely sucked into Ramsay's kitchen world. The fourth season of F Word finds the chef/author on a mission to transform people's beliefs that healthy food is boring food on its head and he once again creates a variety of dishes that anyone at home can prepare with ease in their own kitchens.

This year, the brigades are made up of family members, which brings just as much unity as it does conflict. (Look for Episode Two's Guru-Murthy family to be especially dangerous in the kitchen, resulting in multiple knife wounds and burns before the evening is over.) Will all 50 diners pay for starter, main course, and dessert? Or will Ramsay throw a tantrum when faced with unhappy customers?

And Ramsay will once again test his mettle against a weekly competitor who seeks to pit their homeground recipe--whether it be for Victorian sponge or Spanish-spiced meatballs--against that of uber-chef Gordon Ramsay. (Personally, I love this segment as it never fails to demonstrate how competitive Ramsay really is, even when bragging rights are the only prize to be won.)

Meanwhile, Janet Street-Porter hilariously attempts to raise two veal calves, nicknamed "David" and "Elton," on a Yorkshire farm and even turns to music and massage to produce tasty and cruelty-free meat to be served later this season in the F Word restaurant, Gordon takes his son Jack rabbit hunting and goes diving for sea urchin off the coast of Ireland, and I hear that one of my favorite foodie authors, Tom Parker-Bowles (yes, son of Camilla), will be turning up later this season in a series of segments in which he visits Sardinia in search of various delicacies.

All in all, this outing of Gordon Ramsay's F Word is a perfect hour of food-focused television, offering a tantalizing blend of celebrity interviews, how-to cooking techniques, amateur competition, travelogue, food journalism, issue-related crusading, and more food. Everything, that is except the bloody kitchen sink. Any foodie worth his salt will want to be tuning in.