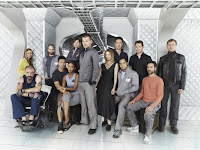 "I'm alive/And I'm alone/And I've never wanted to be either of those." - Chemical Brothers

It's rare that a network ever airs a pilot that it doesn't intend to order to series, much less one that has engendered quite so much support from viewers ahead of its broadcast.

And yet that's just what FOX is doing tonight with the gripping and sensational two-hour pilot for sci-fi drama Virtuality, from creators Ronald D. Moore and Michael Taylor of Battlestar Galactica fame. (You can find an exclusive interview with Michael Taylor here and a write-up of a press call with Ron Moore here.)

Virtuality, gorgeously directed by Peter Berg (Friday Night Lights) is a mind-bending, acid-trip exploration of deepest space and the innermost recesses of the human heart. Deftly combining space-set action with reality television, Virtuality seeks to answer some eternal questions about the nature of reality itself. What is real? What's fantasy? And what happens when we're able to smudge the lines between the two?

The crew of interstellar craft Phaeton is toeing that very line. We meet the motley inhabitants of this metal tube as they approach a major turning point on their ten-year journey to a distant star. Via the reality-show-within-a-show Edge of Never that documents their every move, we're told that their journey of exploration to investigate the possibility of life has become a journey of survival as back on Earth, environmental conditions have deteriorated to the point that the planet will be uninhabitable within a century. This news reaches them just as they arrive at the go/no-go point: the last chance they have to reevaluate their course. Will they turn around and come home? Or, armed with this information, will they continue on a ten-year round-trip journey to Epsilon Eridani and back?

In his play "No Exit," Jean-Paul Sartre posited that hell is other people. Imagine then the hell of being trapped on a space ship with just eleven other people for a decade. Fortunately, the crew of the Phaeton has an escape route of sorts, their virtual reality modules which allow them to step outside the mundane drudgery of their existence and experience, well, anything that they can dream up. Some choose to use this for extreme sports, some for relaxation, others as war games, but some discover that they can use these modules to explore their innermost dreams and fears.

Commander Frank Pike (Nikolaj Coster-Waldau) uses his module to play Civil War-era war games. That is, when he's not conducting a virtual affair with microbiologist Rika Goddard (Sienna Guillory), who just happens to be married to the reality show producer/psych officer Dr. Roger Fallon (James D'Arcy). Pilot Sue Parsons (Clea Duvall) escapes the darkness of space for the surf or a bike ride down the side of tree-lined mountain road. Wheelchair-bound second-in-command Dr. Jimmy Johnson uses it to experience ice-climbing and, well, walking. Meek computer scientist Billie Kashmiri (Kerry Bishe) is a rock star/Alias-style superspy. Others still use it as means to come to terms with some hard truths, such as Dr. Jules Braun (Erik Jensen) and Alice Thibadeau (Joy Bryant); the modules offer them the facade of being able to change their circumstances, to erase the past and start again, to achieve the things that life prevented them from holding on to.

But all is not well in outer space.

Besides that one of their number--crew physician Dr. Adin Meyer (Omar Metwally)--has been diagnosed with Parkinson's Disease, there's paranoia brewing among the crew that the information they are being fed from mission control may not be totally true. And there are other pressing issues, such as that affecting their precious virtual reality modules. What appears at first to be a computer glitch is wrecking havoc on their virtual lives, introducing a seemingly autonomous and free-willed character (Jimmi Simpson) into these fictional worlds. Even more troubling is that this green-eyed man seems hell-bent on killing them all, going so far as to rape one them during a virtual session.

What follows is both a taut thriller and a philosophical potboiler as the crew debates whether or not to shut down the virtual modules and whether what happens in these fictional realities qualifies as "real." It's a canny means for Moore and Taylor to explore the fragile definitions we have for reality and each of the characters has a motivation for either wanting to believe or not that their virtual lives are just as real as the ones they experience in the so-called waking world.

The questions that Virtuality asks are ones that affect each and every one of us, who filter our perceptions of the reality of our own world through the prism of the endless streams of cable news networks, so-called reality television series, and our own fallibility. Is shooting someone in a video game actually murder? If you sleep with someone other than your spouse in a dream, has an affair been consummated? The answer is that our realities are so malleable that it's hard to separate physical truth from emotional truth.

These would be merely intriguing themes if they weren't brought to life so skillfully by Virtuality's superlative cast, from Coster-Waldau's epiphany-receiving Commander Pike, D'Arcy's arrogant Roger Fallon, and Duvall's embitted Sue Parsons (who herself conceals a secret to unlocking her brusque demeanor) to supporting characters like Jose Pablo Cantillo and Gene Harber's sparring gay couple Manny and Val and Nelson Lee and Joy Bryant's romantic couple Kenji Yamamoto and Alice Thibadeau. Each member of the cast gets an opportunity to shine brightly in the two-hour pilot and a slew of compelling subplots emerges for each of them.

The jaw-dropping and beautiful direction, by Peter Berg, also has to be commended. There's an awe-inducing scene, in which the crew of the Phaeton engages in a slingshot maneuver, that's set to the Chemical Brothers' haunting song "Alive Alone" (featuring vocals by Beth Orton) that needs to be seen to be believed. It rivals--if not tops-- many of the most cinematic sequences in today's feature films and imbues the action with an innate humanity and passion. (Confession: I watched it five times as I was so completely sucked into the beauty of the scene.)

True, Virtuality isn't flawless. There are some niggling points that stick out when watching the pilot, such as why Roger Fallon, the psych officer on an interstellar crew, would also be a producer of a reality television show with a stake in the series' profitability in lieu of a producer who didn't also have to care for the psychological well-being of the crew of a multi-billion dollar mission for survival. Additionally, it still bothers me why the argument between the crew was whether the VR modules needed to be shut down completely or left the way they are (even with murder and rape occurring against the users' will), rather than someone--like computer genius Billie--also exploring a possible on-site software fix in the meantime.

But these are minor complaints when faced with the sheer pleasure of watching something truly innovative and unique unfold on screen. Virtuality's two-hour pilot gives us a glimpse into a series that might have been. What we see through the looking glass then is a gripping series that's not afraid to ask hard questions, to play with our perceptions, and to challenge its characters--and its audience--to take a leap of faith.

The final five minutes or so set up what looked to be a darkly compelling journey of self-discovery and darkly spellbinding drama. Even if this groundbreaking series doesn't continue past this airing, the trip down the rabbit hole--no matter how brief--is definitely worth it. So do yourself a favor and plug into the riveting Virtuality tonight.

Riley said…
Thanks for the great recommendation and review. I'll definitely be checking this out even if there won't be anymore episodes to follow.
6/26/2009

@Jace: Do you think that it's worth it to invest the two hours even though Fox isn't going to order it? It looks amazing but I don't want to get invested in something that's going to go nowhere.
6/26/2009

annie said…
Just went and downloaded Alive Alone from iTunes. Can't wait for this tonight! Thanks for the great review, Jace!
6/26/2009

Tempest said…
Just finished watching it . . . Wow. I would LOVE to see where they would go with this in a series. What sacrifices do we need to make to which tv gods to get this to happen?
6/26/2009

segue said…
Der... I missed the end. I swear, I looked away for a minute, and suddenly the news was on!