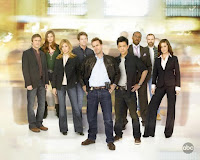 Producers of ABC's upcoming sci-fi series Flash Forward say that the series will offer a complete plot in its first season and will reveal answers in the first season finale. "We know exactly ... what season one is, with great specificity, because at ... the outset, we had to plan the entire season," showrunner/executive producer Marc Guggenheim told SCI FI Wire. "The first season ends with our characters' catching up to their futures. So you can't do that on the fly. I mean, I suppose you could, but I don't think it would be a very satisfying viewing experience for anybody. We made the commitment at the outset [to] plan out the entire first season before we start breaking episode two. So the very first thing we did, apart from ... figuring out character backstories and [all] that—when the time came ... to actually start breaking story, it was, 'OK, how are we going to move the characters from where they are in episode one to where they are at the end of the season?'" (SCI FI Wire)

Lost's Matthew Fox says that there won't be any spin-off series emanating from ABC's Lost once the series wraps its run next year. "I think the show will end in a way that there really cannot be any future of Lost," said Fox, shooting down dubious reports of a spin-off series. "I don't think the word Lost will come up at the end of the last [episode]. That's how much finality it will have. Unlike any other episode ever done on Lost, I think it will just go to black and that will be it." (Digital Spy)

Total Sci-Fi is reporting that UK broadcaster ITV has canceled sci-fi drama Primeval and won't be recommissioning it for a fourth season, despite ending the third season on a cliffhanger. "Obviously we're devastated that things should end this way with ITV," said an unnamed source close to the production. "But we're absolutely certain that although this stage of its evolution seems to be over, Primeval isn't dead. We're very proud of what we've achieved over the past three years and we have every intention of keeping Primeval alive in other ways." Those ways may include a possible US series or a feature film from Warner Bros. US fans may want to skip the spoiler-laden third paragraph, which contains spoilers for the third season finale. (Total Sci-Fi)

CBS has ordered three more installments of I Get That a Lot, a hidden-camera special in which celebrities work undercover at various run-of-the-mill jobs. The celebrities participating in the next batch of specials, from LMNO Entertainment and Magic Molehill, have yet to be named. (Variety)

TV Guide Channel is making some significant changes, beginning with the pink-slipping of 38 employees and programming downgrades. Weekly talk show TV Watercooler will be canceled as of June 22nd, while Hollywood 411, a daily entertainment news magazine, will become a weekly series and weekly series Infanity will become a series of specials. (Hollywood Reporter)

VH1 has given a series order to an untitled reality series which will focus on people afflicted with obsessive compulsive disorder. The series, from 3 Ball Prods. and executive producers JD Roth, Todd Nelson, Adam Greener, Matt Assmus, Jeff Olde, Jill Holmes, Alex Demyaneko, and Noah Pollack, will focus a group of OCD sufferers as they live together at a treatment facility and participate in group and solo treatment. (Variety)

Jon88 said…
Re Primeval: "US fans may want to skip the spoiler-laden third paragraph, which contains spoilers for the third season finale." Similarly, avoid Wikipedia's page, as I painfully learned yesterday.
6/15/2009

Asta said…
I wonder what Primeval's cancellation means for Law & Order: UK? Like Primeval, L&O:UK's ratings were considered pretty good, yet there has been no word on a second series or third series if you consider the first season split two series. I know ITV's financial situation is about as bad as it can get, but if they keep canceling their popular and successful series, what's left? While I'm not a Primeval fan, considering it runs on both SciFI and BBC America I assumed the series was a financial bright spot for ITV and would be running for awhile longer.
6/15/2009

wooster182 said…
Is Matt Fox saying just a little too much? I don't know, but I don't want to know that it's going to go straight to black. I want my options open so I'm completely surprised.
6/15/2009

Rufus said…
Were there really rumors of a Lost spin-off? I think that, if they do the job right and provide a satisfying ending then that should be it. No spin-offs, etc. The show has been so tightly planned (for the most part) that I think anything else would just seem watered down.
6/15/2009

Tempest said…
I never heard anything serious about a "Lost" spin-off. It is fun to come up with ideas . . . I would love to watch "The Ben and Locke Show."

kat said…
I just removed Primeval from my series recording. I found that I was forcing myself to watch and not really enjoying the show.
6/17/2009