Pilot Inspektor: An Advance Review of ABC's "The Middle" 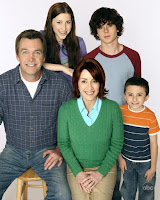 My favorite thing about ABC's new comedy series The Middle might just be youngest son Brick, played with unapologetic realness by Atticus Shaffer.

I had the opportunity a few weeks back to watch the full pilot episode of The Middle, which launches on ABC this fall on Wednesday evenings, and was instantly enchanted by Shaffer's adorably awkward Brick, a boy who continually refers to his mother as his "hero" (but not quite for the reasons you might think), who whispers to himself because it makes him feel good, and who embodies all the bizarre quirks and foibles that many of us carried around for a bit in childhood.

Created by Eileen Heisler and DeAnn Heline of NBC's Lipstick Jungle, The Middle tells the story of the Hecks, a very average middle-class family living in Middle America... or the middle of Indiana to be precise. If I'm being honest I'll say that I've been more or less in love with this winsome script for the past few years; the project itself has been developed several times over and was even shot as a pilot with Ricki Lake two development seasons ago. (The aforementioned Shaffer is the only cast holdover.)

Now the series stars Patricia Heaton (Back to You) as the oft-put-upon Frankie Heck, a suburban wife and mother who tries to keep her kids and husband in line and keep chaos at bay while she works as a (rather unsuccessful) car salesman. Her husband Mike (Scrubs' Neil Flynn) is the manager of a local quarry and approaches the workplace-related injuries with the same lackadaisical manner one might address a child's skinned knee. Eldest son Alex (Frozen River's Charlie McDermott) is a typically sullen teenage boy, one with a penchant for walking around in his boxers and nothing else. Middle child Sue (Eden Sher), meanwhile, doesn't seem to have any noticeable talents but that hasn't stopped her from trying out for a variety of school teams and clubs with painfully expected results. (Her pummel horse jump is a master class in gut-wrenching embarrassment.) And then there's the adorably bizarre Brick whose ticks are endearingly off-putting. ("Sorry...")

They're the type of family who considers quality time eating dinner and begrudgingly catching each other up on their days during the commercial breaks on Dancing with the Stars. In other words, the Hecks are just like a zillion other American families, albeit with some more fully realized neuroses.

If the above sounds a bit like FOX's own family comedy Malcolm in the Middle, you'd be right. Both The Middle and Malcolm in the Middle (which even sound alike) dealt with the everyday messiness of family life with a heightened sense of reality that made our own days seem relatively normal in comparison.

Like the family preserved for eternity on Malcolm in the Middle, the Hecks have a mother struggling to keep things together, a father whose parenting style can be described kindly as laissez-faire, a troubled older son, and a oddball younger son. (Just sub the brainiac Malcolm for a skills-deficient Sue and change the POV from the middle kid to the harried mother and you're set.)

Which doesn't diminish the charms of The Middle at all. As I mentioned before Shaffer absolutely kills as Brick, who springs it on his poor, overworked mother that she will have to create a superhero costume and turn up at his school for a book report... the day before she's meant to be there. (Hint: it's why he kept whispering that Frankie was his "hero.") Frankie, meanwhile, contends with a ghastly driver's license picture that makes her seem haggard (she colors her grey hair with a black magic marker as a result) and a host of problems from each of her kids. Sue lands a spot in show choir... with some added painfulness this time around.

I'm not a huge fan of Patricia Heaton in general, which is a real shame as Frankie Heck is a fantastic female character. Heaton seems nearly manic with her performance and it's jarring at times with the messy sweetness of the overall pilot and I wanted her to calm down a little more from the outset, even if Frankie is a mess internally. Flynn is as fantastically nuanced as ever and the kids are all well-cast.

But the standout performance really is the inimitable Atticus Shaffer, who gives The Middle much of its zing and freshness. Rarely has there been a television kid with such perfect timing (watch the scene where he shills a car for his mother's potential sale) and such oddness in one package.

Ultimately, The Middle is a cute and rather sweet half-hour about the trials and tribulations of the average American family in an age of bad credit, massive unemployment, and energy-sapping technological development. It's also about how even in the most mundane of situations, there's humor, joy, and love to be found in just about every home.

The Middle will air Wednesdays at 8:30 pm ET/PT this fall on ABC.

Greer said…
I saw the original pilot for this with Ricki Lake and thought it was pretty cute. The little kid is fantastically bizarre and I'm really glad they kept that actor. And I'm happy that they brought Neil Flynn in as the dad. I'm not a big Patricia Heaton fan but will reserve judgment until seeing her in the role.
6/02/2009

Unknown said…
Totally agree about little Atticus. My coworker and I have been whispering "Sorry" to each other at least twice a day since we watched the pilot. So great.
6/02/2009

Ally said…
I thought this pilot was too derivative of both Malcolm and others, and my dislike of PH will most likely keep me away. however, I do agree about Atticus. That whispering thing was cracking me up. It was used just right.
6/04/2009

Mich said…
I have seen 2 episodes and find the show hilarious. I think PH is actually doing a great job- I like her portrayal of Frankie much better than her portrayal of Deborah in ELR. The casting of all the characters is superb and I found myself laughing out loud over and over again. Kudos to Flynn on his portrayal of Mike- reminds me of many fathers I know. I hope ABC picks up this series.
10/08/2009

Anonymous said…
I have seen them all so far and think that all the parts seems to be cast perfectly. I too think the youngest steals the show and I also enjoy Heaton's frantic but in charge take on her character. Those here they have ripped on her I do not understand as she was an emmy winner for ELR. Why the hatred of her? is is political?
10/22/2009