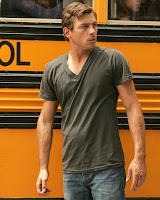 Skeet Ulrich (Jericho) has signed on for a multiple-episode story arc on CBS' CSI: NY, where he will play a deeply disturbed killer in three episodes of the procedural crime drama. His first appearance is slated to air October 7th. (TVGuide.com)

Louis C.K. (Lucky Louie) will appear on NBC's Parks and Recreation next season in a multiple-episode story arc in which he'll play a police officer in Pawnee who is a potential love interest for Amy Poehler's Leslie Knope. He'll first appear in the second episode of the series' sophomore season, though it's unclear how many installments he'll ultimately appear in. (Variety)

Paris Hilton will guest star in an upcoming episode of the CW's Supernatural, where she will play "the role of a demonic creature that takes the form of... Paris Hilton," according to executive producer Sera Gamble, who sheds some light on the supernatural goings-on to The Chicago Tribune's Maureen Ryan. "If you know our style, you know we go pretty funny and irreverent with this stuff, so--expect that," added Sera. "The fact that she wanted to do the episode speaks volumes about her sense of humor. She's flat-out awesome for playing along. You'll see." Creator Eric Kripke meanwhile, teased, "If anyone ever wanted to see a bloodthirsty Paris attack and kill somebody, this is your chance." Hilton will appear in next season's fifth episode. (Chicago Tribune's The Watcher)

Syfy is reteaming with director/executive producer Bryan Singer to develop an untitled six-hour limited series about the Mayan prediction for the end of the world. Project, which will be executive produced by Singer and Keith Addis, will be written by Michael Petroni (Dangerous Lives of Altar Boys) and Michael Bond (Passengers). Here's the official description from Syfy PR: "The project will be a thrilling action-adventure story blending scientific fact and myth with popular conspiracy theories centering on the Mayan Calendar and what it predicts for mankind at its end date. With a feel of DaVinci Code and National Treasure, it tells the story of a down-on-his-luck author/professor who goes on a worldwide adventure to uncover the mysteries surrounding the Mayan Calendar and the potential apocalypse it seems to have predicted centuries ago. With an unlikely team, he races against time to prevent global catastrophe, and in doing so, ultimately rediscovers his faith in humanity and himself." (via press release)

HBO is developing single-camera comedy Enlightened about a self-destructive woman who has a spiritual awakening and then sets out to lead a more enlightened life, creating a trail of destruction in her wake. Project, written by Mike White (School of Rock), will star Laura Dern (Recount). "There are so many dysfunctional types of characters populating cable television, and she is equally as dysfunctional as any of them," said White, "but her impulse is to get healthy, to make the world a better place even though it creates havoc." (Hollywood Reporter)

USA announced a slew of in-development programming yesterday at the Television Critics Association in Pasadena, including:

NBC has announced that comedians D.L. Hughley, Mikey Day, Rachael Harris, Jim Norton, and The Dan Band have signed on to serve as correspondents for Jay Leno's eponymous weeknight series, along with NBC Nightly News anchor Brian Williams, who will also make appearances. (via press release)

Warner Bros. Television has founded a global unit that will offer localized versions of their originated series--both on the scripted and unscripted sides--to territories around the world. Ronald Goes has been hired as EVP and head of international production; he'll be based in the UK and will report to Jeffrey Schlesinger. Concept is not a new one; 20th Century Fox Television has had a similar strategy in place for roughly a year now while NBC Universal has successfully formatted some of its series, most notably Law & Order, in the UK, France, and Russia. (Variety)

The Daily Show's John Oliver and Rory Albanese have signed a blind script deal with Paramount, under which they will create new feature film projects for the Paramount and television projects for CBS Television Studios. The duo will also be creating a production shingle. (Hollywood Reporter)

Pay cabler Epix has signed a movie output deal with Samuel Goldwyn Co. on all of its platforms for up to twenty of Goldwyn's feature films to be released in 2010 and 2011. Epix, backed by MGM, Viacom, and Lionsgate, will launch in October. (Variety)

Radha said…
Very excited to see what Mike White has up his sleeve. I think the combination of his talent, Laura Dern's talent, and HBO will produce some great results!
8/06/2009