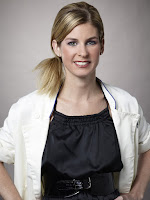 Those of you who have been watching Bravo's addictive and appetite-inducing culinary competition series Top Chef: Las Vegas have undoubtedly discovered the dazzling skill, graceful presentation, and exquisite flavor profiles of 33-year-old Philadelphia native Jennifer Carroll.

Carroll, who wowed the judges in the first week of the competition with a clam ceviche and a poached halibut dish, is the chef de cuisine at 10 Arts by Eric Ripert in Philadelphia. When I first saw an early cut of the season opener, I quickly put her down as a major contender for the title of Top Chef and was impressed by her creativity, her passion, and her unwavering determination.

I caught up with Carroll earlier this week to talk to her about her career, her culinary style, what it's really like in the kitchen on Top Chef, that pastry chef comment (you know which one I'm talking about), and much more.

Televisionary: How would you define your culinary style?

Jennifer Carroll: My style is to definitely make the fish or the protein of the plate the star and anything that goes around it has to elevate it. I don't want anything to be out of harmony with each other. My style is very simple and clean and delicate. But it is also at the same time full of flavor.

Televisionary: What drew you to participating in Top Chef?

Carroll: At first, I was very nervous and a little apprehensive about doing it. But all of the PR and seeing what all of the contestants and winners in the past have done through the show and how great their lives were after, it was definitely a huge influence over me to doing it. And just getting my name out there and having people see what I can do in the kitchen.

Televisionary: Was the competition aspect of the show then more or less difficult than you thought it would be?

Carroll: I knew it was going to hard but once I met all of the other chefs and found out where they were from, I was like, "Ohhhh man, I might be in trouble here." It was definitely harder than I thought it would be.

Televisionary: And how familiar were you with Top Chef ahead of time?

Carroll: I've watched every season. Definitely knew the pressure and stress and was really worried about all of the time elements and just really not having any idea of what I'm walking into every day. I thought it would be fun... but it was definitely stressful!

Televisionary: Obviously, working in the kitchen is stressful enough but when you add in that time element and the cameras, how much more intense does it get?

You're in a brand-new kitchen with brand-new pots and pans, around people you don't know. I don't have anyone to go tell to peel garlic and shallots. (Laughs) You have to do everything yourself and you're being watched by cameras. It's just even more nerve-wracking because if I screw this up or I drop this or if I cut this not perfectly, the camera and the whole world is going to see it. It's definitely added pressure.

Televisionary: In the season opener, there was a vaguely misogynistic comment in which one contestant asked if you were Eric Ripert's pastry chef. Did this get under your skin at all?

Carroll: You know... I try not to let things like that bother me. I've been working in the kitchen long enough where I'm used to those kind of comments. I was kind of surprised and taken aback, thinking that we're all professionals here, so why do you have to assume that I'm the pastry chef? But it just goes to show that in the world today, people still think that if you are a girl and you work in the kitchen that you are the pastry chef and that's just so stupid to me.

Televisionary: Do you think that male chefs are threatened by strong women in the kitchen?

Carroll: I think some are. And the ones that are I think are insecure.

Televisionary: What's the one thing that people watching at home don't realize about the competition?

Televisionary: Your background was initially in law. How and why did you make the switch to the culinary world?

Carroll: I actually didn't get to law school. I was pre-law. I always worked in kitchens and always loved to cook but always cooked for my friends and was always with my grandmom and my mom. And, I don't know, something slipped in me one summer and I told my parents that I didn't want to go back to college for pre-law, that I truly wanted to go to culinary school.

I was sitting in my house one day and a switch just flipped and I realized that this was what I wanted to do. I'm so glad that I made the change because I have fun every day at my job. It's stressful and it's hard and it's long hours, but it's fun and it's creative. At the end of a long, hard day, you feel good; you feel good about feeding people and making memories for them. That means so much more to me and I'm glad that I took this path.

Televisionary: Who then are your culinary influences or heroes?

Carroll: I would definitely have to say that my main culinary influence and mentor would be Eric Ripert. He taught me so much while I was up at Le Bernardin with him. And also the sous chef and the chef de cuisine there: Chris Muller and Eric Gestel, who are like the unsung heroes of Le Bernardin who are there on top of you every single day, making you better. They really formed me and molded me into the chef I am today.

Televisionary: If you had a signature dish that best represents you as a chef, what would it be?

Carroll: That's such a hard question. (Laughs) I think all chefs hate that question because it's so limiting, I think. I think it all depends on what your mood is that day. It would have to be simple and clean and fun and something definitely with seafood because I love cooking with it so much.

Televisionary: Do you cook at home for family or friends in your off-hours?

Carroll: I do like cooking at home. When ever I go to my mom's and she's making dinner or my sisters' and they're making dinner, I can't sit back, I have to go in the kitchen and usually they'll yell at me, "Hey, relax, no cooking for you." But I just can't help myself. What do I like to cook? It depends. (Laughs) Whatever anyone wants to eat that day. I like cooking everything.

Televisionary: What ingredients or kitchen gadgets could you not live without?

Carroll: What could I not live without? Definitely would be my chef's knife [by Misono] and my sauce spoon. I've had my sauce spoon for -- Christ, for almost eight years now. Literally, if I lost it, I'd be so upset.

And then ingredient-wise? Of course fine sea salt, a very high-fat butter, unsalted butter that would be, a very good olive oil, Espelette pepper, and basically whatever best seasonal product is in the stores.

Televisionary: If you are the winner of Top Chef, what would you do with the cash prize?

Carroll: Number One, I would definitely give some back to the community. Right now, we're selling buttons that say "Bet on Jenny" in the restaurant and 100 percent of the proceeds are going towards Philabundance, which is a local food charity. I would definitely give to the local food banks in Philadelphia, which would be one of the main things I would do with it. And then the rest? Who knows. Something to create my restaurant with some day.

Cassandra said…
Thanks for the great interview. After just the first episode it was obvious that she has major skills and I'm really excited to see what she'll do during the competition!
8/28/2009

AskRachel said…
I couldn't believe that pasty chef comment. I forgot which guy said it but, after spending some time in the kitchen with the extremely talented Jennifer, I hope he feels like an idiot.
8/28/2009