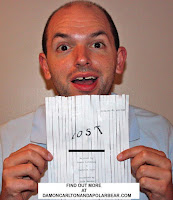 If you've been following me on Twitter, you know that I've been sucked into ABC's latest viral campaign for Lost without even being aware of it.

Let me rewind: I attended the Lost panel at San Diego Comic-Con, where comedian Paul Scheer presented showrunners Damon Lindelof and Carlton Cuse with a black velvet painting of Damon and Carlton with one of the series' trademark polar bears. It was a funny and disarming exchange in which Scheer said that he would be producing all sorts of Lost-related black velvet artwork this summer. (The clip can be viewed here.)

Returning to Los Angeles, I was contacted by an art dealer on behalf of Paul Scheer, who said that he wanted to give me a reproduction of one of Scheer's pieces as a gift. I gladly accepted and soon thereafter received a limited edition giclee reproduction of "Damon, Carlton, and a Polar Bear," numbered 5/30, along with an extremely verbose hand-written note from Paul Scheer himself in which he referred to himself as "the Picasso of Pop Culture" and which contained a slew of Lost-related quotes.

Last week, I received a package via Fed-Ex which contained a cease-and-desist letter from Ronie Midfew Arts stating that Scheer had created these works "without their authorization" and that they can "in no way condone the way Mr. Scheer has appropriated these key creative elements of the show."

To that end, they have been contacting the recipients of Scheer's largesse to ensure that no further copies of the print are made: "Our firm understands that you have the print, and whatever happened, happened." (Ahem.)

The letter, dated August 4, 2009 (yes, those numbers should jump out at you), which also makes special note of Scheer's intended action on August 15th (and, yes, there's 8/15), is signed Alexandra Miller, assistant to Ronie Midfew.

Ronie Midfew Arts has a website, which can be found here. It contains the mysterious phrase "15 Will be lost The 16th Will be found" as well as a variation on the letter I received in which they state that as we near Scheer's intended sale of his Lost-inspired pieces on August 15th, "This will not happen."

Rodie Midfew Arts is, of course, an anagram of Widmore Fine Arts, which itself has a website, found here. The site, which represents a gallery in Great Russell Street in London backed by Charles Widmore, claims to be written by Widmore's nephew, Owen W. (I think we can assume his full name is Owen Widmore.) The gallery is slated to open in mid-August, which--wouldn't you know it--is when Scheer is meant to be selling his own work. Coincidence?

The gallery itself claims to be down the street from the real-life art gallery Austin/Desmond Fine Art... which just happens to have names of two Lost characters embedded within.

The latest chapter of this story came when Scheer discovered that Lindelof and Cuse had thrown out his Comic-Con present and he threatened to show up at the production offices to confront them for throwing out his gift, which he believes could be as a result of the Ronie Midfew Letter.

Yesterday, Scheer posted the following viral video to YouTube and Damon, Carlton, and a Polar Bear:

After narrowly missing both Lindelof and Cuse (best bit: Lindelof on the phone saying, "I don't care what his motivation is, just make him dead!"), Scheer discovers the production office dumpster containing a single rose, a set design page for an elevated temple, and a shredded script title page for the Lost season premiere, written by Damon Lindelof and Carlton Cuse and directed by Jack Bender.

Yes, that space is deliberate. It's meant to evoke the Los Angeles International Airport, or LAX in vernacular, but with a twist. Typically X refers to a variable or an unknown, which means that the title could refer to an unknown Los Angeles, one in which Oceanic Flight 815 did in fact land safely after taking off in Sydney.

(And, yes, my usage of the word "variable" is very apparent, given Lost's use of constants and variables over the course of the last five seasons.)

Which would mean that the viral videos shown at the Lost panel in San Diego--depicting Mr. Cluck's spokesperson Hugo Reyes and still-on-the-lam convict Kate Austen--are potentially demonstrating the alternative reality forged when The Incident occurred.

The CineManiac said…
LA X...
That is a very interesting title. Do you think maybe the plane finally lands in LAX?
Of course the problem with the bomb going off and solving everything means they land in LA.Which means they don't set off the bomb, which means they crash on the island, but then they set off the bomb so they land in la, whichmeanstheydontsetoffthebombwhichmeanstheycrashontheislandbutthentheysetoffthebombsothelandinla....
And we have a pair of ducks(or maybe it's paradox?)
But I have faith in the Lost crew that they know what they're doing.
8/11/2009

rockauteur said…
That's a cool story... Were you scared when you got the cease and desist or did you realize something was up immediately?
8/12/2009

Anonymous said…
I love that Pop Candy is only now getting around to writing about this. A week late.

Thanks for keeping us Lost fans informed Jace and BEFORE everyone else.
8/17/2009

Um, me fuzzy brain dimly recalls an episode where they explain alternate timelines splitting off. Seems like in that way the altered timeline can't loop back around onto itself - it's a different reality altogether.
11/04/2009