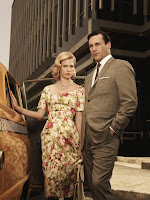 Ladies and gentlemen, start your TiVos.

Just a few reminders about some television this weekend that you should be sure to check out, come hell or high water.

The third season of Mad Men kicks off on Sunday night at 10 pm ET/PT on AMC. Fans of the period drama are in for a real treat as one of the very best programs on television returns for a triumphant third season that kicks off with a hell of a bang. (You can read my advance review of the Mad Men season opener here.)

Also on Sunday evening, is a brand-new episode ("I Will Rise Up") of HBO's supernatural soap True Blood, which transforms the series from being merely slickly seductive into something profound and gut-wrenching. If there's such a thing as one must-see episode of True Blood (and really, aren't they all are worth watching?), this is the one. You've been warned: miss this one at your peril. (You can read my spoiler-free review of Sunday night's True Blood here.)

And, finally, there's a heartbreaking new installment of BBC America's haunting Being Human on Saturday night that is a complete game-changer for the supernatural drama series. I had the opportunity to watch it a few weeks back and was mesmerized by how far the writers took the characters to their breaking points in this installment, in which Mitchell and George are forced to face the derision and rage of the human community over a misunderstanding which turns into a harrowing reminder of their true natures.

What are you most looking forward to watching this weekend? Discuss.