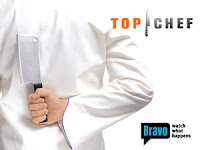 While you sadly won't get to see the Quickfire on television (aw!), it was an absolute treat to get to have lunch with Padma Lakshmi, Gail Simmons, and my fellow television critic guest judges and then deliberate about which of the two dishes ruled supreme. (And believe me, get a group of foodies and critics together and it's rather tricky to come to unanimous decision.)

But I'm getting ahead of myself. The Quickfire Challenge brought together two teams of Top Chef contestants. On the one side: Team Old School, consisting of Fabio Viviani, Antonia Lofaso, and Ryan Scott. Staring them down from the other side of the stage: the newbies from Top Chef: Las Vegas: Ashley Merriman, Michael Isabella, and Mattin Noblia.

So how did they do? And which dish did we end up selecting as the winner? Let's discuss.

The challenge facing these crack chefs: to prepare the best dish possible within a twenty-minute time limit. No easy feat, given that they'd have to work together under tight time constraints and in front of a live audience in a less-than-ideal setting (it wasn't exactly set in a kitchen).

So what did the teams offer up? 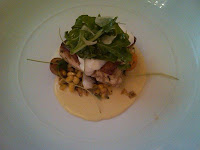 Team Old School served up a seared halibut with a corn, onion, and crab succotash, and wispy, ethereal fennel fronds. It was absolutely delicious: the fish was perfectly cooked with a crisp bite on the outside and a moist interior that was flaky and sweet.

The sweetness of the corn and little heirloom cherry tomatoes were nicely balanced by the slight acidity of the creamy slash of sauce on the plate. We all decided that this was a dish that we could eat just about every day: it was sweet, savory, and fulfilling in the best sense of the word. I did feel, however, that the fish could have used a little hit of acidity, perhaps from some fresh lemon juice squeezed on at the last second. 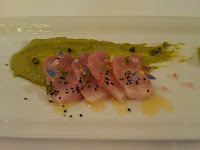 As for the new chefs, they were eager to prove their superiority to their forebears on Top Chef. They offered up a gorgeously composed plate of coral-pink hamachi crudo served atop a puree of pistachio and preserved lemon. The crudo was topped with borage, pickled radish, and nigella (black onion) seeds.

I was at a loss for words: it was such a beautifully balanced and remarkable dish that the only word for it was transcendent. The hamachi was so deftly cut that it was positively, angelically smooth, offering up a sweet lusciousness. The slight spiciness of the borage leaves were complimented by a saline hit from some coarse Maldon salt and the crunch of the nigella seeds. And the puree? Exquisite; a nutty and acidic blend of pistachios and preserved lemons that made the entire dish sing in harmony.

To me, there was no competition whatsoever. While I loved Team Old School's dish (and would gladly order it again in a restaurant), the hamachi crudo was a once-in-a-lifetime dish that made me see hamachi in a new way, offered up an innovative combination of flavors and textures, and, well, left me speechless.

Ellen said…
Wow Jace!
Those descriptions were mouth-watering. You SHOULD be a judge on that show again.
So tell me, what were Padma and Gail like?
Ellen
aka ellenronnie on twitter
8/06/2009

LittleJ said…
That is awesome. I wish I could have been there to see it. But since I wasn't, it was great to read your description of the activities as well as your take on the food - YUM!
8/06/2009

Annie said…
You have the coolest job. Thanks for taking us along on the ride and describing it perfectly, Jace! So jealous!
8/07/2009

Mazza said…
So jealous that you got to do this! Thanks for the amazing descriptions as always. Why a foodie publication/site hasn't snapped you up is beyond me. And I second that you should guest judge on Top Chef ON TV!!! :)
8/10/2009