The Doctor Dreams: First Look at Animated "Doctor Who: Dreamland"

The 45-minute animated Dreamland is slated to air this autumn on CBBC on BBC Two and on BBC HD channel in the United Kingdom.

Doctor Who: Dreamland, written by Phil Ford (Torchwood) and directed by Gary Russell (Doctor Who: The Infinite Quest), will feature the voices of David Tennant (once more reprising his role as the Tenth Doctor before leaving the series at the end of the year), Georgia Moffet (Spooks: Code 9, The Bill), and David Warner (Wallander).

But don't look for Moffet to reprise her role as the Doctor's daughter Jenny from Doctor Who. Tennant's real-life girlfriend will play Cassie Rice, a new companion for the Doctor. Project is executive produced by Russell T. Davies, Julie Gardner, and Piers Wenger.

According to the press materials, the Doctor arrives in Roswell only to stumble upon a "mysterious alien artifact" that leads him "on a mission to rescue Rivesh Mantilax from the threat of the Viperox and the clutches of the American military."

"Dreamland is a remarkable project and I'm thrilled with it," said Russell T. Davies in a statement. "Phil Ford is a wonderful writer and promises to send the Doctor into a whole new visual dimension."

The full press release from the BBC, and a larger image of the animated Tenth Doctor, can be found below. 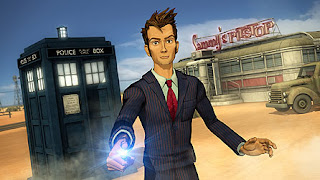 The BBC today releases the first image of the animated Doctor as he will appear in the new animation, Dreamland, which is due for broadcast later this year.

The six-part series will be premièred via the BBC Red Button on BBC One and the Doctor Who website (bbc.co.uk/doctorwho).

The 45-minute long animation will be broadcast in its entirety on CBBC on BBC Two this autumn and also on the BBC HD channel.

During a visit to a local diner he stumbles upon a mysterious alien artefact that leads him on a mission to rescue Rivesh Mantilax from the threat of the Viperox and the clutches of the American military.

Joining David Tennant will be Georgia Moffett (Doctor Who, Spooks) in the role of Cassie Rice – the Doctor's new animated companion.

David Warner (Wallander, Hogfather) also stars as the leader of the ruthless Viperox.

In the run-up to the animation, fans will be able to visit the Doctor Who website (bbc.co.uk/doctorwho) to follow a behind-the-scenes production blog on the making of Dreamland, giving the opportunity to follow the progress of the animation as it develops.

Dreamland was commissioned by BBC Drama Multiplatform and will be produced for the BBC by Brighton-based animation company Littleloud.

It is being executive produced by Russell T Davies, Julie Gardner and Piers Wenger, with Gary Russell as director.

Russell T Davies said: "Dreamland is a remarkable project and I'm thrilled with it. Phil Ford is a wonderful writer and promises to send the Doctor into a whole new visual dimension."

"To offer the ability to watch this brand new Doctor Who animation on so many different BBC platforms is a real treat for our audience."

Richard Deverell, Controller, BBC Children's, said: "This is a wonderful addition to the already fantastic portfolio of CBBC programming. Having talent like Russell T Davies and Phil Ford at the helm of this project will no doubt ensure it captures the imagination of CBBC viewers."

Award-winning channel CBBC also further reinforced its commitment to British animation as it announced that online portal Cartoon Works is expanding to become a new destination to première short-form content from the UK animation industry.

CBBC has also commissioned brand new animation Muddle Earth, based on the much-loved children's books by Paul Stewart and Chris Riddell, and Shaun The Sheep returns to screens this autumn in a series of new exploits.

BBC Red Button has provided interactive services on digital TV for the past 10 years and is now reaching an average audience of 11 million viewers a week accessing a whole range of BBC content.

It provides audiences with access to the latest news, weather and other general information, while also enabling the delivery of an enhanced experience across major sporting and entertainment events.

Tomer said…
Hmmm...I love the idea of the Doctor exploring Roswell but I wasn't that crazy about the last animated special. The animation itself felt very stiff and awkward and didn't really capture the true spirit of Doctor Who.
8/24/2009