Talk Back Redux: Which New Fall Series Are You Still Watching? 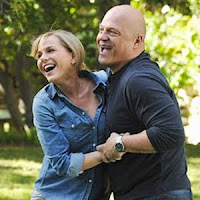 About two weeks ago, I asked readers to discuss which of the crop of new fall series they were still watching after sampling. I posted the question on the heels of the cancellation of FOX's Lone Star and ABC's My Generation, both of which were yanked from the airwaves after just two broadcasts.

It's rare for a network to go five-for-five when it comes to their freshman shows, but it also points to just what a middling season of television this has turned out to be thus far. A season where even NBC is giving a vote of confidence to mediocre series like The Event, Chase, and Outsourced... and ordering more scripts for Undercovers.

So now that the dust has settled a bit more, I'm wondering once again: what are you still watching a few weeks on from the initial question? What has fallen by the wayside in the time since? Are you still sticking with Nikita or No Ordinary Family? Curious to see whether Undercovers will improve?

What are you still watching? And what have you deleted from your TiVo Season Pass list?

Louise said…
While some new shows have lost my attention ('The Event,' 'No Ordinary Family') I'm still loving 'Raising Hope' and the ratings-challenged 'Terriers' on FX. I still can't decide if 'Hawaii Five-0' is worth keeping up with.
10/22/2010

SushiCatherine said…
There are only 3 new fall series that I even care enough to still watch. Those are Terriers (FX), which I think is the best television series this year, Boardwalk Empire (HBO) and Raising Hope (Fox). The show I am most worried about is Terriers. I remember the ratings for the first season of Nip/Tuck were dismal, but they took a leap of faith and renewed it. I hope FX takes that leap of faith with Terriers, because Terriers is 100% better than ANYTHING else on television.
10/22/2010

JanieJones said…
Terriers, Boardwalk Empire, Luther and The Big C (although I'm only sticking with it because I love Laura Linney's acting, it's been mostly disappointing).
10/22/2010

Jackie said…
Terriers is the only new show I watch and love for itself. Makes me sad that such a quality show has such low ratings, but I believe FX should give it a renewal if only because of the horrible promotion it received. I had no plans on watching Terriers because I had no clue what it was even about and only ended up watching due to twitter friends talking it up. I've also been keeping up with Law & Order: Los Angeles, but mostly because I've been a Skeet Ulrich fan for years.
10/22/2010

Jaymii said…
Boardwalk. I never really "dropped" any of the new shows, I simply just got bored and forgot. How disappointing.
10/22/2010

I ditched The Event. I started to watch ep 4, and didn't even make it through the "previously on" before I decided I didn't have any interest in watching the rest of the episode, or the show ever again.

Raising hope is by far my favorite new show, but there isn't much competition.

Nikita is still holding my interest, but it really needs to lighten up a bit. It's SO serious. It could take a tone page from it's lead-in.
10/22/2010

Liz A said…
Only show I'm current on is Top Chef: Just Desserts (does that count as a new show?).

Still like Nikita, but behind on everything else. I've got 2-4 eps still on Tivo for Terriers, Undercovers, Hawaii 5-0, Boardwalk Empire, Luther. But I can't get myself excited to watch them once I get through my returning shows. Which I think sums up this season.

Dropped The Event after 2 eps. Close to dropping No Ordinary Family. May watch the remaining eps of Outlaw, but seems pointless (both the show and the outlook for it).
10/22/2010

writergirl said…
Still DVRing and caught up on: Nikita, Terriers and the Big C.

Still DVRing but not caught up on and thinking about quitting: Boardwalk Empire and Undercovers. I'm always waiting for Undercovers to become more like my beloved Felicity and Alias, but it never happens. And the concept of Boardwalk Empire was better than the reality for me--although I haven't seen the last few episodes.

Still DVRing and watching but not really paying attention to when I watch: The Event and No Ordinary Family.
10/22/2010

Anonymous said…
I'm still watching "Nikita", although I can't tell if it's really any good or I'm just fooling myself into liking it. "The Event" feels like a better constructed but less interesting version of "Flash Forward," and I'm now a week behind on it. "Boardwalk Empire" is by far the best of the new bunch, although I really liked "Lonestar"...looking forward to "The Walking Dead" in another week!
10/22/2010

Anonymous said…
I check into "the event" on and off. I haven't watched any of the new network shows- as none of them have caught my attention. Rubicon, on AMC, that one became must-see TV, and I hope they renew it! It was intelligent, complex and addicting!
10/22/2010

Page48 said…
Just finished "Rubicon", which was brief, but excellent.

Gave up on H50 and "No Ordinary Family" after 2 episodes each.

Anonymous said…
Terriers, Boardwalk Empire, The Big C, Raising Hope and Rubicon. Terriers and Rubicon probably won't return next year because of low ratings. And i promised myself that if FX cancel Terriers i am gonna stop watching other FX series like Sons of Aanarchy and Justified.
10/23/2010

Anonymous said…
Boardwalk and Big C are it for me!

Emilie said…
Hawaii 5-0, Hawaii 5-0 and HAWAII 5-0!!! I am a big Alex O'Loughlin fan since 2007, so I'll watch anything he's on, plus I love the show itself. The writing is great, the humor is terrific and so is the cast! I also love Rubicon and Terriers for these same reasons. I've been saving these three shows on my DVR until they all come out on DVD. Also among the other new shows I'm still watching, I like Nikita, Detroit 1-8-7, Law & Order Los Angeles, Undercovers and Bluebloods. I still watch The Event, but I'm getting a bit exasperated with the Sophia storyline, although the Jason Ritter/kidnapped girlfriend aspect of it is exciting.
10/24/2010

Kat said…
Terriers is my favorite new show. I hope they keep in mind Dish subscribers can not watch FX when they are deciding Terriers fate. I love this show.

I have all episodes of The Event saved on DVR but have not watched yet. Now that NBC has decided to keep, I will probably watch.

I gave up on Blue Bloods, Undercovers, Raising Hope, Outsourced.

Mike & Molly is on the bubble and so is No Ordinary Family.

Still watching Hawaii Five -o, The Defenders, Nikita but none of them are must see for me.

Chris L said…
Nikita is my only new show this season. No Ordinary Family bored me. So did Hawaii 5-0. Undercovers held my attention for a couple episodes, but I gradually lost interest in that as well. Their all just so...I don't know. So-so?

Nothing really stands out about them - at least, in my opinion. As for Nikita...it's on shaky ground. It could go either way. This past episode was actually really good.
10/24/2010

Anonymous said…
I checked out a bunch of the new shows, and the only ones I'm still watching are The Event and Outsourced. I originally wrote off Raising Hope after the premiere, but gave it another shot last night, and it was pretty good. I might have to try it again. I'll watch LO:LA if I'm around and nothing else is on, but I won't make a point to watch it.
10/27/2010