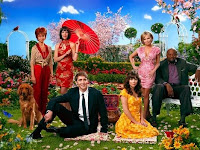 Welcome to your Friday morning television briefing. I'm still getting mail from readers about yesterday's announcement that FOX would stick Joss Whedon's Dollhouse on Fridays, as many are extremely upset by what they perceive to be the final nail in the coffin for Whedon's latest work.

As one door opens, another one opens. Or so the aphorism goes. In any event, should ABC opt not to order additional episodes of Pushing Daisies past their initial 13-episode commitment this season, creator Bryan Fuller will be heading back to NBC's Heroes, where he was on staff during the beleaguered series' freshman season. "I am exclusive to Daisies through the delivery of the 13th episode of our 13-episode order, which will be mid-January," Fuller told EW.com. "If Daisies isn't picked up by then, I will definitely be going back to play with my friends at Heroes." Sadly, it's now looking more and more likely that ABC won't be ordering more installments of the groundbreaking Pushing Daisies, meaning that I just died a little inside when I read Fuller's statement. (Entertainment Weekly's Hollywood Insider)

The CW has ditched plans for its Robin franchise. (Wahoo!) The netlet had previously announced that it had given a put pilot commitment to The Graysons, a retelling of the Robin origin story that would follow D.J. Grayson (ick) as a hotheaded teen, prior to his becoming Batman's Boy Wonder sidekick. Decision to kill the project came from Warner Bros. Pictures Group president Jeff Robinov, who originally gave the series his blessing but changed his mind. In a statement, a company spokesperson said, "The studio has opted not to go forward with the development of The Graysons at this time as the concept doesn't fit the current strategy for the Batman franchise." (Whew.) It should also be noted that Dark Knight director Christopher Nolan never signed off on the project though the decision came squarely from Robinov. (Variety)

Reiko Aylesworth (ER) is in talks to join the cast of ABC's Lost in a "major recurring role." If the deal closes, Aylesworth--best known for her role as Michelle Dessler on 24--will appear in at least four episodes of Lost as Amy, a highly successful "professional woman with a love for the outdoors who is looking for the right man." (Hmmm, to me that should read: female Dharma Initiative conscript. But that's just a guess on my part.) In other casting news, Amy Price-Francis (Californication) has been cast in a six-episode arc on Day Seven of 24, where she will play a coldblooded attorney working for Jonas Hodges (Jon Voight). (Hollywood Reporter)

David Morrissey (State of Play) has responded to rumors that he is being considered to replace David Tennant in Doctor Who. "As for any talk of me taking over as the next Doctor, well, if or when they do choose someone, they would have to be totally different to David - which I am," said Morrissey, who next appears on Doctor Who's Christmas Special, entitled The Next Doctor. "I play a character called The Doctor – a man who believes himself to be a Time Lord. It was great to be on board, because I’m a huge fan of the programme and of David Tennant." (Digital Spy)

FOX has announced their midseason schedule, which has Joss Whedon's Dollhouse and Terminator: The Sarah Connor Chronicles in a two-hour block on Friday evenings. (Televisionary)

Dylan McDermott (The Practice) has been cast in Jerry Bruckheimer's TNT cop drama pilot The Line, about a squad of undercover LAPD officers who are tempted by easy money. McDermott will play Lt. Andre Carter, who created the secret unit within the LAPD. He stars opposite Logan Marshall-Green, Omari Hardwick, and Nicki Aycox. (Hollywood Reporter)

ABC Studios has asked its series producers to trim their budgets by two percent and is leaving it up to each individual showrunner how the two percent cuts will be made. Producers have been asked to identify excesses that can be corrected immediately. NBC Universal is said to be under a similar initiative to cut three percent (or $500 million) of its 2009 budget. (Variety)

Emilio Estevez will guest star on CBS' Two and a Half Men, opposite real-life brother Charlie Sheen. Estevez will play a former drinking buddy of Charlie's who drops in for a visit. No air date has been announced for the episode. "My dad did the show a couple of years ago," said Sheen, "so it was only a matter of time until someone of my brother's talent could also come and play in our sandbox." (TV Guide)

Anonymous said…
Ugh. It makes me sick to think that Pushing Daisies could be over and Fuller's talents wasted on a show like Heroes. So wrong.
11/07/2008

The CineManiac said…
Honestly I don't want Pushing Daises to get cancelled, but if it does I'm glad to see that Fuller has a home to return to (And maybe he can bring it back to it's season 1 greatness)

(In full Weekend Update Mode) Dollhouse. Fridays. Really Fox? REALLY?!?!? So you've already given up on the show? Really? REALLY? Maybe if you're spending money on a show from one of the most beloved tv creators around you should not place it in the most canceled tv slot around. Really!
11/07/2008

Unknown said…
Does Friday really sound the death knell for a show anymore? Don't most people own a VCR if not a DVR by now? Shoot, I almost don't need cable at all since I can download everything over BitTorrent.

I'm still hoping for the network to order the back nine for Pushing Daisies but maybe I'm an eternal optimist.
11/07/2008

Noelle Cavanaugh said…
I am going to keep hope alive until I hear the official announcement of Pushing Daisies' cancellation. I know things look grim, and Bryan Fuller's assertion that he will return to Heroes if PD isn't picked up doesn't exactly inspire confidence. But maybe if I wish hard enough (and sign enough online petitions), my Daisies will continue on.

eAi said…
I don't entirely understand why US series can't have shorter series and still continue? Here in the UK, we'd never have a 21/22 episode series, and generally stick to 6, 8 or at most 14. Having this allows the length to be decided on creative grounds rather than forcing the creativity to fit the length, which often causes problems...
11/08/2008

Budgets are a huge factor in the difference in US series length vs. UK series length. The episodic budgets on US series are traditionally much higher than that of their UK counterparts. While some of the budget is recouped through the license fee that networks pay to the studio (for the right to air the program in question), there is still a huge gap between what the license fee pays for and the overall budget (a deficit).

Some of this (or in some cases like Lost all of this) is then made up by international sales of the series. However, there are some costs that are HUGE and have to be paid for upfront like, say, sets. These sets will be used in, say, all 22 episodes of a series but they cost millions of dollars to build and maintain, etc. Studios are able to amortize the costs of the sets by spreading them throughout the episodic budgets. Obviously, the more episodes you have, the easier this is to accomplish. If there were only 6 episodes of series, it would be much harder to amortize these costs in the long run.

Additionally, studios' focus was on that magic syndication number of 100 episodes; the longer the series ran the easier it was to sell into off-network syndication, especially if those seasons were comprised of 22 episodes. While the syndication market has shrunk considerably in the last ten years, the model is still working on the presumption that longer is better. It's also easier to sell advertising within long-length programs than within short-run ones.

UK series (with some notable exceptions like My Family) aren't team written, while all US series have large staffs of writers breaking stories in tandem. It would be extremely difficult for a UK writer to write all 22 episodes of a season him/herself, so the shorter-length runs have always made sense within that market. (The BBC model also worked because it was public supported via the TV license rather than ad-supported.)